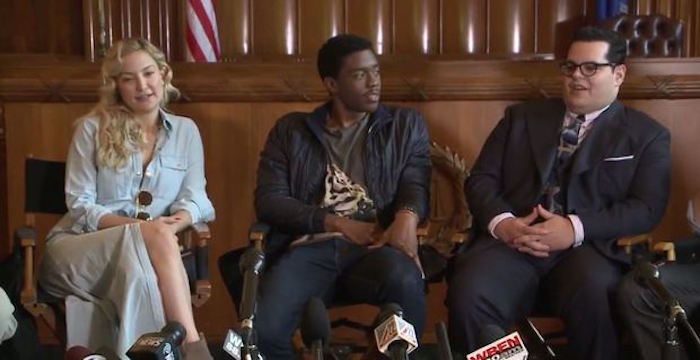 The July 4 weekend marked the end of filming for the movie “Marshall” in the Buffalo and Western New York area.

The movie is a biopic of Thurgood Marshall, the first African American Supreme Court justice. The cast features Chadwick Boseman, who played Jackie Robinson in “42.”

Filming began May 23 in Western New York at the LaSalle Branch of the Niagara Falls Public Library on Buffalo Avenue. The last day of filming was Friday, July 1. The cast and crew came together to share their experiences in Western New York and discussed some of their favorite things about the area.

Buffalo wings
While the cast and crew enjoyed many of the area’s restaurants, actor Josh Gad, known for voicing Olaf in “Frozen,” particularly loved the buffalo wings. “The movie takes place over about five days,” Gad said. “And because of your chicken wings, my character puts on an average of five pounds a day.”

Niagara Falls
Oscar nominated-actress Kate Hudson traveled to Niagara Falls in June, making the most of her visit by riding the Maid of the Mist and visiting the Cave of the Winds.

Canalside
Hudson said she enjoyed bike riding on Canalside during her day off.

The architecture
Why did the filmmakers chose Buffalo as their filming location? According to Hudlin, it was the architecture and the city’s commitment to preserving historic buildings.

The lack of traffic
“The no-traffic thing is amazing,” Kate Hudson said.

The 4 a.m. closing time
People also spotted some of the cast at bars on Allen street, WIVB reports. Actor Sterling K. Brown said that he’s not used to restaurants and bars being open until 4 a.m. “You kick it real hard,” Brown said of Buffalo locals. It probably helped that Buffalo is home to one of the top 10 cocktail bars in America.