Today is the day!!

STAR TREVOR JACKSON AND WRITER-DIRECTOR GERARD MCMURRAY TELL THE STORY BEHIND NEW NETFLIX RELEASE ABOUT THE POTENTIALLY LETHAL CONSEQUENCES OF HAZING AT HBCUS. 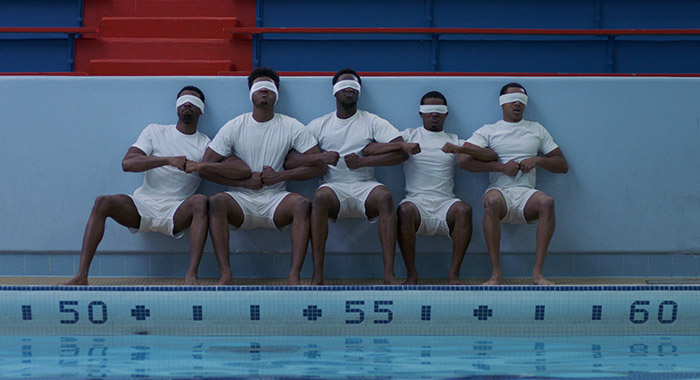 Pledging a fraternity or sorority is not the same as hazing.

Not only is hazing illegal, but the practice has claimed the lives of far too many young men and women across college campuses all over America, including historically black colleges and universities (HBCUs). These senseless deaths inspired Netflix’s compelling new movie Burning Sands, which premiered at the Sundance Film Festival in January and starts streaming on Netflix on Friday March 10.

Trevor Jackson (American Crime) stars as Zurich, a bright and outgoing pre-med student determined to successfully pledge the fictional Lambda Phi fraternity at his historically black college. Unfortunately for Zurich and his line brothers, the fraternity’s overzealous upperclassmen are power-drunk bullies who sadistically torture them at every turn.

Gerard McMurray, a producer on acclaimed film Fruitvale Station, directed and co-wrote Burning Sands, which also stars Oscar-nominated actress Alfre Woodard (Luke Cage), Steve Harris (The Practice), and Trevante Rhodes (Moonlight). But there are more reasons to stream this movie than its impressive cast. Jackson and McMurray talked to Rotten Tomatoes about the film — here are seven Burning Sands revelations they shared. 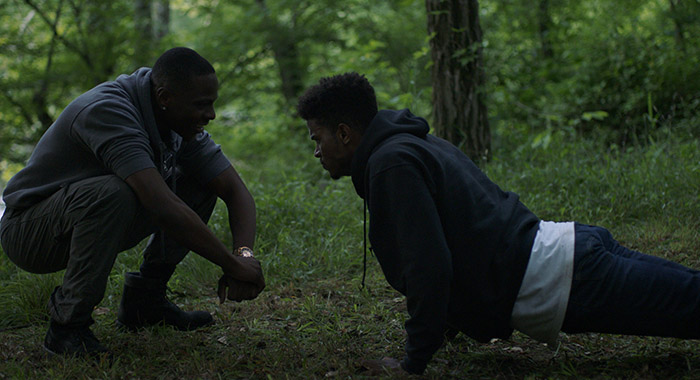 “I wanted to tell a story to create a dialogue,” said McMurray, a Howard University graduate and a member of the Omega Psi Phi fraternity. “I wanted to show young black men at a black college and the challenges they go through on the path to manhood.”

2. JACKSON IS A RISING STAR 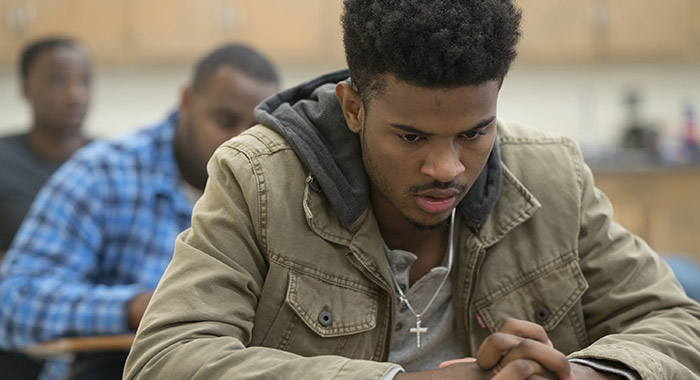 If you’ve seen season 2 of American Crime, you know the 20-year-old actor has a commanding presence. His ability to captivate is even stronger in Burning Sands, a film that capitalizes on his strengths. Jackson said he chose this project to convey a message.

“We rarely see black people in college,” he said. “You don’t see it on the news or social media and I feel like it’s a dope thing. And this movie really promotes brotherhood. It’s an incredibly told story.” 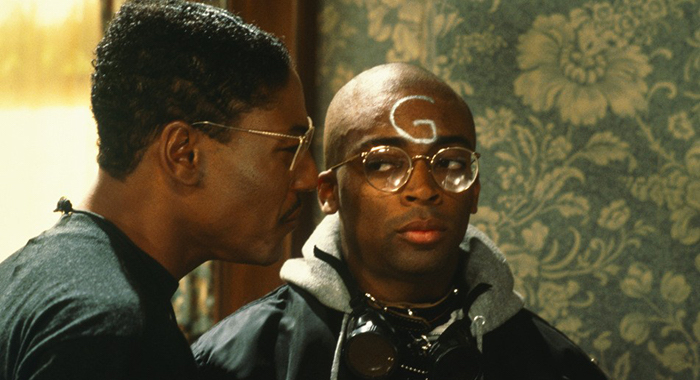 The 1988 comedic drama School Daze, which Lee wrote and directed, follows the hazing rituals of the fictional Gamma Phi Gamma fraternity. But unlike Burning Sands, the musically driven movie portrays hazing as a rite of passage instead of a life-threatening crossroad.

“I include step dancing and the Greek brotherhood just like School Daze,” McMurray said. “But the nuances are unique and so is the way I tell the story. No one dies in School Daze, but in real life people die all the time.”

4. WOODARD MADE EVERYONE BETTER 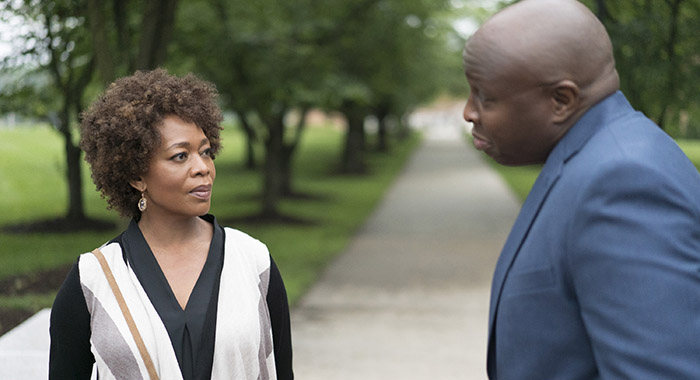 “I was excited but nervous,” McMurray said. “I didn’t know how I would handle a woman of her caliber. But she was very supportive of me as a first-time director. It was a very creative and collaborative process.”

Meanwhile, Jackson said Woodard helped him grow as an actor.

“I leaned a lot not just through our communication but also just watching her and Steve (Harris) do what they do,” he said. “I analyzed how they performed. It was amazing watching these two actors I grew up watching on TV. It’s still overwhelming just thinking about it.” 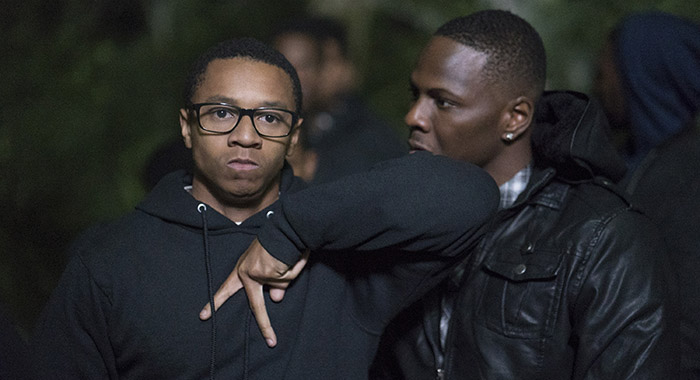 McMurray said fraternity brothers and others have questioned why he’s tackling the topic of hazing because they think it will tarnish the image of black fraternities and sororities. But the filmmaker disputes that.

“If you haven’t seen the whole movie, don’t pass judgment,” the New Orleans native said. “There is more to this movie than hazing. The brotherhood and the family I acquired made me who I am but that’s what separates pledging from hazing.”

6. AT LEAST ONE UNIVERSITY GAVE ITS BLESSINGS 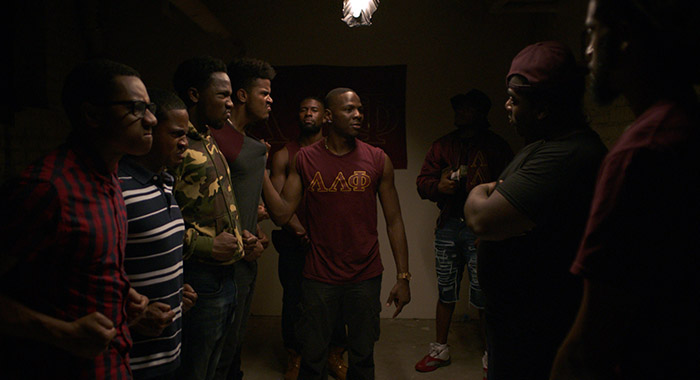 Because two Virginia State University students died while being hazed four years ago, administrators were all too happy to have McMurray use the school’s campus for the movie.

“They want people to see it, especially students, and think about the repercussions of hazing,” McMurray said.

7. JACKSON IS READY TO BE UPBEAT 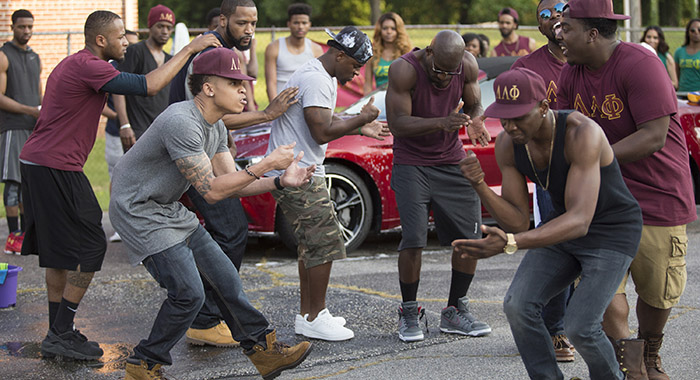 The subject matter behind American Crime and Burning Sands is very heavy. Now that Jackson has proven he can be portray dramatic roles, he’s ready to tackle a comedy or two, he said.

“I love having fun,” Jackson said. “Between takes, Gerard would be like, ‘Trevor, calm down.’ I’m always eating and I’m always happy. I feel like that balances me out. After filming this, I talked to my team and I was like, ‘Guys, we do need something a little light.’

“I can’t cry everyday,” he added. “My favorite actors — Denzel Washington and Michael Shannon — are people who go there. This is something I want to work at and I have a lot of work to do. I like going to places where I don’t go everyday but there definitely has to be balance.”