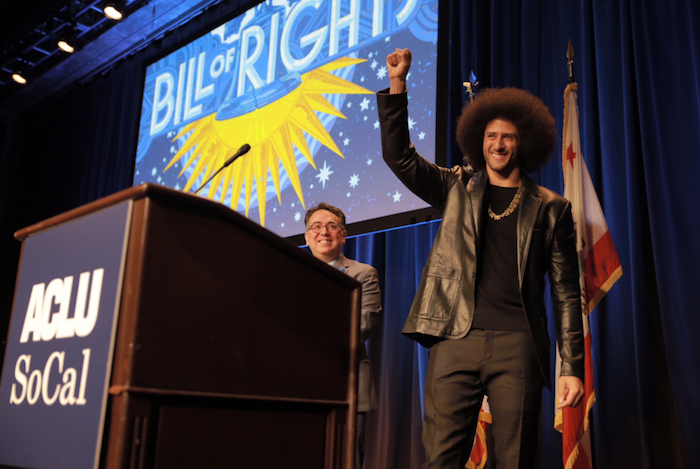 Presenter Billy Eichner put it succinctly when he took the stage at the ACLU of Southern California’s Bill Of Rights dinner last night. “In awards season in Hollywood, the Bill Of Rights Award is considered the precursor to the Golden Globe,” he joked. But he just may be on to something. This is a star-filled affair full of spirit and activism in the age of Trump, whose presence could be felt even if it was a room he would never dare step into. It also wasn’t a bad place to be seen if you also happen to have a movie or TV show in the hunt (among those I spoke with were Detroit’s Will Poulter and Crown Height’s Nnamdi Asomudha who had just been nominated for Indie Spirit and Image awards).

But much more importantly it felt like an energizing  evening that was really about something much greater than any trinket Hollywood could hand out. And on a lively and highly political night that featured awards for Jane Fonda, Judd Apatow, Viola Davis, Reginald Hudlin, Gina Rodriguez and Dolores Huerta, it was the surprise unannounced appearance of former San Francisco 49ers Colin Kaepernick who brought the house down  at the Beverly Wilshire Hotel.

With organizers saying his appearance had to be kept under wraps due to death threats and other security concerns, Kaepernick’s arrival onstage had the ambiance of a rock star being welcomed. With nary a Trump supporter to be found, he was greeted as the local hero for his controversial stand of taking a knee during the national anthem before NFL games, which pissed off a President and started a movement and led to many other players following suit.

After a raucous standing ovation upon receiving the organization Eason Monroe Courageous Advocate Award, Kaepernick seemed to be  in his element. “We all have the obligation no matter the risk, and regardless of reward, to stand up for our fellow men and women who are being oppressed with the understanding that human rights cannot be compromised, ” he said, sounding every bit like he might be thinking about running for office someday. 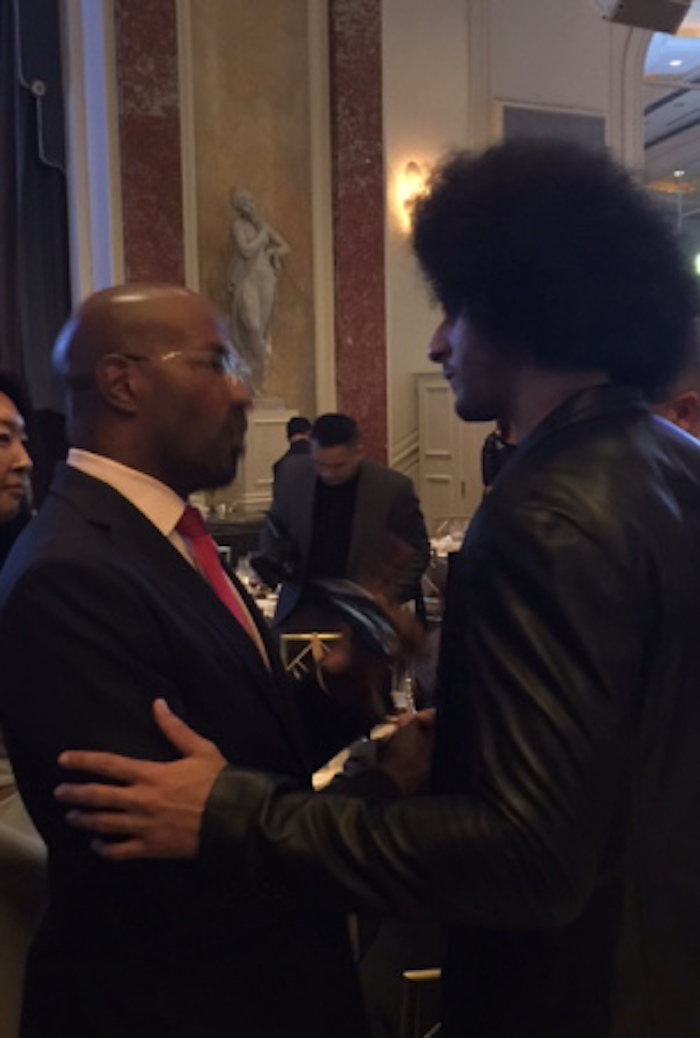 ACLU SoCal Executive Director Hector Villagra, who earlier in the evening had noted the ACLU has launched 56 lawsuits to date against  Trump Administration activities, introduced Kaepernick by saying, “He took a stand knowing some would criticize him, and he has been viciously and unfairly criticized. He has been called a traitor because too many  people in this country confuse dissent for disloyalty.” After the presentation at the dinner break, Kaepernick was literally mobbed by well-heeled fans trying to take selfies with him. Among those lining up for the chance was departing Open Road chief Tom Ortenberg, a longtime ALCU supporter and awardee.

In addition to Kaepernick, there were presentations before the dinner break of the Bill Of Rights Award to a emotional Rodriguez; a hilarious Apatow; and a riveting and compelling Davis, who cited Martin Luther King Jr’s inspiring “mountaintop” speech, given the day before he was assassinated in 1968 was a particular inspiration for her. She recounted stories of growing up so poor that her family was living with rats running through their apartment. She said that whenever she complains about feeling tired after an 18-hour shooting day, or taking for granted winning yet another award, she realizes there is a much different definition for success. “I have two mottos for 2017, and they are ‘I am doing the best that I can, and ‘I am going to leave it all on the floor’.”

Rodriguez was tearful in detailing what the ACLU recognition meant to her as a Latino representative. “For those of us who make our living in Hollywood, the images that affect our fellow humans are our responsibility. So I accept this award and in doing so accept my responsibility to present a positive image to all those who look to me for inspiration. I will never stop trying to make this country a place where people of all races and ethnicities can feel accepted,”  she said.

As for Apatow, he wasted no time in wishing the worst for Trump. “Do you feel weird? We so want there to be a pee tape,”  he said, in reference to the infamous dossier rumored to detail incriminating sexual activity on Trump’s part when he was in Russia for the 2013 Miss Universe Pageant. 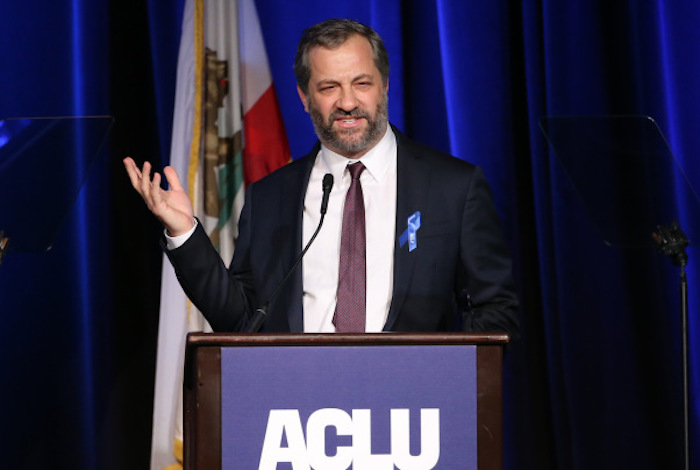 Producer-director Reginald Hudlin also received a Bill Of Rights Award  after a rousing performance by Common and Andra Day of “Stand Up For Something,” the anthem from Hudlin’s current directorial achievement Marshall; the song was written by Diane Warren and is getting lots of Oscar buzz. Hudlin did a shout-out to Warren, who was sitting in the audience next to actress Frances Fisher, with both wearing #StandUpForSomething shirts.

Legendary United Farm Workers of America activist Dolores Huerta, herself the subject of Dolores, an Oscar-hopeful documentary this year, received a standing ovation upon receiving the Lifetime Advocate For Justice Award and led the audience in a spirited chant of “We’ve Got The Power! People Power!” 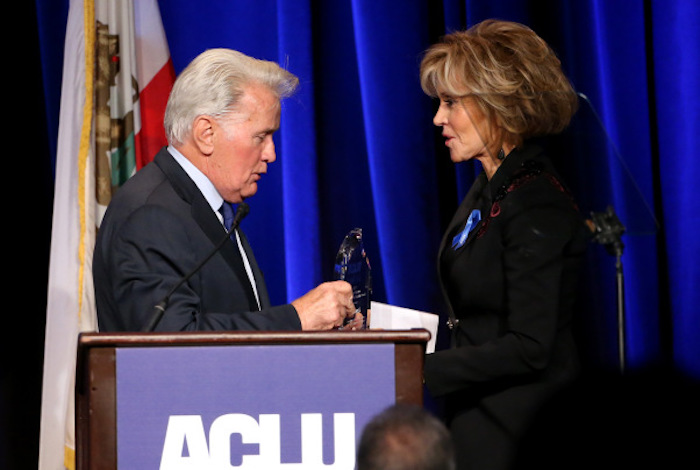 Fonda was last to come up after being introduced by her Grace And Frankie co-star Martin Sheen, who said of the star-activist, “One heart with courage is a majority.” She recounted how the ACLU  has been  with her all her life. “So has the FBI,”  she laughed.  “After this election I felt like I had been hit by a truck, but when in doubt become an activist.”   Fonda received the Ramona Ripston Liberty, Justice and Equality Award  and quoted a line from poet Pablo Neruda to describe the determination and confidence she still has after nearly 50 years of social work and protest. “They can cut all the flowers but they can’t hold back the Spring”. 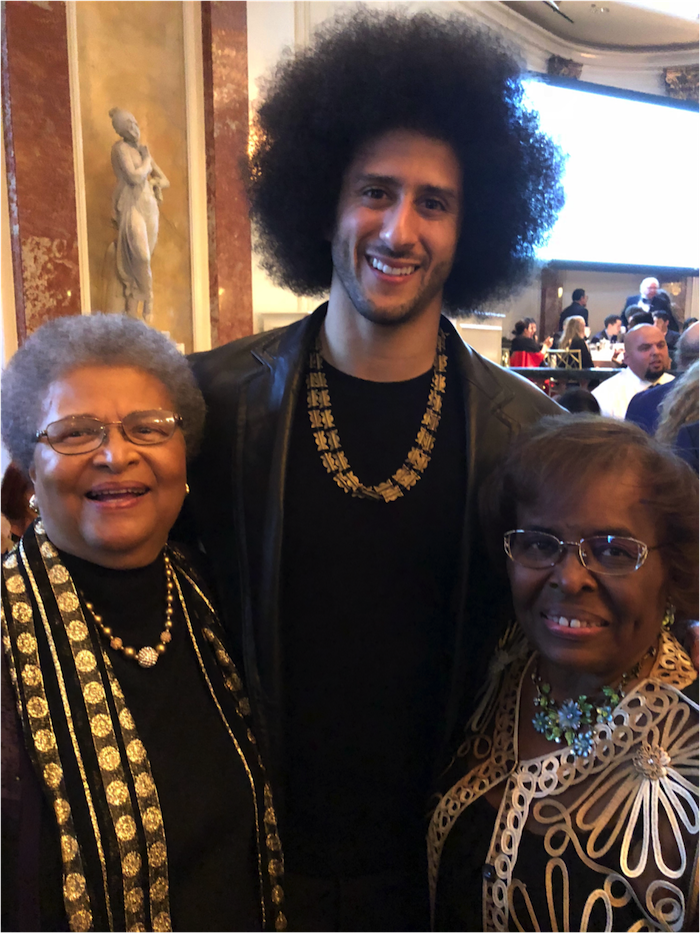 My mom and her dear friend Annette May with Colin Kaepernick. 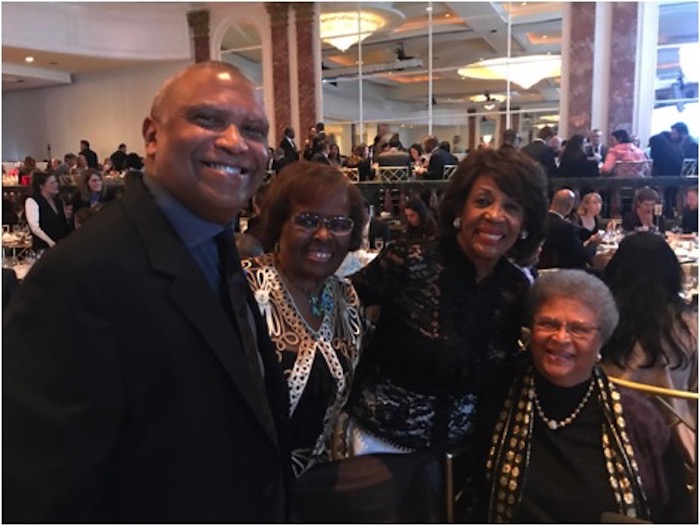 Me, Anette May, Maxine Waters and my mom. 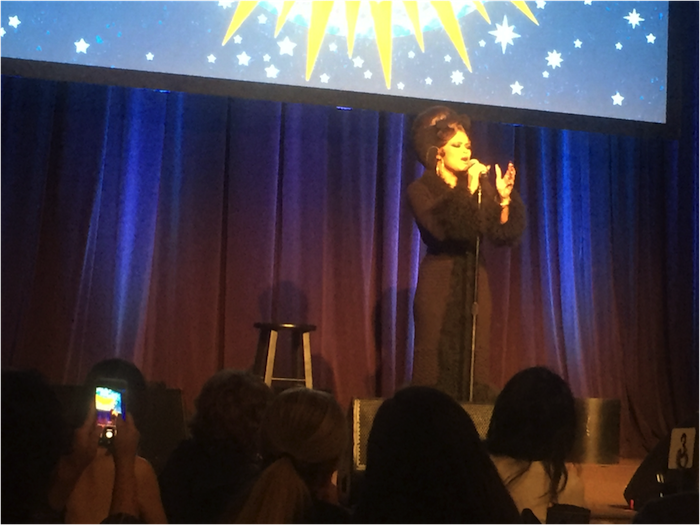 Andra Day SLAYS “Stand Up For Something” with Common.