Reginald Hudlin is the director of the hit comedies House Party, Boomerang and The Ladies Man, and the writer of Marvel Comics’ Black Panther animated series, which is now on DVD from Shout! Factory.

FLICK ATTACK: So, Black Panther. Were you a comic book geek in childhood?

FLICK ATTACK: And even today?

HUDLIN: Yeah, I mean, it’s so funny … what I’m about to say is a “nerd conversation,” but there’s debates over geek vs. nerd, right? I always go, “I’m a nerd, not a geek, because nerds actually have sex.” So, you know, that’s how I separate myself. 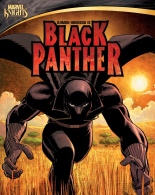 FLICK ATTACK: Was Black Panther a favorite of yours growing up?

HUDLIN: I loved all comics — Marvel, DC, Gold Key — but I loved Captain America and I loved Black Panther, because I felt like they were essentially the same character. They were both these noble symbols of their nation, and I just love that idea.

FLICK ATTACK: And you have Captain America in this show, as well.

HUDLIN: Oh, absolutely. In fact, we actually took that one scene and expanded it out into a four-issue miniseries with Black Panther and Cap’s first team-up, where they fought Red Skull and the whole gang, because I just love those characters so much.

FLICK ATTACK: Having written for film and comics and now animation, how hard was it to go from one medium to another? I presume they each have their own challenges.

FLICK ATTACK: Do you have a favorite among those?

HUDLIN: No. For me, you find a story you’re excited about and find what’s the best medium for that story. 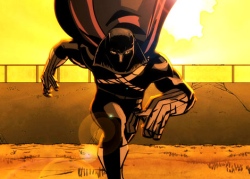 FLICK ATTACK: As a kid, did you notice that nearly all the African-American superheroes — few as they were — had to have “Black” in their names, like Black Panther, Black Lightning, Black Vulcan?

HUDLIN: For me, I was a huge Black Panther fan; there was nothing “token” about him. I just thought he was a character with a tremendous amount of integrity and stood on his own. I was not so much into Black Lightning, although certainly, perfectly fine idea. Black Vulcan the cartoon character was always sad to me, because he didn’t have any pants on. And also, the name — I mean, at least Black Lightning, that is sort of a phrase. Black Panther, there is an animal called the black panther. Black Lightning is a phrase. Black Vulcan is idiotic. It’s like Black Goliath: inappropriate. I mean, “Really, dude, Black Goliath? He can’t just be Goliath?” That’s when it all goes wrong.

FLICK ATTACK: I was surprised at how much humor there was in these episodes of Black Panther. It made me think it would work well as a feature film. Are there any discussion to do that in live action?

HUDLIN: Yes, I think it would be a great movie. There have been talks of a Black Panther movie for 15-plus years. I remember after my first film, House Party, I did a deal at Sony Pictures, who at the time had the rights to Black Panther. I remember reading some of the scripts, and they were horrible! They had Black Panther as a guy living in the projects of America. He had no idea about his African heritage. I just said, “Look, whether I’m involved in this movie or not, you can’t do this! This is evil!” Which is probably not the most politically correct way to express your opinion, but I’m not one to bite my tongue. So, yes, lately there’s been talks. That’s really Marvel’s decision and they play their cards close to vest. I wrote this miniseries and made this DVD so that whether there’s ever a Black Panther movie and whether I’m involved in it or not, people can look at that and go, “Well, that’s what Black Panther is! That’s who he should be!” and I’m happy to have succeeded in that. 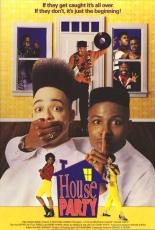 FLICK ATTACK: You brought up House Party. Isn’t it about time for a House Party reboot?

HUDLIN: I’ve been getting that a lot. Usually, I get people asking for a Boomerang sequel, but yes, the House Party conversation has been popping up a lot. Fortunately, I do actually have an idea, so I guess this month, I need to actually write that idea down.

FLICK ATTACK: You know, after four of those movies, Kid and Play — I still don’t know who’s who.

HUDLIN: Well, Kid had the hair. 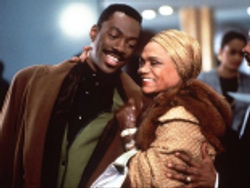 FLICK ATTACK: And since you brought up Boomerang, how does it feel to know that there’s an entire generation of men who can’t look at a woman’s foot without vomiting?

HUDLIN: They’re looking at the wrong toes! Well, there’s also a generation of women who get pedicures all the time because of Boomerang. I’ve been complimented on both sides.

FLICK ATTACK: You’ve spurred the economy when it comes to mani-pedis. 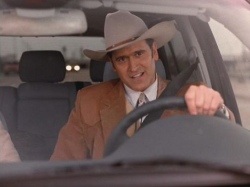 FLICK ATTACK: Serving Sara: Were you a fan when you cast Bruce Campbell or was it just a case of the first actor you saw who fit into the hat?

HUDLIN: I pleaded for Bruce Campbell. I was like, “You know, man, I know it’s not your kind of movie. I just want to hang out with you.” The irony is I found the DP for House Party from watching the trailer of Evil Dead II in Times Square. I just said, “Whoever shot that is the guy I want to work with.” 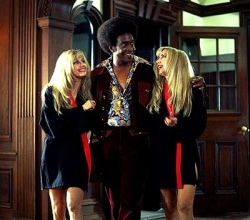 FLICK ATTACK: The Ladies Man. First of all, I think Tim Meadows is a funny guy. But, if you assume that The Blues Brothers is at the top and It’s Pat is at the bottom, where would you rate The Ladies Man among the SNL movies?

HUDLIN: Wow. That’s a tough, tough thing, because … do you put Blues Brothers at the top or do you put Wayne’s World at the top?

FLICK ATTACK: I’m going with Blues Brothers, because Wayne’s World doesn’t quite hold up as well. Some of its jokes are so 1992.

HUDLIN: See, I haven’t seen either in a million years, so I’m just going to keep them safe in my shuttered memory. I loved Blues Brothers when I was a kid, I loved Wayne’s World as a young man. Where does The Ladies Man fit in that pantheon? You know, I never saw It’s Pat, so I don’t know if we need to be sitting next to It’s Pat or defending the honor of It’s Pat. I can’t speak to that. It’s weird: The Ladies Man is not as funny as it should be, even though Tim Meadows is hilarious. There’s a lot of funny, funny scenes in it. The greatest gift of working on the movie was working with Will Ferrell. Magnificent. Actually, I did the movie because it has a musical number in it.

FLICK ATTACK: Oh, it wasn’t Julianne Moore as a clown?

HUDLIN: That came later. Nice! That was just bonuses after I got onboard. You know, it’s not what it should be, but there are 14-year-olds who worship me because I made Ladies Man, so who’s to say? 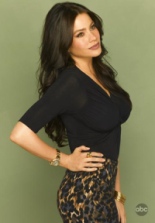 FLICK ATTACK: More recently, I’ve seen your name in front of a lot of TV shows I watch. So I want to know which show you directed had more awkward pauses, Modern Family or The Office?

HUDLIN: Oh, wow, good one. Good, good question. Both shows are faster-paced than you’d think, but I guess The Office wins for sheer number of awkward pauses. By season six when I got onboard, they had mastered the uncomfortable double-take. The show is great because the characters feel so much shame.

FLICK ATTACK: Who would you rather work with again: Jamie Foxx or Sofia Vergara’s breasts?

HUDLIN: C’mon now. I worked with Sofia, not her breasts, so technically speaking, I wouldn’t be working with them again. But if I were to work with them, I wouldn’t ever stop.

FLICK ATTACK: I’ve got one last question for you. 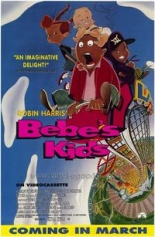 FLICK ATTACK: I want you to know you made my life miserable. It was the summer of 1994. That’s when Bebe’s Kids came out on VHS. I was working at Blockbuster Video at the time, and our store had three copies, and there were always, always rented. I fielded calls all day long, people came in wanting it, and when I told them we were all out, customers every day took their anger out at me. And when they couldn’t rent it, they’d want to buy it and ask how much it was, and I’d say, “$99.95,” because that’s how much VHS tapes cost back then, and they’d get even angrier at me! So my question is, will you apologize?

HUDLIN: I think your manager should apologize. What kind of dick gets that kind of demand and doesn’t get more copies?

HUDLIN: Right. This corporation said, “This thing really isn’t that popular, and despite enormous evidence to the contrary, we’re going to ignore that.” That’s the story of that whole movie. It was frustrating, because Cool World came out the month before, and that didn’t work. And so Paramount said, “We’re out of this animation thing,” and I was like, “Wait wait wait! We had a movie! We had a movie!” It performs incredibly well on DVD and cable. I was at BET and they were like, “Oh, my God, we just can’t show Bebe’s Kids enough.” I still tell Paramount about it and they don’t get it. Why can’t the signal connect to the brain? There’s some kind of disconnect.

FLICK ATTACK: Well, they didn’t work at Blockbuster that summer, that’s why.

HUDLIN: This is the problem. They need more guys like you in the corporate offices.

FLICK ATTACK: They don’t ask me.

HUDLIN: “— Rod at Blockbuster told me …”