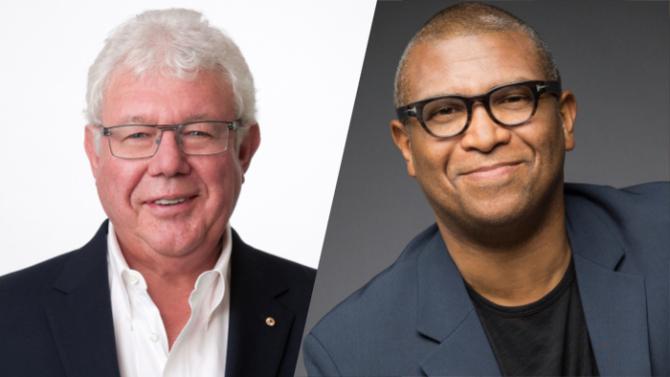 The day after the 88th Academy Awards, first-time Oscarcast producers David Hill and Reginald Hudlin said they were exhausted. However, they sounded upbeat about the creativity in the show, the reaction of execs at ABC and the Academy, and at the expanded demographics of the viewers despite a drop in total viewers. The two producers talked with Variety about their challenges and rewards — but didn’t address whether they would return.

What was your opinion of the show’s audience?

Hudlin: We are both Chris Rock fans, and we wanted to youth-ify the audience and broaden the demos, so that was very satisfying. We had a lot of goals: the opulence and elegance people associate with the Oscars; and we wanted a fast-paced show. And because of the political and racial issues this year, we wanted to address them in a forthright manner. And we wanted to showcase the honorees in a way that was fresh and to respect all the branches. And we wanted a show that was funny and touching. I think we did those things.

What was the Academy reaction?

Hill: They were stoked. I spoke with several governors. My favorite was Jeff Kurland. He was quite effusive and he’s a tough audience.

Hudlin: One of my favorite reactions were from some of the top folks who work in sound, who really appreciated the extra effort we put in to present their category. To excite the branches that often get overlooked — that was a particular pleasure.

Hill: After the show, we saw Ben Sherwood and Robert Mills, and the new president Channing Dungey, they were all stoked. They loved the show and loved the pace of it. That was a key priority — that the show moved and changed.

What were some of the highs and lows of the experience?

Hill: We were really pleased at the look of the show. We had an arranged marriage between Derek McLane, the celebrated Broadway designer who has been doing the sets for several years. And I’d worked with (visual artist) Cindy Hauser ages ago, so we wanted a look with the majesty and grandeur of practical sets and the excitement and versatility of graphics. Last night, you saw how they complement each other. It enabled us to do so much within each act. It was the look and structure of the show which gave it appeal, due to combo of the two.

Hudlin: They were real MVP’s for the show. Derek’s been doing sets for the past three years and we were happy to have him back and Cindy was a great addition. They showed that one plus one equals five. The show’s look changed from act to act, from award to award. It created a level of visual excitement that kept the audience engaged.

Hill: There are 142 separate pieces that make up the Oscars; each one of those mini-acts has to be dreamed up, organized, overseen. It has been three months of solid slog, at mixing bays, organizing talent, and constant meetings with Chris and his writers, who have been cloistered away. That’s 142 little shows. What you saw was four months of slog, seven days a week. Our greatest disappointment was the Andy Serkis segment. We wanted him to appear to TV viewers as Gollum, then switch to Caesar, then reveal him in a dinner suit. But the technology isn’t there, so we gave up on that five days ago. However, we have found a company in Norway that might be able to do it in the next 12-18 months.

Hudlin: It was exciting to go to the edge of technology and live performance. That entire act, which was devoted to sound effects and visual effects, that was really satisfying. It was exciting to show off those departments that are  the cornerstones of so many movies. It was great to show them off in new ways.

Would you produce the Oscars again?

Hill: It’s too soon to ask!

Hudlin: I’m picking up my renewed passport, so there’s a vacation in my immediate future. And I’m shooting a movie this spring and David has the “American Idol” finale. So for awhile, we will be returning to our “day jobs.” At this point, I’m excited about little things — like Saturday and Sunday.