Marshall: Why Chadwick Boseman decided to play another historical figure 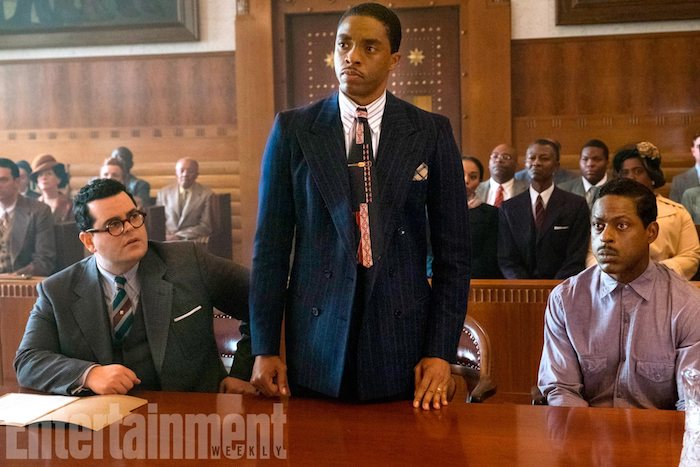 To read more from our Fall Movie Preview, pick up the new issue of Entertainment Weekly on stands now, or buy it here. Don’t forget to subscribe for more exclusive interviews and photos, only in EW.

After playing Jackie Robinson (42) and James Brown (Get On Up), Chadwick Boseman wasn’t looking for another biopic. Yet he couldn’t resist the role of Thurgood Marshall in Marshall, in part because the script focuses on a racially charged case early in the future Supreme Court Justice’s career: Joseph Spell (Sterling K. Brown),  a black chauffeur, is accused of sexually assaulting and trying to murder his boss Eleanor Strubing (Kate Hudson). Marshall, then an NAACP lawyer, is forced to depend on white attorney Sam Friedman (Josh Gad) after the judge forbids him to speak.

Below, Boseman previews his turn as the civil rights hero in Marshall.

CHADWICK BOSEMAN: All of them were different situations. I think with Marshall, the difference in it is that I had already said I was not looking to play a real person and especially not an important real person, a famous real person. He could’ve been somebody [whose] story we didn’t know, or some character we dug up from history that we weren’t aware of. But, to play Thurgood Marshall was just not in my scope, not in my focus. I was convinced of it because of the script, and I was convinced of it because [director Reginald Hudlin] essentially kept talking to me about it and [producer] Paula Wagner kept talking to me about it.

The other thing that kept me from doing it is that I didn’t feel like I looked like the character, but they convinced me that this story was not about his whole life; it was more about this particular case. How he looked, which may be a factor in other iterations of his story, if it was a longer version, it didn’t matter as much in this one. So, I think it was all those factors that drew me specifically to this one. The other two [roles had] small things. It’s not like I’m necessarily looking for important black figures. Like James Brown, it just kept calling me at a certain point when I saying no; it was like James Brown was calling me himself. And Jackie Robinson, there was no way in the world I wasn’t going to do that. So, it was sought after not just by me but by a lot of people. They all were a little bit different in how they came to me.

What about the script attracted you to this film? Was it the fact that it was focusing on this one particular case?
Yeah, it was a more obscure case, and I felt like the banter between Marshall and Sam Friedman was really interesting and fun. It turned into a buddy movie as opposed to just a courtroom drama. It turned into a whodunit at certain moments, as well. I think it had a lot of flexibility in it to keep the audience interested, and I felt like it was a character I had not played before. I’m always looking for a challenge. Each one of these roles has been its own challenge. The thing I think I loved the most was the fact that he has to work this case without talking. He’s gagged. It’s like being a boxer, having one hand tied around your back. To quarterback this thing with another lawyer who is inexperienced was really interesting to me.

This movie does feel like a buddy comedy in places. Can you describe Marshall and Sam’s relationship?
Marshall is much more experienced than he is. So, he is in some ways a mentor to Sam, and he’s antagonistic toward [him] at times as well. I think it gets to the point where there’s a mutual respect because they’re on the same road, they’re fighting the same battles; they have a common enemy. But, I think for a greater part of the movie, Sam is gaining, and he has a need to gain it as well, Marshall’s respect for actually doing this, for actually battling it out in a courtroom. For a large part of the movie, it’s like if Thurgood could do this without him, he would. He definitely would do it without him. So, he’s a nuisance to him for at least half the movie. That makes for a lot of fun at the end of the day. You know, a lot of times you see movies now where the black guy is the sidekick. In this case, it’s switched where it’s not that Sam is a sidekick but he’s definitely not Batman in this situation. I think all of that allows us to look at ourselves and look at race and laugh at it in a certain way. Again, that part was the most fun, working with him, and also working with Sterling, even though our scenes weren’t as fun, but he’s a great actor as well.

Did you guys do anything to work on that chemistry together or was it there from day 1?
I think it was sort of there from the beginning. He’s a great actor, like I said, and I like bouncing off of actors who have the skill to do it, who have the skill to improv, who have the skill to play around. We listen to each other. I think it definitely grew as we went along as we continued to play together. [We] went out to eat with each other a few times. You get to know people that you work with. I don’t think it was like we tried to do anything extraordinary. It was just in the course of filming and being in Buffalo, New York, it’s not a whole lot to do, but finding those things to do in certain moments, it helps you.

What do you hope people take away from this movie after seeing it?
It’s an uplifting movie in a lot of ways. What I enjoy most is the two of them working together. That’s the important thing for us to see is that people who have different views can come to a point where they find what’s important and they work for that. I think that is the most of important thing to take away off the top of my head. And just the sense of who Thurgood Marshall was. He was once known as the Joe Lewis of the courtroom. I think of if you can get a sense of his courage and his willingness to fight yet believing in the system, actually, then you got what we were going for.