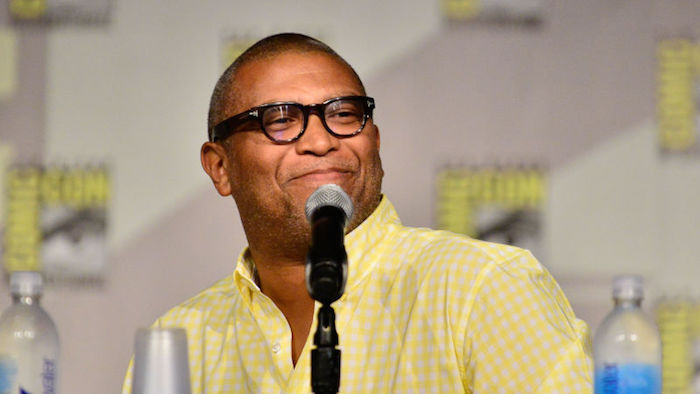 Editor’s note: This excerpt from Marvel’s Black Panther: A Comicbook Biography, From Stan Lee to Ta-Nehisi Coates (published by Diasporic Africa Press, 2018) talks about the impact black filmmaker Reginald Hudlin had on the character. For the first 32 years of its existence, the Black Panther—created by Marvel Comics legends Stan Lee and Jack Kirby in 1966—had been written by whites. Christopher Priest and Hudlin, two very talented black writers, drastically changed the direction of the character when they took over his adventures in 1998 and 2005, respectively. Under their collective direction, the character—the king and head priest of a Bast-worshipping, xenophobic African nation who had never been invaded by European colonialists—was infused with an African-centered, self-determining ethos. In his run, Hudlin decided to shake up the Marvel fanbase by making the character a truly “Black” Panther, an unapologetic African man openly opposed to white, Western supremacy.

With the Black Panther happily in vogue, I wanted to point out two important stories written by filmmaker Reginald Hudlin, the former BET executive who made that Black Panther animated miniseries in 2010.

The first story is “Black to the Future,” in the first-ever Panther annual published in 2008. The plot: in one possible future, Hudlin shows one of the Panther’s and Storm’s sons marrying the U.S. President, the daughter of former Avengers leader Luke Cage! This story, much of it told in flashback, answers an honest, real-world question: how did Wakanda escape being colonized without going to war against the entire Western world? The answer: the Wakandans made a pact with the white European colonial powers: if you don’t make war on Wakanda, Wakandans will turn a blind eye to the Trans-Atlantic slave trade and European colonialism of the rest of Africa.

The story, which balanced Wakanda’s past and possible future, seemed to be a return to the serious European colonization themes of Hudlin’s first story arc, “Who is the Black Panther?” a story which he adapted to that cartoon (and has since been novelized).

Captain America/Black Panther: Flags of Our Fathers, a 2010 mini-series drawn by Denys Cowan, the African-American artist who was one of the co-founders of Milestone Comics, expands on that story greatly. It tells a tale of white/Aryan racism and American militarism from the point of view of Gabriel Jones, the sole Black member of Sgt. Nick Fury’s “Howling Commandos” U.S. Army Ranger squad. (This the same military unit Steve Rogers led in the first Captain Americamovie.)

In this story, Captain America and the Howling Commandos are sent to prod Wakanda to the side of the Allies in World War II. Azzuri, the Black Panther (T’Challa’s grandfather), tells the Americans that Wakanda will remain neutral. Meanwhile, the Red Skull and other Aryan supervillains under his command—portrayed as unapologetic white supremacists and open racists—attempt to invade Wakanda, wanting its vibranium.

(Of course, America wants the vibranium, too; Fury tells Jones to spy for America and steal a sample.)

Jones, who is as impressed with Wakanda as Azzuri and the Wakandans are with him, has to decide whose side he will ultimately serve.

As a writer, Hudlin would not win any awards for subtlety. But looking at his complete body of Panther work, why he chose such a ham-fisted but potent approach was not hard to understand.

Hudlin clearly saw comic book writing not as a novel with pictures or a forum for deep psychological insights, but as a romp through the imagination, with the opportunity to strike pop satire notes and illustrate socio-political points. In a way, his approach was not that much different from (Panther creators) Stan Lee’s and Jack Kirby’s in the 1960s, before comic creators became enamored with literary pretentions. Also, Comics were not Hudlin’s day job, so he could—and did—have fun.

In terms of public reach, Hudlin made a much greater mark on the character than anyone before him combined.

Hudlin not only kept the character alive in a title, but because of the digital comic/animated series that aired on BET (with a small-but-important assist from the Panther’s recurring appearances on Avengers: Earth’s Mightiest Heroes,the animated series which aired on the Disney XD channel from 2010 to 2013), he singlehandedly made him Black America’s best-known Black superhero not named Static or Blade. Black Americans who had never gone, and perhaps never would go, into a comic book shop now knew who the Black Panther was by name; they had seen or heard about the digital comic/animated mini-series that was sold in stores, aired on BET, and, as of 2018, is still available illegally somewhere online. The fact that the Panther was unapologetically Black in that mini-series significantly added to that popularity.

The filmmaker, a huge Black comic book fanboy, did the job he set out to do: he kept Panther’s A-list standing among comic book fans while making him an A-lister in the 21st century Black popular imagination, right next to 20th and early 21st-century Black fantasy male icons like John Shaft, Hawk, and Blade.

And notably, with the creation (by Hudlin) of T’Challa’s sister, Princess Shuri, who grew into a strong, competent, grown-ass African woman warrior in her own right, he made the Panther title reflect Black feminism in a stronger way. No longer were Black women characters in Black Panther relegated to girlfriends/wives/fiancées, kidnap victims, scorned women, sarcastic teenage sidekicks, or sexy, mostly silent bodyguards.

Until T’Challa’s film debut in 2016’s Captain America: Civil War, it was Hudlin’s (animated) Panther that was the one most non-comic book-reading Black people knew about.