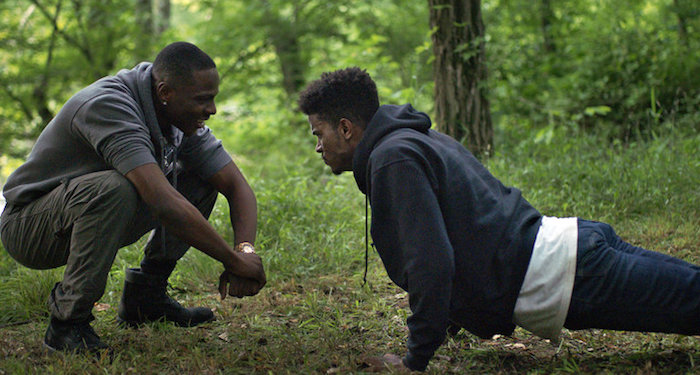 Toward the end of the new Netflix movie “Burning Sands,” five young pledges of a fictional fraternity make their way through a wooded area before older fraternity brothers stop them at the entrance to a barn. As the doors are opened, one fraternity brother welcomes them to “hell night.” They are then relentlessly shoved, hit and paddled until one pledge collapses and begins foaming at the mouth.

It’s a relatively rare depiction of hazing onscreen, though it’s not unusual for television and film to use collegiate life to dissect thorny subjects. As hazing injuries and deaths periodically make headlines, “Burning Sands” and “The Quad,” which just wrapped its first season on BET, are timely explorations of the real repercussions of the violent ritual. Set on the campuses of historically black colleges and universities, these two projects have also prompted discussions over their representation of storied black organizations and life at these schools. A forthcoming documentary, “Tell Them We Are Rising: The Story of Historically Black Colleges and Universities,” by Stanley Nelson, will explore the place and importance of the institutions within the context of American history.

“Burning Sands” follows a group of young men during the final week of pledging as they bond while doing community service and other tasks. Hazing also plays a prominent role as pledges are repeatedly struck — the bruises both temporary physical marks and badges of honor of earning their membership.

“You have people who will try to do anything in order to become validated, and so there’s a value in them pledging,” Lawrence C. Ross Jr., author of “The Divine Nine: The History of African American Fraternities and Sororities,” said in a telephone interview. “On the other side is the feeling and allure of power on the person who is the big brother or sister with this idea that hazing is transmitting some sort of values.”

Gerard McMurray, director of “Burning Sands” and a member of Omega Psi Phi, said showing the violence was essential to convey the movie’s message. “The truth is the truth,” he said in a telephone interview. “I wasn’t going to sugarcoat it or water it down. It was important to show those things so people could know this is reality.” In some of the more violent scenes, sound design plays a critical role in depicting the brutality without showing its full extent.

“The Quad,” focused on a new dean navigating old traditions and financial troubles, has explored murder, sexual assault and hazing. In most cases, the violence takes place offscreen, which was the case for the hazing of freshmen band members.

“It’s so much more frightening to wonder what happens behind closed doors, and to let your imagination as a viewer decide,” said Felicia D. Henderson, executive producer of “The Quad.” “I wanted to make sure that the story wasn’t about seeing the violence but how do we effect change.”

The projects show how these types of events have the potential to be a vehicle for change or a missed opportunity for dialogue and action.

On “The Quad,” the university president (Anika Noni Rose), is relentless in her pursuit of truth and accountability. Upon receiving confirmation of the band hazing, she works to have the code of conduct amended to include stiffer penalties for violent behavior. In “Burning Sands,” Dean Richardson, portrayed by Steve Harris, takes a less active stance. When asked by Zurich, a pledge played by Trevor Jackson, to help end the hazing before the start of hell night, he retorts, “humiliation builds humility, and one more night won’t kill you.” Alfre Woodard plays a professor who offers emotional support to Zurich, encouraging him to help foster change after becoming a brother. (The movie ends in a cliffhanger of sorts, leaving the audience to wonder whether the pledges become members.) 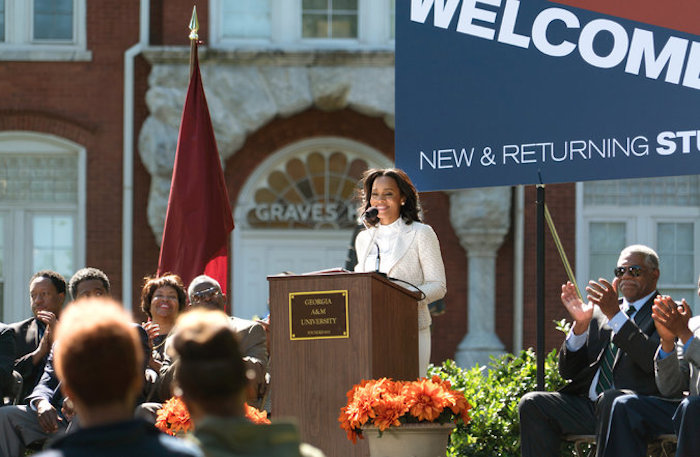 Anika Noni Rose as a university president in “The Quad.” Credit Annette Brown/BET

Highlighting the challenges for college students seeking validation and belonging at a time of newfound self-discovery and freedom, both projects have found support on social media — “The Quad” for addressing sexual assault, and “Burning Sands” for continuing the discussion over initiation processes in Greek organizations.

Still, there have been concerns. In a letter to Debra Lee, the president of BET, William R. Harvey, Hampton University’s president, said the show “feeds a false narrative about the irrelevance” of historically black colleges and universities. At Virginia State University, Mr. McMurray was “booed and jeered” at one point in a discussion after a screening of his film, according to The Chesterfield Observer, with some students asserting that it reinforced stereotypes. In a joint statement in response to the movie, the National Pan-Hellenic Council, an organizing body for historically African-American fraternities and sororities, said it did not “condone, support, or encourage the production of movies, books, or any type of social media that promote hazing.”

Mr. McMurray said that he briefly considered the various responses to his work but moved forward without reservation. “Sometimes you have to take a stand on some things, and I knew I would have to deal with the repercussions. I was at peace with that.”

Mel Jones, a producer on “Burning Sands,” said that greater self-reflection is critical to changing the culture around hazing. “A lot of it is, ‘I’m going to turn a blind eye to it because if I don’t then I have to indict myself for what I’ve done.’ If now people are saying this is wrong, how do you rectify that with yourself?” she said in a telephone interview. “It’s more on an individual level of being able to say, ‘I was young and dumb, and we didn’t actually have to do these things’ — that takes a lot of maturity.”

She added: “At the end of day, being part of any organization isn’t worth anyone’s life. I think we can all agree on that.”