When Edgardo Miranda-Rodriguez brings his superheroine La Borinqueña teams up with the heroes of the DC Universe to help deal with the impact of Hurricane Maria on Puerto Rico, some unexpected faces will be in the crowd of heroes coming to the island’s aid.

In a story co-written with Reginald Hudlin for Ricanstruction: Reminiscing & Rebuilding Puerto Rico, Miranda-Rodriguez will bring Static and Icon back into print for the first time in years — and legendary artists Denys Cowan, Bill Sienkiewicz, colorist Chris Sotomayor and letterer Taylor Esposito will be right there with them.

“I got to write with Reggie Hudlin, who’s a great writer and filmmaker and storyteller in his own right,” Miranda-Rodriguez told ComicBook.com. “We got to write a Milestone story together, and I got Denys Cowan to write it and Bill Sienkiewicz to ink it and Chris Sotomayor to color it!”

“Reggie and I have been talking about that for a while,” Miranda-Rodriguez admitted. “I was like, ‘wow, this has got to be good. Nobody has seen these characters in an actual story in years.’ Even though they’re doing Milestone this year, this is the first time people have seen these characters.” 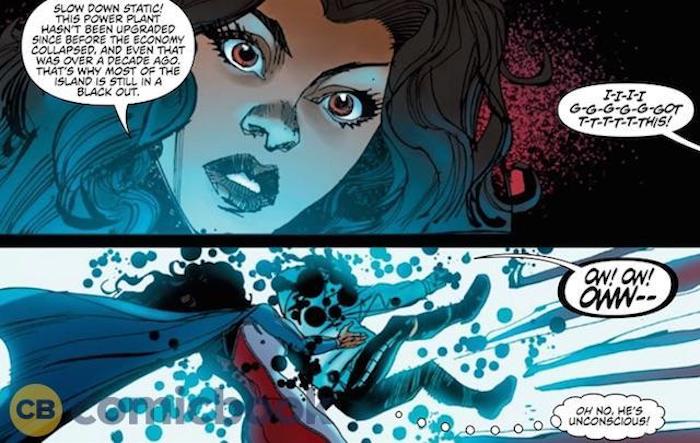 Milestone is planned to make its return to DC’s publishing line later this year as part of the Earth-M project, in which Milestone veterans from the past will join with new creators to bring new characters of color to the DC multiverse.

You can pre-order Ricanstruction: Reminiscing & Rebuilding Puerto Rico at Amazon. The book will be released to the public on May 23, although may make its debut at convention appearances with Miranda-Rodriguez before then.

When the imprint comes back later this year, its launch book will be titled Milestone, and will create the foundation and over-arching storyline for future Earth-M titles in the same way The Wild Storm has done for DC’s Wildstorm imprint. The series, from writer Reginald Hudlin and artist Ken Lashley, will focus on Icon and Rocket and will feature other classic Dakota Universe characters from the ‘90s.

Panelists shared more details on other titles readers can expect, including:

Static Shock, an ongoing series from Hudlin and Kyle Baker, focusing on 14-year-old Virgil Hawkins, a kid with a love of comics and science who develops dazzling, electric superpowers.

Duo, a new Earth M miniseries written by Greg Pak, introducing the twisted story of a couple sharing one body for eternity.

Love Army, a miniseries with story by Hudlin, about a secret army of women with amazing abilities and super-strength, sworn to protect the planet.