‘Thank You for Your Service,’ ‘Marshall’ Show Hollywood Can Work Toward a Better World 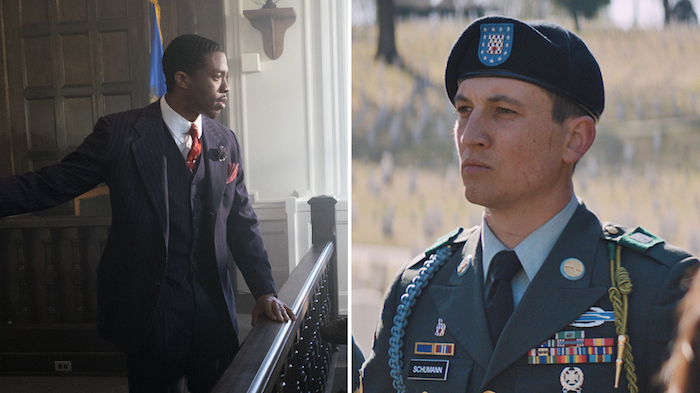 Recent news about Hollywood has centered on jaw-dropping behavior (Harvey Weinstein, Kevin Spacey, et al.). So it’s nice to remember that there are decent people around, making movies that do good work.

Open Road’s “Marshall,” about Thurgood Marshall, and Universal-DreamWorks’ “Thank You for Your Service,” about real-life Iraq war vet Adam Schumann, are awards contenders, but they’re also going beyond that. Each film has done outreach to dozens of groups, to entertain and to help make a better world.

Producer Paula Wagner says if people are aware of Marshall, it’s because he won the landmark Brown v. Board of Education case and he was the first black justice on the Supreme Court. But the film takes place in 1940, early in his career before those milestones. “Nobody knew this case,” says Wagner, “but it touches on issues that we’re still dealing with,” including racism, anti-Semitism and a legal system that is often more hindrance than help.

The film landed with Tom Ortenberg and Open Road. Tang Media bought the company in August, just as “Marshall” was getting ready for release. Luckily, Donald Tang likes the movie and supported their plans for 100-plus screenings over several months. “Marshall” has been shown to church groups, law schools and to such companies as J.P. Morgan Chase and Apple to encourage conversations about corporate diversity.

A key target has been schools. One example: On Oct. 2, the movie was screened for 1,100 Southern California students. That was one day after the Las Vegas massacre, and emotions were high; the movie (directed by Reginald Hudlin, scripted by Jacob Koskoff & Michael Koskoff) helped the students focus their thoughts and feelings and started conversations about positive action. “It was one of the most moving experiences of my life,” Wagner says.

Similarly, “Thank You for Your Service” has stirred up emotions and gratitude at more than 50 screenings for veterans, their families and lawmakers.

Jason Hall, writer-director of “Thank You,” learned a lot about post-war experiences when he wrote the 2014 “American Sniper,” directed by Clint Eastwood. So for the new film, about the hurdles that vets face when they return home, he reached out to vets to set up screenings before the Oct. 27 opening.

Hall knew the film would stir emotions, “but their reaction wasn’t what I anticipated,” he says. “When you get a lot of them in a room, it became a shared communal experience.”

A recent screening on the Universal lot confirmed this, with animated vets remaining long afterwards to talk with Hall and discuss the film with each other. War veterans often have trouble conveying their experiences, both in battle and in the return home — and they don’t want people to worry.

“This movie does their talking for them. One veteran said, ‘You told our story; this experience is behind a wall that nobody else knows about.’”

Another key screening was for U.S. Secretary of Veteran Affairs David Shulkin and his team. The film’s depiction of VA hospitals in 2008 isn’t flattering; after the screening, VA workers vowed to use the film to get improved conditions and better funding.

The film will be shown next week for the Congressional Veterans Caucus in D.C. The co-chairman of that group is Rep. Mike Thompson (D-Calif.), a Vietnam vet who’s been working to secure better care for veterans with TBI and PTSD. He believes the film can personalize those struggles better than any words can.

These movies are not alone. With “Wind River,” for example, Acacia Entertainment has severed ties with the Weinstein Co. and any profits formerly earmarked for TWC will now go to the National Indigenous Women’s Resource Center. Open Road’s “The Promise” and its companion documentary “Intent to Destroy” were made as pet projects of Kirk Kerkorian, with all producer proceeds going toward the goal of raising awareness of the Armenian genocide.

Yes, people in Hollywood can be vile. But there are others who are working to make things better.