Boomerang at 25 Isn’t Just a ’90s Eddie Murphy Flick; It’s a World We Want to Live In 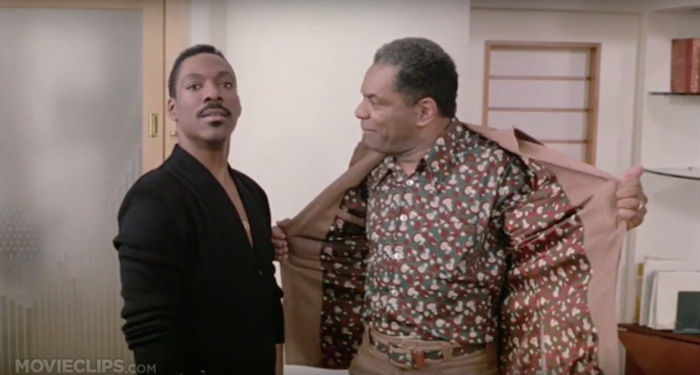 It is a Friday night on the set of 1992’s romantic comedy Boomerang. In between shooting takes for the now classic Thanksgiving-dinner scene, Eddie Murphy and cast trade jokes about what would happen if Mr. and Mrs. Jackson (John Witherspoon and BeBe Drake) had sex in the bathroom of his character Marcus’s luxurious New York City condo.

Director Reginald Hudlin wraps shooting for the week, but he cannot shake the thought: “What would happen if the Jacksons had sex in the bathroom?” He imagines all the ways it could be shot, how to make the joke land without being crass, how to use the moment to poke fun at respectability politics and buppydom. He rushes to set the following Monday to find that Murphy has been having the same thoughts. They improv the scene on camera dozens of times, each time funnier than the one before. It’s this black creative synergy that makes Boomerang the FUBU of romantic comedies.

This summer, Boomerang turns 25. To celebrate, The Root spoke with Hudlin about the film that made every black person in America dream of moving to New York City to work for an all-black company.

“That period in which Boomerang was made was a period of unapologetic blackness,” Hudlin told The Root. “A black upscale romantic comedy was something that audiences really wanted to see, that they needed to see.”

Boomerang centers on Marcus Graham, an ad executive at Lady Eloise, an all-black cosmetics company. The self-proclaimed “Eleganza mack daddy of the month” has a thing for beautiful women with pretty feet—and for mock turtlenecks (I counted 10). Marcus’ life is upended when his new boss, the suave Jacqueline (Robin Givens), flips the supposed gender script and beats the player at his own game. The wounded lothario finds comfort in the arms of Angela (Halle Berry), the pretty, boho-lite art director with a not-so-secret crush on Marcus. After a dramatic breakup—à la “love shoulda brought your ass home last night”—Marcus and Angela reconcile and stroll off together into the Lower East Side sunset.

The love triangle involving Jacqueline, Marcus and Angela is actually the least interesting aspect of the movie.

Viewers are seduced by the sumptuously black world of the Lady Eloise company and its employees. In their world, life moves to the rhythm of a banging R&B soundtrack. Everyone is fresh dipped in cashmere overcoats, silk blouses and haute couture tuxes as they partake of martini lunches and attend black-tie launch parties. Sexual romps are as commonplace as first-class business trips to New Orleans and the Caribbean. And didn’t we all want to have an uppity auntie who lived on an estate named Lavender Hill?

White critics panned Boomerang, saying that it was unrealistic in its portrayal of black life on celluloid. Some went so far as calling the film “racist” and a “fantasy,” saying that companies like Lady Eloise didn’t exist. In other words, how dare Hudlin and Murphy create a film where everyone from the mailroom workers to the CEO was black and about that corporate life?

Hudlin knew that black audiences of various socioeconomic statuses would relate to the film.

“[Boomerang is] a film that rings true to people,” Hudlin says. “Anyone who knows Johnson Publishing or Burrell advertising or Motown Records or BET or Radio One—there’s any number of black media businesses where black folks work and live our lives.”

Every black person who had been raised on a steady diet of Ebony magazine went to the theater opening weekend to consume all of the film’s brown-sugary deliciousness. We made Boomerang a box-office smash. It grossed $70 million domestically and $131 million worldwide.

Murphy made a string of films in the late 1980s and early ’90s that, like Boomerang, presented fully imagined black universes. We wanted to visit Coming to America’s (1988) pastel-painted land of Zamunda. Fans have re-created Zamunda in music videos, step shows and birthday bashes. Harlem Nights (1989) made us nostalgic for the 1930s, when black hustlers wore suits “tailor-made to fit” and ran the dopest night spots in all of New York City. These films share a theme: black people in control of our own communities. We triumph over the insidiousness of white supremacy, and black love—romantic and familial—wins.

We needed to see that then. We still do.

This is why we keep rewatching Boomerang—reciting the lines verbatim—every time it airs on BET, and why it remains one of the top-grossing black romantic comedies of all time.