25 Years Later- The Making of ‘Boomerang,’ and The Burden Faced By Black Filmmakers 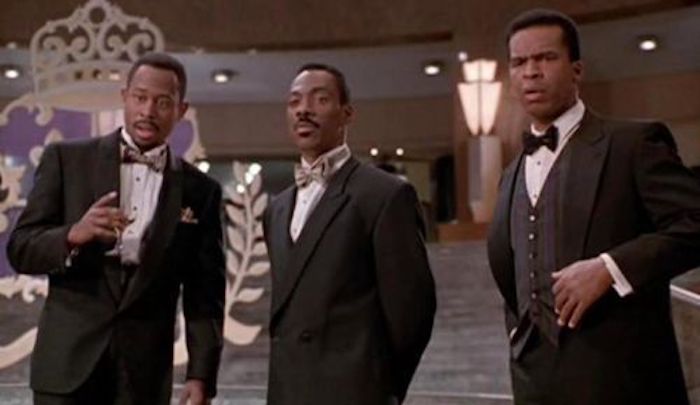 “When I seduce you, if I decide to seduce you, don’t worry…you’ll know,” she mutters as she gazes into his eyes. Jacqueline Broyer has an impactful effect. She has legs that’ll make you tremble, paired with a smile that makes you quiver. Her eyes, regardless of the words coming out of her mouth, are telling of her actual thoughts. Her business suits are flashy but never classless. She’s career-driven and you shouldn’t dare try to interfere with that. She’ll fit you into her schedule when it’s beneficial for her to do so. Yes, she’s a fictional character, but she embodies characteristics that’ll humble any real man—not just Marcus Graham. Boomerang turns 25 this year and is widely overlooked, despite being one of the greatest romantic comedies of all time. Robin Givens’ portrayal of Broyer is only the surface of what makes the film a timeless hit. It was considered a letdown compared to Eddie Murphy’s previous starring roles, which included Beverly Hills Cop, Trading Places, and Coming to America, but quietly, Boomerang is still the highest grossing black romantic comedy.

Playing on the idea of sexual role reversal, Boomerang tells the story of an advertisement executive named Marcus Graham, who has a reputation as a womanizer—he loves ‘em and then leaves ‘em for a variety of reasons, including “hammer time in her shoes,” as he shamelessly tells his friends Tyler (Martin Lawrence) and Gerard (David Alan Grier). Things get interesting when he has to work under the guidance of the damn-near irresistible Jacqueline Broyer. After becoming involved with each other, Marcus falls for her hard, and who wouldn’t? But it is then that he learns she shares the same non-committal attitude as he does, and probably does it better.

Before it came to fruition, Boomerang was no easy film to get off the ground. According to director Reginald Hudlin, it was a bit challenging to convince the higher ups that a romantic comedy would excel with Eddie Murphy cast in the lead role. Hudlin recalled an exec telling him flat out at the studio, “Look. I don’t know how you’ll make a romantic comedy with Eddie Murphy with that big nose and big lips.” Keep in mind that this was uttered at a time when Eddie was the biggest name in Hollywood, commanding no less than $15 million through an exclusive deal with Paramount Pictures. But with a cast that included a then relatively unknown Halle Berry, Martin Lawrence, David Alan Grier, Eartha Kitt, and Grace Jones, he knew he was onto something special. The movie is also responsible for helping launch the career of Chris Rock, with a small but notable part as Bony T; the loud-spoken mailroom worker that knew everyone’s business. Ironically, Rock got his start just five years earlier in Beverly Hills Cop II, thanks to Murphy spotting him at a comedy club performing stand up. “Years from now, people won’t believe we had all these people in the same cast. If you were there, you felt it,” Hudlin told Blackfilm. “You felt that this was an explosive moment and that all these people were enormously talented and would go on to great careers.”

Boomerang was supposed to represent the next phase of black filmmaking and with a 40 Million dollar budget, it was considered too big to fail. Murphy presented the idea to the Hudlin brothers, who at the time had only experienced minor success with House Party, to help him capture the essence of the story. Boomerang was being heralded as his impending comeback despite him still being a big name at the box office. “Comeback?” he sneered when asked by Entertainment Weekly. “From where? Where am I coming back from? What does that mean, comeback? Am I viewed as this cat who used to be funny and isn’t anymore and this is my last shot to be funny? If I was perceived that way, no one would tell me.” His hope for the film was to mainly focus on black talent. The film subtly drew the spotlight to the power and allure of black women, so casting the legendary Eartha Kitt as Lady Eloise—the aging overly sexual figurehead of the cosmetics company made perfect sense. Grace Jones as Strangé, the outrageously disrespectful and demanding model that was written specially with her in mind, effortlessly steals every scene she’s in.

“Eddie needs to flex his muscles that can help black people get into this industry. Clout isn’t just getting the best table at Spago. How’s that helping your people?” —Spike Lee, LA Times 1989

At the height of Eddie’s career, he began to get criticized for not shining the spotlight on other black talent. He responded to Lee’s critique specifically: “Progress is a gradual thing in this town. We’ve made lightyears of progress in the past five years. And Spike, Keenen, and Robert Townsend are great examples,” he told LA Times. “Ten years ago, those guys couldn’t have gotten pictures made in this town. But since I’ve had success at the box office, every studio has been looking around for a black guy of their own who could make hit movies.” He added, “I’ve made lots of contributions to help my people prosper. But I’m not a politician. I’m a businessman and a film maker.” This was right before the release of Harlem Nights; another star-studded black film that starred Murphy, Richard Pryor, and Redd Foxx, released just three years before Boomerang. Eddie was in a comfortable position, but the pressure was on. 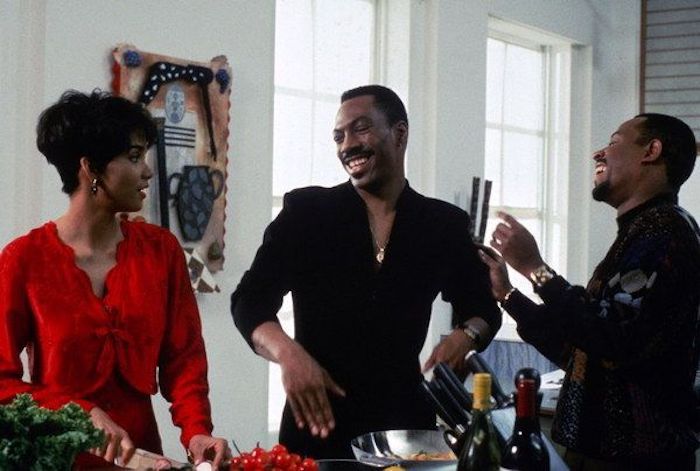 ”If it makes a huge amount of money, they’ll go, ‘Well, it’s not really a black film. It stars Eddie Murphy. If it fails — which it won’t — they’ll call it a black film. It only becomes black if it fails.” —Director, Reginald Hudlin

After Boomerang‘s release on July 1, 1992, the reviews were mixed, but mostly positive. While some publications praised Murphy’s stripped-down performance, others focused on the racial composition of the film. Two weeks after it’s release, Murphy wrote a piece for LA Times, where he said the film is the “latest outlet for those critics who feel it necessary to demean and simplify the achievement of black people.” He added: “Boomerang is a romantic comedy revolving around the lives of successful black people who work for a successful black company. Some people obviously have a problem with that, for the movie has been called a ‘fantasy’, a ‘reverse world’ and ‘racist’.”

Although aiming to uplift black culture, the film was pelted with plenty of unfair criticism. Ultimately it grossed over $131 million in total, and paved the way for plenty of black rom-coms to come. The film was called “imbalanced” and “uneven,” but highlighted both upscale and new talent in a way that hadn’t been exemplified before.

The story is still a relevant reality in dating, and deserves more praise for it’s relatable characters. We know a “woke” friend or two like Tyler, or a friend as timid and hesitant as Gerard, with embarrassing parents that love to coooordinate. We know a sweet, shy, and artsy girl like Angela with attitude, and we even know a guy like Marcus, who might be looking for love in the wrong places. And just around the corner is a girl like Jacqueline, waiting to turn his world upside down.