A Libertarian Review of ‘Marshall’ 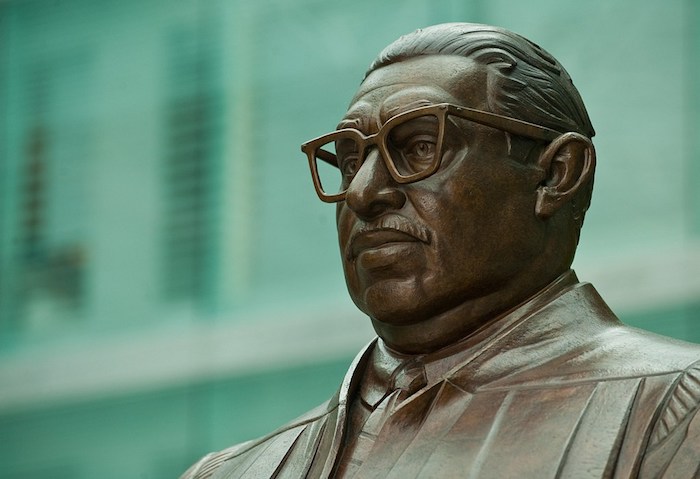 The Constitution of the United States of America is without a doubt a milestone in the development of liberal thought, but it is far from perfect and has failed to actually limit the power of the federal government. It is taken for granted, although it was not always intended to protect anyone who was not a white male.

Thurgood Marshall, as played terrifically by Chadwick Boseman in the historical courtroom drama Marshall, made it his mission to reclaim the letter of the law to protect people who were historically excluded from exercising their constitutional rights. The film takes place 1941 and tells the story of Connecticut v. Joseph Spell. As the only lawyer for an NAACP in need of donations, he is tasked with representing Spell (Emmy winner Sterling K. Brown, The People v. OJ Simpson: American Crime Story), a black chauffeur accused of raping Eleanor Strubing (Kate Hudson), the wife in a prominent local family, and throwing her into a Greenwich, Connecticut river.

He is reluctantly joined by local insurance lawyer Sam Friedman (the amiable Josh Gad), who wishes to remain out of the limelight and away from a racially-charged case that could impact his family and law practice. The determined and aggressive Marshall kicks him into gear, reminding him what is at stake, forcing him to think about injustices happening at the time at home and in Europe on the eve of the United States’ entry into the second Word War.

In the courtroom they are met with a prejudiced judge (a belligerent James Cromwell) who questions the usefulness of having an out-of-state lawyer represent the defendant, but to make the trial appear to be fair, he allows Marshall to stay as long as he does not speak in court under the threat of being held in contempt. Marshall and Friedman, faced with a major uphill battle, must expose the prejudice and secrets that exist just under the surface in Greenwich to prove the innocence of their client.

Director Reginald Hudlin (House Party, Boomerang) returns to the director’s chair after a fourteen-year absence and brings us a crowd pleasing and inspiring history lesson about the man who would go on to be the first African American Supreme Court justice. The script, by Jacob Koskoff and Michael Koskoff, unfolds the story in a well-flowing manner and they develop interesting characters that audiences can care about. The tone, despite its subject matter, is rather light and optimistic. Bosemen delivers another outstanding turn as a major American icon after performances as Jackie Robinson in 42 and James Brown in Get On Up, respectively. He and his co-star Gad work well off each other, with Gad providing much of the humor.

While Thurgood Marshall was by no means a libertarian, we can still respect his fight against the institutional racism in the North and the South, and his devotion to providing justice under the law. The film forces us to recognize that rights haven’t always been upheld by the state and must be defended. In this regard, Marshall has a lot to offer libertarian audiences.

* Justin Tucker is a writer and Libertarian activist living in Chicago, Illinois. He is a Staff Writer for URChicago.com and is the Chair of the Libertarian Party of Chicago.