BLACK PANTHER: RETURN OF THE MACKS 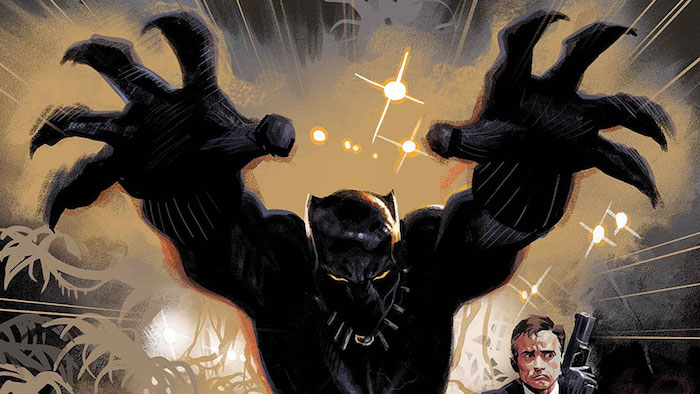 With writer Ta-Nehesi Coates doing stellar work on the current BLACK PANTHER series and T’Challa making his solo film debut in February, three of the most iconic writers to ever pen stories for Wakanda return to the hero they helped make a household name; in February 18’s BLACK PANTHER ANNUAL #1, three distinct eras of the Panther will be revisited.

Don McGregor, the foundation-building scribe behind stories like “Panther’s Rage,” teams up with artist Daniel Acuna for a tale that takes King T’Challa out of Wakanda and onto the streets of New York for a gripping mission. Then, former BLACK PANTHER writer Christopher Priest will be joined by artist Mike Perkins for a story starring friend of Wakanda Everett K. Ross. And last but not least, the man behind “Who is The Black Panther?” and the director the recent film “Marshall”—starring the MCU’s T’Challa himself, Chadwick Boseman—will reunite with artist Ken Lashley for a sequel of sorts to their classic, “Black To The Future!”

We reached out to each of these legends to pick their brains about coming to a character they left such indelible marks on.

Marvel.com: What excited you most about returning to Black Panther?

Reginald Hudlin: When I was told that the book would feature me, Christopher Priest, and Don McGregor each doing Black Panther stories, it just felt historic. I knew I had to be a part of it.

Christopher Priest: Nothing. Seriously, nothing at all. It was terrifying.

My original run, especially the Marvel Knights installments, have finally found an audience. When we were actually doing the book, we literally couldn’t give copies away. There was enormous sales resistance and a lot of literal hate—and threats—from fans outraged that we gave Panther an iPhone. Seriously; there was this anti-tech backlash, “purists” who, from what I could tell, were confusing Black Panther with Tarzan. Panther is not Tarzan.

So, in those days, I’d spend a lot of energy engaging these fans and trying to please, please, sir, get them to go read FANTASTIC FOUR #52 and learn who Panther really is rather than who so many fans apparently believed he was—some kind of caveman or maybe Ka-Zar. He’s not Ka-Zar. He is ruler of one of the most technologically advanced societies in the world. Yes, dude, he can use an iPhone.

Don McGregor: It was excitement I felt when [editor] Wil Moss first approached me about coming back to write the Panther after being away from T’Challa for decades. I loved writing him, and I spent years with T’Challa’s voice in my head, trying to “hear” not only him, but all the characters in Wakanda around him.

I actually wrote that I was of the mind not to do it up on my Facebook page. I did not want to disappoint the readers who held such love for these characters, and how much, over the years, these stories had meant to them. The worst fear the storyteller can have, I suppose, is that you come back with a short piece and the reaction is “Man, Don had it back then; he should have left it alone!” But, when I wrote about it in the social media so many people responded that they wanted me to do it, I began to re-appraise accepting while I was visiting my daughter in California.

Marvel.com: How do you feel about the character’s growing pop cultural profile, with his appearance in “Captain America: Civil War” and now his own upcoming film?

Don McGregor: I think it’s terrific! The Panther has always been an important super hero in opening up the comics medium to the different kinds of characters and stories that can be told. I spent years of my life with him, so there becomes an intimacy of daily contact with each other, of staying open to what you can do as you continue to write the next issue. You often spend more time with the title characters of your series than you do with many of the people you know. It becomes a part of you, facing the next page, the next panel, trying to get it as right as you can in the moment you are creating it.

I thought Chadwick Boseman [brought] the right combination of grace and momentum and solemnity and strength to The Black Panther that was always the way I saw him. I am so glad [Marvel staffer] Peter Charpentier made it possible for me to meet with Chadwick during the San Diego Comic-Con this last summer.

Reginald Hudlin: I remember all the Black Panther scripts that had been developed over the years. Almost all of them horrible. There were drafts where he grew up in housing projects in America with no idea of his royal heritage. Just ghastly perversions of the original concept.

So, when then-Executive Editor Axel Alonso and I sat down to talk about what was originally conceived to be a [limited series], I wanted to tell the story right. I didn’t know if there would ever be a movie, but I wanted to create a document that would tell fans who he was and be a blueprint for what a movie should be. I haven’t seen the film, but looking at how Klaw is portrayed and the inclusion of characters I created like Shuri, it looks like that is the case. 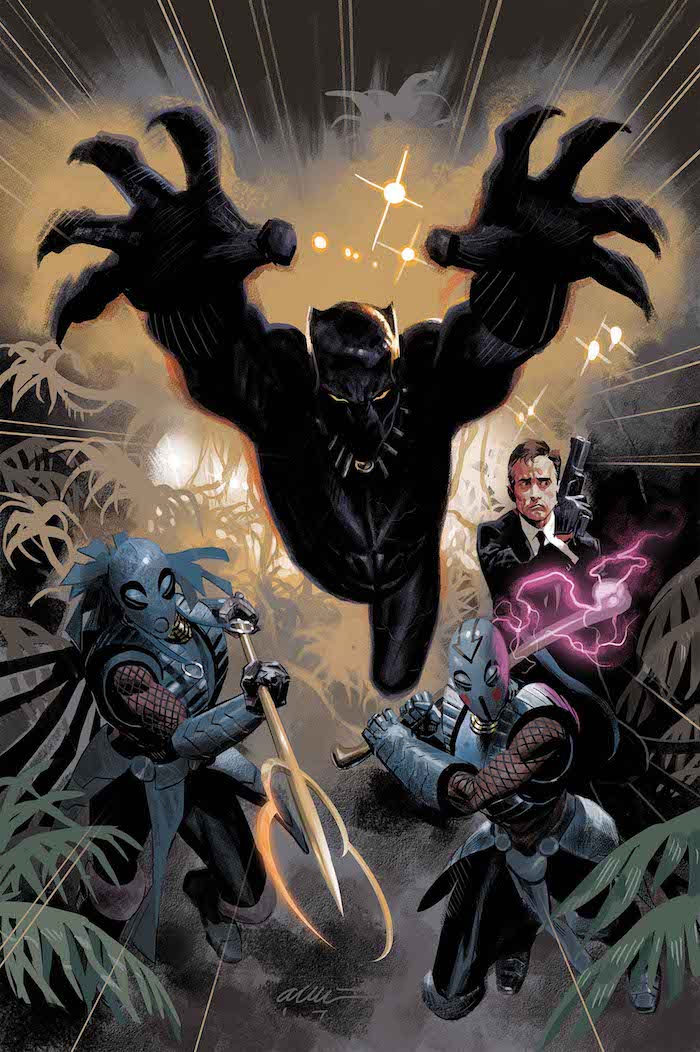 Marvel.com: Are there differences to how you approach the character now versus your original run on the book?

Don McGregor: Surely. You don’t have to do months of research to write a 12 page story as compared with a nearly 200 page graphic novel like “Panther’s Rage.” Back when I was first given the Panther to write there were multiple decisions that I had to make before I wrote one finished page. I not only read the comics; I had to research everything that would create the intricate details of Wakanda. Jack [Kirby] and Stan [Lee] had established it, but it was more a concept in those early stories, since they had a lot of characters with the Fantastic Four to interact with the Panther and whatever super villain they were fighting.

It was during those initial weeks that I discovered not one story had ever had anything to do with
Ramonda, the Panther’s mother, and I decided then that I would not mention her during “Panther’s Rage,” that this would be one big complete story, and then I would do a story dealing with South Africa and Apartheid. This would become “Panther’s Quest,” a story of a son, T’Challa, searching for his mother in an oppressive, racist regime, and how difficult such a place could make on the emotional turmoil of a son searching for a mother he has lost since childhood, a human theme I hoped everyone could relate to, and care about. As you can see, I was already concerned about where T’Challa’s life would go after “Panther’s Rage,” and before I wrote Book One of that series, I needed to know I had somewhere to go as a writer that would challenge me, but also make sure I was not writing the same story issue after issue.

Christopher Priest: Well, yes, I suppose. When I was writing the character 20 years ago, the mission was simpler: this is a story about a guy you think you know but you’ve, in fact, got him all wrong. Skip ahead 20 years, and now everybody is in on the joke. Reader expectation is different. Marvel Knights readers expected an overly serious homily on African culture, so we played against those expectations. Today’s audience already knows T’Challa is a capable—and deadly—adversary and technological genius, so I can’t write those “I can’t believe he took out Mephisto with one punch!” stories because, today’s audience knows he can.

Reginald Hudlin: Some fans on my web site asked me what story I would write if I ever came back to the character. There are a few I have in mind, but my favorite is a big epic story called World War Wakanda. It would be one of the big companywide crossovers. I only had six pages to tell my story, so I did an epilogue where you get glimpses of the result of the story  It also functions as a follow up to the “Black to The Future” story I wrote for the very first BLACK PANTHER ANNUAL.

Marvel.com: What do you think makes Black Panther such an iconic figure?

Don McGregor: I suspect many people love the idea of a character who can move with such power and grace and [certainty], and look absolutely terrific doing so! But, I have the feeling, also, for many people that they admire and want a leader who truly does want to represent as many of his people as he can, and doesn’t merely luxuriate in his power and abilities. I suspect we wish there were politicians that acted as honorably and with concern about all the people in their land.

Reginald Hudlin: He’s the African equivalent of Captain America. In the same way Cap embodies all that is good about America, The Panther symbolizes all that is great about Africa.

Christopher Priest: He’s the black guy. C’mon, let’s be honest. He’s the black guy. And he’s not angry, he doesn’t use slang or “Ebonics,” he pulls his pants up, he keeps his word. Black Panther shames us—all of us—by his nobility. He may well be the single most noble guy on Earth. Do your best. Keep your word. It’s all anyone can ask of you.