T’Challa faces off an alien invasion and Killmonger while his sister, Shuri, learns the cost of power. Is it good?

The final volume in the set, Black Panther: The Complete Collection Vol. 3 is probably the one that fans have been waiting for, as it contains two of the best stories in the mythos: “See Wakanda and Die” and the mini “Flags of Our Fathers” which co-stars Captain America. These two stories have been collected in their own volumes before, but are now largely out of print, leaving fans to search the longboxes for the single issues. No longer. 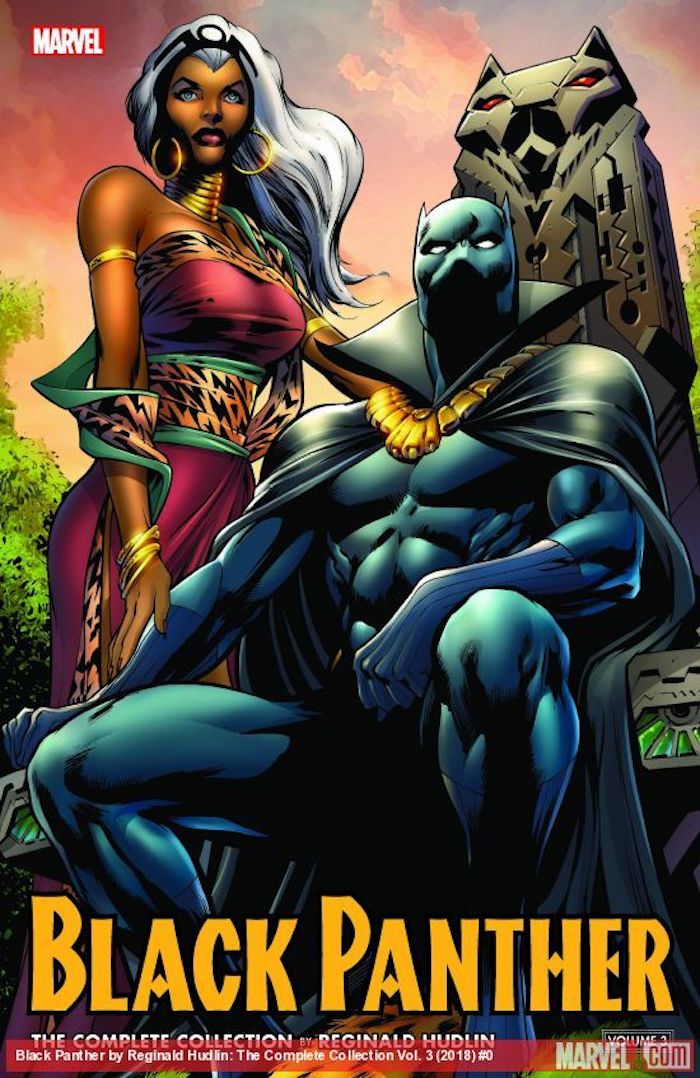 The collection opens, however, with the story, “Back to Africa,” which sees T’Challa, Shuri, and Monica Rambeau face off against Erik Killmonger. Seeing that Killmonger is the villain in the upcoming film, it’s a nice coincidence that this collection opens with this arc. While not quite a multi-part epic like Don McGregor’s “Panther’s Rage” or Priest’s Killmonger story in the first part of his run, Reginald Hudlin’s take on T’Challa’s archnemesis is still a thrilling one and it marks the first time the two have fought while both wearing armor.

The second story is undoubtedly one of the best stories in the entire Black Panther mythos: “See Wakanda and Die.” A part of the “Secret Invasion” crossover, this story can stand isolated on its own and features an action-packed sequence where T’Challa faces a Super-Skrull on his own. This story is penned by Jason Aaron, and his take on T’Challa and Storm plays to both of their strengths in battle, while giving them a worthy opponent in a Skrull general who is looking to retire after one last mission. The art by Jefte Palo and Lee Loughridge in this story is truly beautiful, with stormy greens and heavy shadows creating heavy drama for the climactic battle between the armies of the Skrulls and Wakanda.

Feeling a bit out of place is the third story in the collection, the “Deadliest of the Species” story that began the fifth publishing volume of Black Panther. While written by Reginald Hudlin, this story – which sees Shuri take on the mantle of Black Panther after her brother sustains heavy injuries – really does feel like the start of a new era and may have been a better fit with the Black Panther: Doomwar collection that was released last year.

The final story is the miniseries Captain America/Black Panther: Flags of Our Fathers. Revisiting and expanding the story of Captain America’s first encounter with Wakanda, Reginald Hudlin uses this opportunity to explore the relationship between African-Americans and Africa. While Captain America and Azzuri, T’Challa’s grandfather, take up most of the action, the heart of the story is Howling Commando Gabe Jones, who finds himself confronted with an ideal home that he has only dreamed of. Capturing his longing is artist Denys Cowan, who gives the World War II story a frenetic energy. Colorist Pete Pantazis gives the story a hallowed feel, using paler tones that make the story feel like the untold epic it is.

Black Panther: The Complete Collection Vol. 3 may be the best of the series. Talented art teams make sure that each story bursts with drama and excitement. While the “Deadliest of the Species” arc feels out of place, the collection doesn’t drag at any point. Having “See Wakanda and Die” and “Flags of Our Fathers” will make this a must buy for any Black Panther fan, especially as those out of print collections creep up in price.

Hudlin’s run ends on a high point as Black Panther: The Complete Collection Vol. 3 contains some of the best Black Panther stories out there.