Chadwick Boseman, star of films such as “42”, “Get on Up”, and “Captain America: Civil War”, recently sat for a Q&A about the meaning of superheroes at the Landmark Theater in Baltimore’s after a screening his next film, “Marshall.” 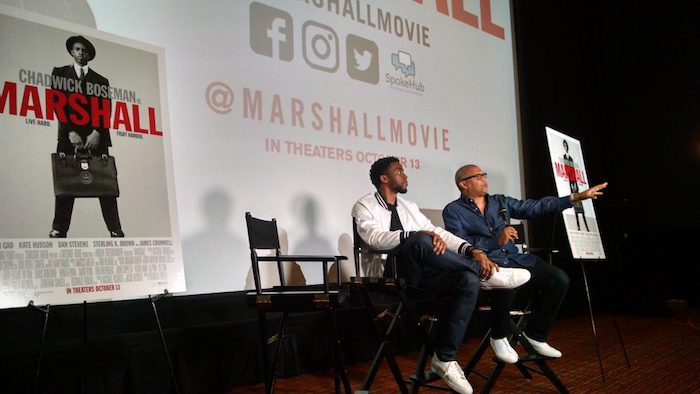 Boseman, having already portrayed Black heroes such as Jackie Robinson, and James Brown, was asked to compare his recent role as the United States’ first Black Supreme Court Justice in “Marshall” and his upcoming role of T’Chall, King of Wakanda, in “Black Panther.” Specifically, which is the greater challenge, real or fictional heroes?

“They’re both intimidating,” Boseman said. “Maybe if I play something other than Black Panther, maybe I can answer that question. Yeah, I think that both are intimidating in their own way. That’s really the only answer that I can give you.”

The conversation, which was held during the NAACP’s annual convention July 22-26, was moderated by Roland Martin, Host and Managing Editor of News One Now, and also featured “Marshall” director and producer Reginald Hudlin.

“The beauty is that we have both,” Hudlin said. “I’m involved in both. You know when I wrote the Black Panther comic book, 10 years ago, there was no chance that movie would ever get made. But, this story has to be told, because if we can’t dream it, we can’t achieve it. Our greatest heroes are almost all outlaws: Martin Luther King, Malcolm X, they all spent time in jail-fighting for good-but, for us to go to the next level, we have to imagine ourselves running our own world. That’s what Black Panther is in Wakanda. And that’s what Thurgood Marshall is.”

Hudlin, an Academy Award-winning producer for “Django Unchained” and writer and director of “House Party,” developed, produced and wrote 2010’s “Black Panther” six episode TV series and is the author of the comic book arc where T’Challa marries Storm of the X-men.

Boseman was also asked by Martin what moved him to take on the role of a “real life superhero.”

“You can’t do anything in your day-to-day life as an American without bumping into the impact of Thurgood Marshall. So, I would say, if you were gonna put another face on Mount Rushmore, he is the person that makes the nation live up to its creed.”

“We have to go from fighting the power to being the power,” Hudlin said. “This is where we are as a culture and as a people so we have to celebrate that. So, I couldn’t be more happy that these two projects are happening right now. Because, we deserve it all. We deserve to celebrate our past, celebrate our triumph and be inspired to fulfill a future that may be beyond our imagination.”