Comic Legends: Why the Watcher Showed up at Black Panther’s Wedding! 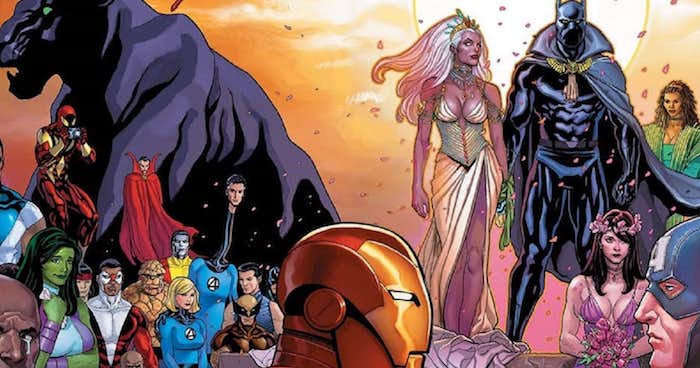 Welcome to Comic Book Legends Revealed! This is the six hundred and sixty-seventh week where we examine comic book legends and whether they are true or false.

As always, there will be three different posts for each legend this week!

The Watcher showed up at the wedding of Black Panther and Storm because of a then-upcoming Black Panther event that never came out.

A year and a half ago, I wrote a “Left Unresolved” column about the Watcher showing up at Black Panther’s wedding to Storm. Now we’ll find out how it WOULD have been resolved!

First off, let me more or less repeat what I wrote then to set things up…

In Black Panther #18 (by Reginald Hudlin, Scot Eaton and Klaus Janson), the Black Panther and Storm got married in a wedding surrounded by world leaders and their superhero friends (even those that were currently embroiled in Civil War with each other over the Superhuman Registration Act). 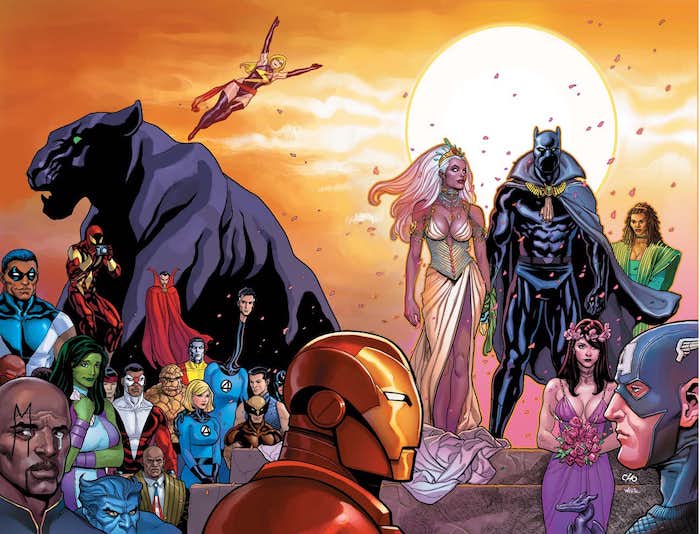 Their marriage was relatively short-lived, as T’Challa annulled their union six years later (our time) in Avengers vs. X-Men #9 (by Jason Aaron, Adam Kubert and John Dell, based on a story by a bunch of writers)… 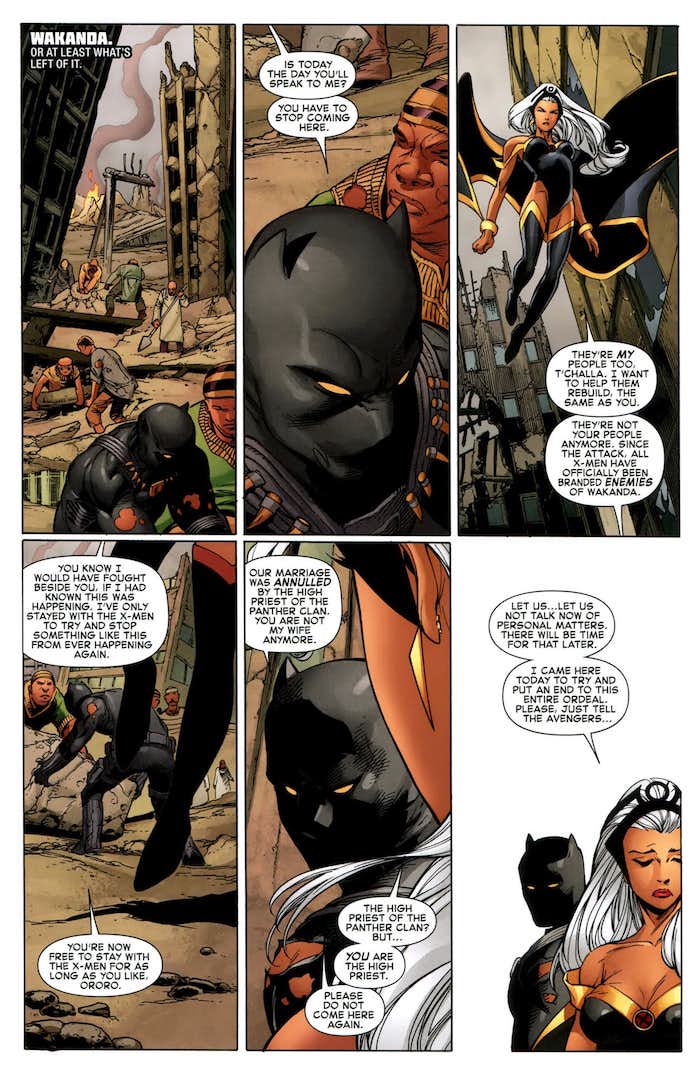 Now, up until Avengers vs. X-Men, when one of Storm’s teammates destroyed much of Wakanda, T’Challa and Storm had a happy marriage with a lot of fun adventures. I was a fan. They were especially good on the Fantastic Four (Hudlin and Dwayne McDuffie both wrote good adventures with the married couple as part of the Fantastic Four). However, whether you were a fan of the Black Panther/Storm marriage or not, I think it is fair to say that their marriage did not have a significant impact on the Marvel Universe. It was just too short.

However, when they got married, the wedding had a unique guest…the Watcher! 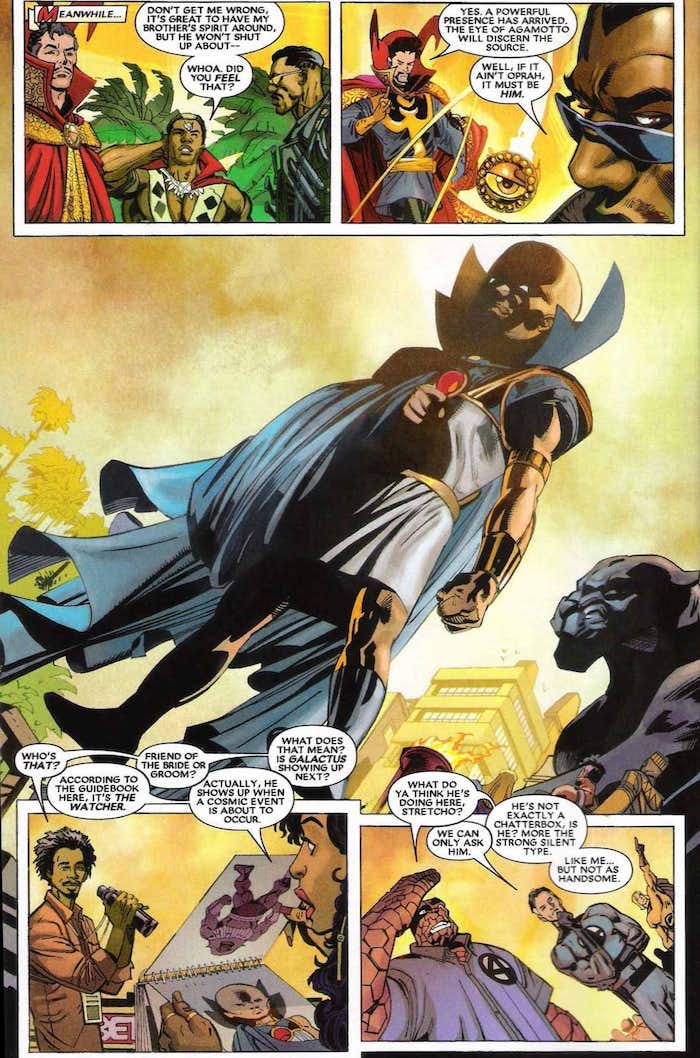 Even the Black Panther was, like, “Huh? Why’s he here?” 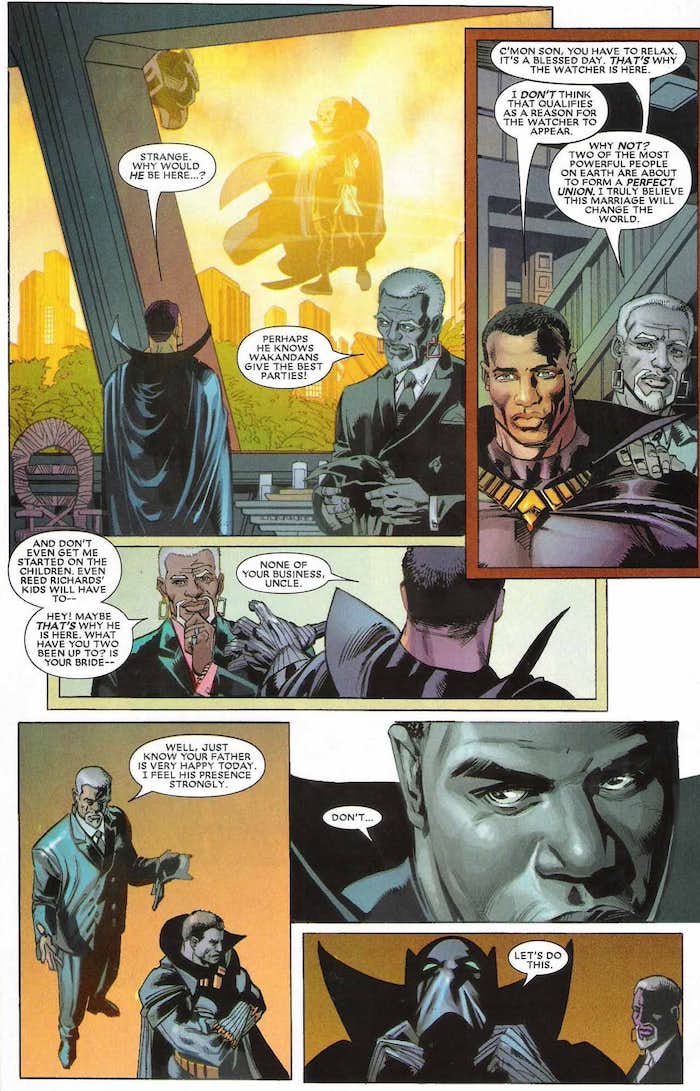 Since the marriage was annulled, the Watcher’s presence likely will never REALLY be explained in the comics. However, Victoria Johnson recently discussed the Black Panther with Reginald Hudlin at Vulture.com and Victoria got an answer to this unresolved plot point!

In Marvel comics, the Watcher usually shows up to witness major turning points in history. Is that why he was at their wedding?

The Watcher was there because this is a momentous marriage. The results of this marriage would be world-changing. There’s a story I never wrote called “World War Wakanda.” Basically, the Panther has taken this isolationist stance, like, “We’re not imperialist, we’re not trying to conquer other countries.” But the people are so paranoid, once he’s married to Storm and he starts this movement of helping mutants worldwide, ultimately he has to fight everybody. He is forced to take a more aggressive military stance on a global level.

That’s interesting. I really wish you got to write that.

[Laughs.] Well, you know, there’s a Black Panther Annual coming up soon. They asked me, Don McGregor, and Christopher Priest to each write a short story. So I wrote the epilogue of the “World War Wakanda” story in that book

Wow, that really does sound like it would have been an interesting storyline! I look forward to seeing the epilogue!
Thanks to Victoria and Reginald for the awesome information!