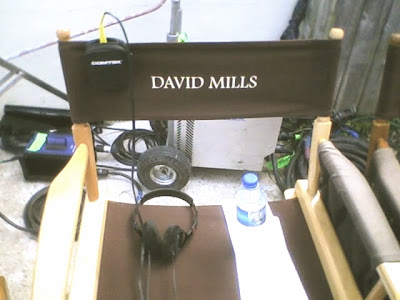 What a gigantic loss.

I met David decades ago when he was self publishing a beautifully written and designed ‘zine called UNCUT FUNK. He is the ONLY person I have ever admitted is a bigger P.FUNK fan than myself. I remember a genius video he shot that gave a tour of the Jersey neighborhood where p.funk was born. He went there for Eddie Hazel’s funeral. That was his level of commitment to some of the greatest music ever made.

When the whole PE thing blew up, I never doubted his motives….I knew he loved the group. He always had impeccable musical tastes. But he was a reporter with integrity, and that was that.

Over the years, I begged him to write a p.funk screenplay I would direct. He was never interested. But he would hit me off with great obscure p.funk covers, and an AWESOME p.funk mousepad he made himself (oh how I hate that it was taken from me that same night by some ass).

I remember when I read that "Bop Gun" script for HOMICIDE. It impressed me that it was so HIM at the same time perfectly fit the fabric of the series. That’s a quality I aspire to when I work as director on different series. His oral history of P.Funk is an essential document to understanding the group.

As great as his fiction and non-fiction writing was, this website is also one of his great achievements. Brilliantly designed, amazing breath of topics, and connected me to so many other sites and people I connect with regularly. While his list of links were not just black, the network of black intellectuals he assembled put most professional pundits to shame. I was proud when he added me to his blog list. He was a tasteful man with complete integrity and craft. Of course I wanted his approval!

I go here several times a day. Even when he “retired” it briefly. I just love it. And since the site was such a great reflection of him, I loved him.

Through this site, I found Denmark Vesey, the Black Snob, Shadow and Act and many others. I was always impressed by his willingness to debate the conspiracy minded folks at Vesey’s. He disagreed with them a lot but he debated them because he cared. Whether I disagreed with his point or not, I always respected that he could stand his ground but still listen.

His site was so tight he inspired me to step it up on my website. I never asked him what he thought about him revamped site, but I wanted him to like it. I never told him I named it my favorite site of last year, but really it’s my favorite site period. He crushed me when he almost retired from it. Now that he’s gone, I am in a daze.

If one way to judge a man is by his friendships, then David Mills was a great man. He touched amazing people.

You gave us a lot, but we needed so much more of you.

You were a true brother.