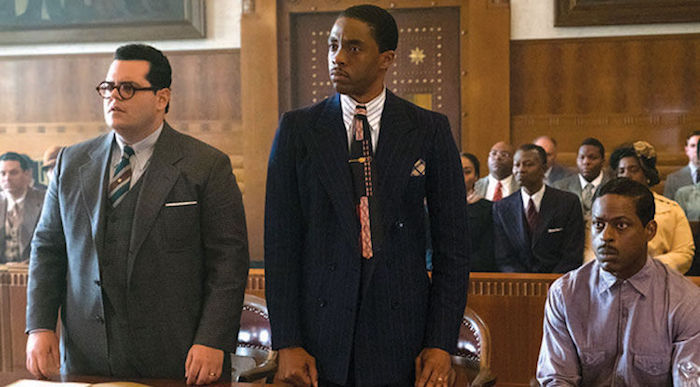 Josh Gad, Chadwick Boseman and Sterling K. Brown in a scene from the film “Marshall.”

When director, producer, filmmaker and East St. Louis native Reginald Hudlin called The American on Friday to talk about his upcoming film “Marshall,” protests were underway in downtown St. Louis. Earlier that morning, Judge Timothy Wilson handed down a not guilty verdict in the murder trial of former St. Louis Police officer Jason Stockley for the 2011 shooting death of Anthony Lamar Smith.

“I know things are bananas at home right now,” Hudlin said. “I’m hoping movies like this create a better consciousness about actions like that. When you see the specifics of how institutional racism works, I think that changes people.”

The film, which Hudlin directs, opens in theatres nationwide on October 13. “Marshall” centers around a 1941 case where a black driver is accused of raping his wealthy white employer’s wife. A young Thurgood Marshall – who was 32 at the time, but had already argued before the United States Supreme Court – was sent to Connecticut to work on the case by the NAACP. The judge would not allow him to represent the accused. Marshall is forced to team up with a Jewish lawyer with zero experience with criminal trials, and be silent in the courtroom as the case is presented.

“This was a really crucial case as far as forming his career,” Hudlin said about the story that unfolds over the course of the film. “I’ve been playing the film to audiences for the past month and people have left theatre saying, ‘I didn’t know about this part of his life – or about who he really was as a person,’ because the film captures the spirit of the type of person he was.”

Before he became the first African-American U.S. Supreme Court Judge, even before he argued the landmark Brown vs. The Board of Education case, Marshall was a gifted and hungry attorney that fought for change in a system built with the odds stacked against people of color.

Hudlin has always felt that Marshall was an underrated hero in Black History when it comes to other giants like Harriet Tubman, Dr. Martin Luther King and Malcolm X.

“He played such a crucial role in America fulfilling its promise,” Hudlin said. “Basically, you’ve got the Constitution, which has all of these great ideas, but is flawed from the beginning because of the presence of slaveholders and racism. What he did was take that and say, ‘Okay, this is the promise of the country. I’m going to take these words and make you live up to them.’”

His regard for Marshall had everything to do with Hudlin signing on to direct the film when he was approached by producer Paula Wagner.

“She called me and said, ‘I have a movie about Thurgood Marshall. I was like ‘I’m in,’ Hudlin said. “I was like, ‘I should read this first, but yes I would love to do that.’

“I teased him a little bit for being from St. Louis as opposed to East St. Louis,” Hudlin said. “We had a lot of fun. Sterling’s an amazing person. He’s so talented, so smart and so charming that you just want to be around him. I felt that from the moment I met him and it was just an absolute joy working with him – and I can’t wait to do it again.”

While it is certainly a big deal to have a director from East St. Louis and a co-star from St. Louis, Hudlin says that the region shouldn’t be surprised, because of the rich legacy in arts and entertainment.

“St. Louis and East St. Louis – the entire area has generated so many talented stars,” Hudlin said. “I grew up two doors down from where Ike met Tina. And about 10 blocks from my house was the night club where Chuck Berry created Rock and Roll. Miles Davis’ mother taught third grade at my elementary school. The truth is that we were surrounded by greatness. We have always made a tremendous contribution.”

As far as “Marshall,” Hudlin says the film’s message falls directly in line with what is happening as people protest their outrage with the Stockley verdict and attempt to hold the system accountable with their demonstrations.

“We see it right now in the streets of St. Louis,” Hudlin said. “If we stand side by side with our allies – right minded people who may not look like us, or may not start from the same place as us –if you link arms and work together, you can overcome unbelievable obstacles.”

“Marshall” opens in theaters nationwide on Friday, October 13. The film is rated PG-13 with a running time of 118 minutes.