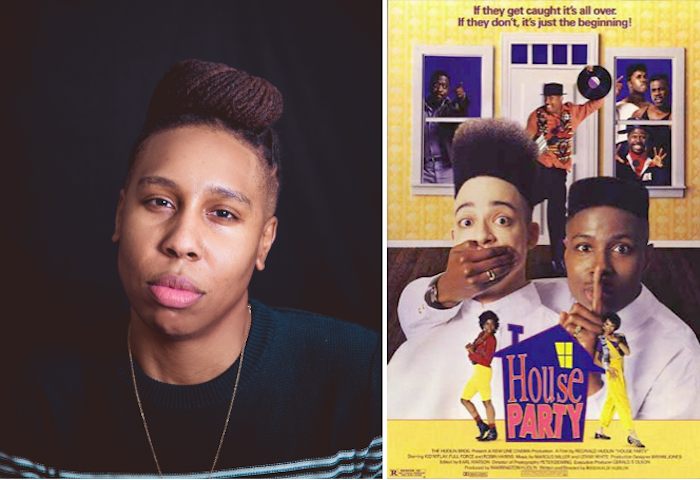 Today, we take it back to 1990: writer/producer/actress Lena Waithe (DEAR WHITE PEOPLE, MASTER OF NONE) writes about Reginald Hudlin’s indie smash, HOUSE PARTY, for #EssentialTeenFilms!

When most people talk about teen movies the first films that come to mind often come from the narrow mind of John Hughes. They immediately throw around titles like SIXTEEN CANDLES, THE BREAKFAST CLUB, or FERRIS BUELLER’S DAY OFF — but in my opinion you can’t talk about quintessential teen movies without mentioning HOUSE PARTY.

This film defined what it meant to be young, black, and fly. On the surface it’s a simple story about a kid (pun intended) who has to sneak out of his back window to attend one of the dopest house parties of the year. But underneath it’s about what it means to be a good friend. There are rules. You never go for the girl your best friend wants. You don’t hit below the belt, even in a rap battle. If three bullies threaten to kick your friend’s fucking ass — you have his back. And if one of you goes to jail, you do whatever you have to do to get the money to bail him out.

I love everything about this movie. It’s special from beginning to end. From the moment you hear Luther Vandross singing about an epic party to the very end when you hear Kid getting his ass beat by his pops — this teen movie is an unforgettable gem. Kid and Play aren’t boys in the hood — they’re two kids who live in the suburbs that want to chase girls, wear fly clothes, and have fun.

This film might sound like a light silly movie, but for me — it was like a warm hug. It was so familiar yet aspirational. It was revolutionary. And that’s why, in my opinion, it’s a classic.

We’ll finish up the first week of #EssentialTeenFilms tomorrow!