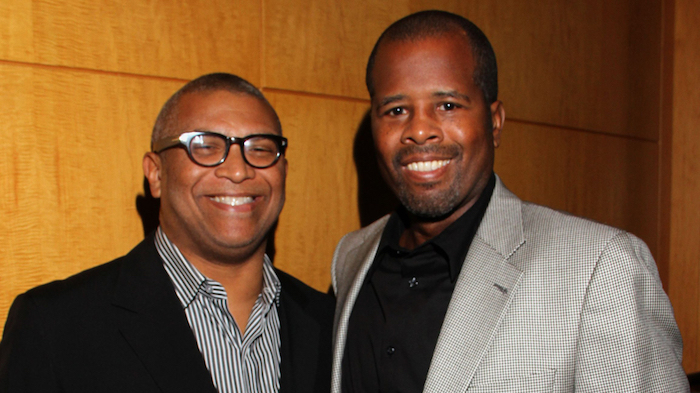 Global Road Entertainment has signed Reginald Hudlin and Byron Phillips to a a co-development deal through their company New Nation Networks. Under the agreement, Hudlin and Phillips will develop and produce original content across all platforms for Global Road.

Hudlin and Phillips have a longstanding relationship with Global Road unscripted and alternative president Phil Gurin, having produced the NAACP Image Awards with him for the last five years.

“Reggie and Byron are not only great creative thinkers, they bring a wide range of skills, interests and relationships to tap into for content creation,” Gurin said. “Through this relationship we hope to identify comedy, reality, factual, live events and documentary projects with a unique voice and a global appeal. Plus, they are great guys and I have loved working with them over the years as we have together produced the annual NAACP Image Awards telecast. I am excited to see what they come up with!”

A writer, director, and producer, Hudlin’s credits include “The Bondocks,” “The Bernie Mac Show,” Fox’s “Showtime at the Apollo” specials, and Marvel’s “Black Panther” animated series, as well as the films “Django Unhcained” and “Marshall.” He also produced the 88th Academy Awards hosted by Chris Rock in 2016.

“It’s been a pleasure working with Phil for the past five years on the NAACP Image Awards,” Hudlin said. “Expanding our working relationship is a natural extension of our relationship and his position at Global Road.”

Phillips is a former executive vice president of entertainment for the BET Networks, where he oversaw content creation. He and Hudlin are co-founders of film, TV and digital content company New Nation Networks.

“Working with Phil the last few years has been an absolute joy,” Phillips said. “He has a brilliant creative mind and the ability to bring a vision to fruition. Phil is a natural leader and someone I plan to work with for years to come.”