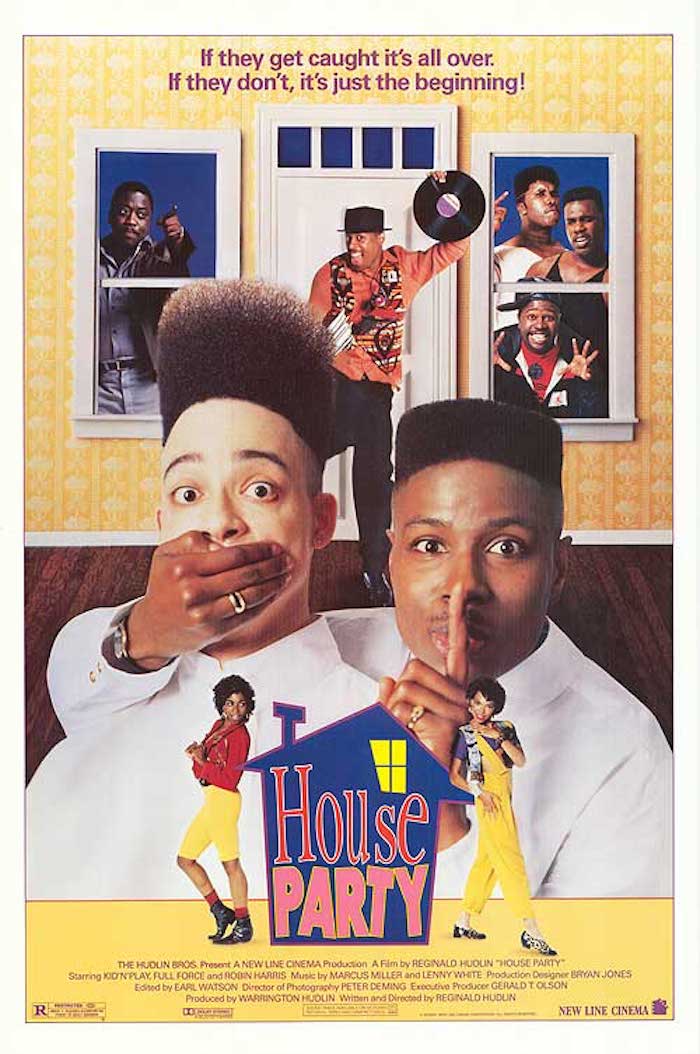 I missed the boat on House Party back in 1990. I’m not really sure why…I’m going to chalk it up to I just wasn’t the biggest Kid ‘n Play fan. I seem to remember them playing some club local here in Trenton and something happened. Maybe violence (as per usual) or they cancelled and then there was violence (as per usual). While I was familiar with Kid n’ Play I didn’t listen to their music. Around this time it was probably De La Soul and Ice-T. Still loved Run-DMC. DJ Jazzy Jeff and the Fresh Prince (which I’ll swing back to in a second). But not Kid ‘n Play. House Party actually didn’t play at many theaters around the country and I can’t be sure if and when it even played here. I caught House Party on home video and instantly loved it. I saw House Party 2 in theaters and pretty much loved it too. I would have seen House Party 3 in theaters but I was away at Basic Training so I had to wait until later to see the flick.

House Party was written, produced, and directed by the most excellent Reginald Hudlin. I’ve been in awe of the man for quite a number of years…we got to chat quite a number of years ago when I worked for Newsarama and I was doing an article on him. I got to profess my love for House Party (AND Boomerang. AND The Great White Hype) and it was really cool speaking to the man. But that was like…13 years ago. Man I’m living in the past, aren’t I? 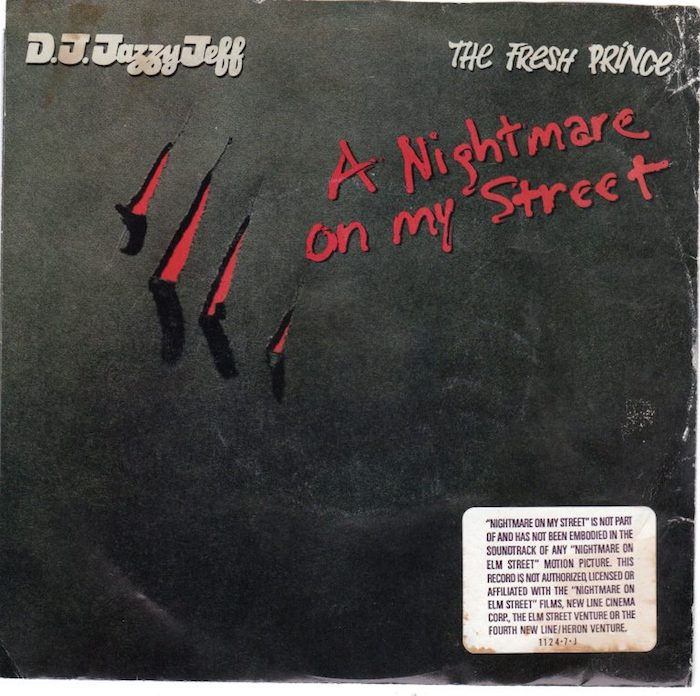 Back to House Party.  For years it was rumored that the film was supposed to star DJ Jazzy Jeff and the Fresh Prince.  I know there are direct quotes out there somewhere but I searched Google for two seconds and came up with basically nothing.  Basically the story comes down to Will Smith and Jeff did the song A Nightmare on My Street from their MONSTER second album He’s The DJ, I’m the Rapper (dude I broke that cassette.  I may have listened to Parents Just Don’t Understand 6,000 times).  I believe New Line Cinema was pissed off about the song for some reason and warning stickers had to be put on the single’s release saying it had nothing to do with the soundtrack for Nightmare on Elm Street 4.  But it also put the duo on New Line’s radar.  They were offered House Party but turned it down.  History has seen that was a bit foolish…though the duo would find success with Will’s Fresh Prince of Bel Air (and obviously Will would find massive box office success).  By the by if you don’t cop Jeff Townes Summertime Mix each year you are truly missing out. 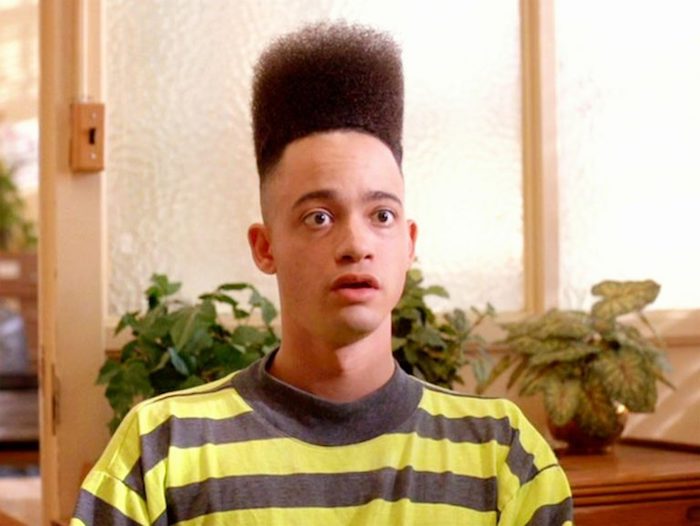 The plot of House Party is pretty simple.  Play’s parents are away and he’s throwing a party.  Kid wants to go to said party but ends up getting in trouble after a run in with Full Force (Paul Anthony, Bowlegged Lou, and B-Fine).  The school sends a slip home which ends up reaching Kid’s Pop (Robin Harris).  Kid goes on punishment…no party…no girlies…nothing.  Luckily Pops falls asleep watching Dolemite so Kid sneaks out the house. 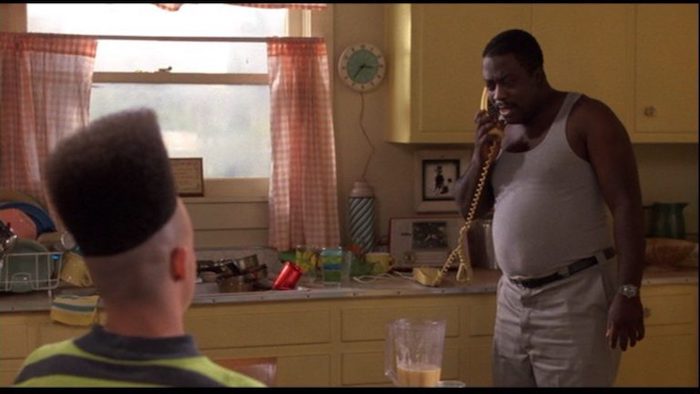 The thing is he has a hard time getting to the party.  He doesn’t have a car so he has to huff it.  But he’s not so lucky as he keeps trying to duck Full Force (who are out to kick his ass) while avoiding the slightly racist cops.  Eventually Kid makes it to the party…which really is the best part of the movie. 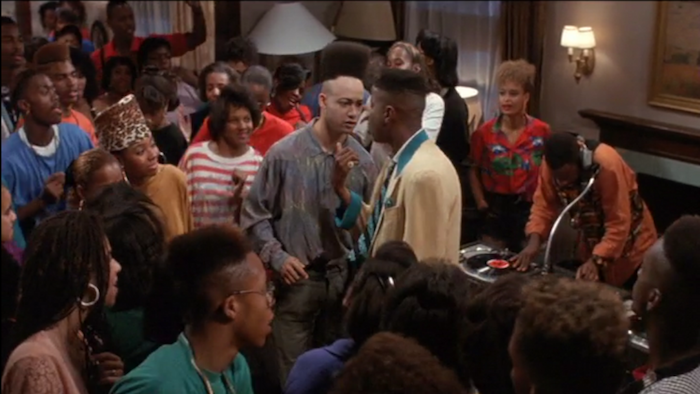 There’s so many great things about this party.  The biggest thing is it actually feels like a high school party.  Packed to the max with people, people dancing, the host trying to not get his parents shit broke.  Not every party I went to had a DJ (at most it was just a radio playing music) but Kid and Play are also best friends with Bilal (Martin Lawrence) who is the DJ extraordinaire. 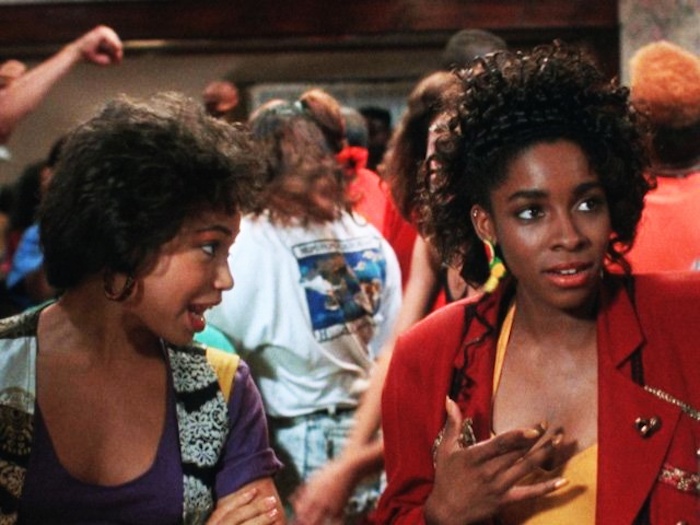 There’s two best friends in Sidney (Tisha Campbell) and Sharane (A.J. Johnson) who kinda both like Kid.  They fuck with him a bunch and try to play it off to each other that they don’t really like him.  But it become evident that they both kinda do like him.  Causes a bit of tension – and it is really well done. 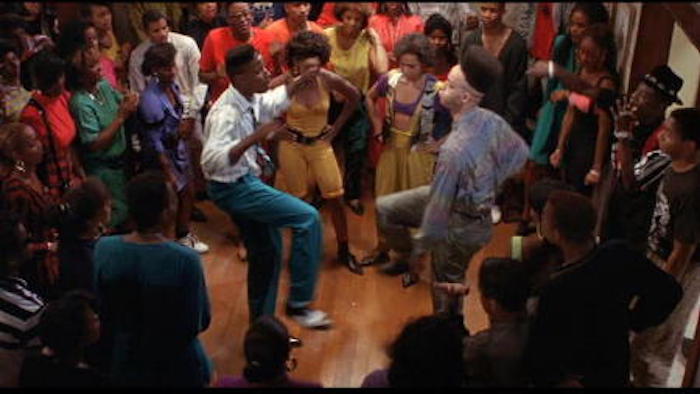 Probably the best known part of the movie is when Sidney and Sharane have a “dance battle” against Kid and Play.  Kid and Play get to show off their well known dancing skills including the move that is dubbed “The Funky Charleston.”  I’ll give it to them…it is a pretty great dance and it is no wonder they are so well known for it. 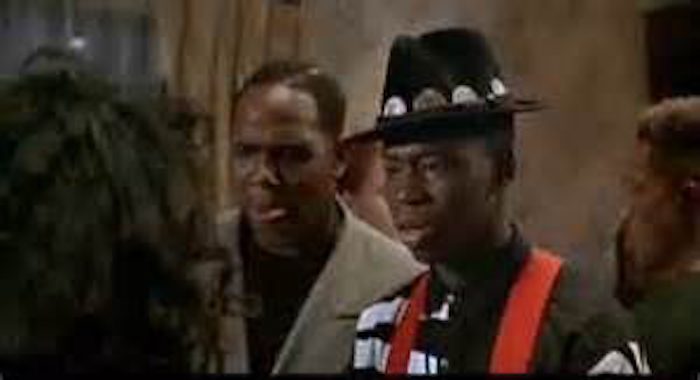 Rappers Groove and Chill (from the rap duo Groove B Chill) are in the flick as well.  Groove hits the liquor pretty hard and actually starts out the dance battle with Kid before his drunk ass falls out and Play takes his place.  Chill keeps hitting the DJ table and causing the track to skip – pissing off Bilal.  It’s pretty damn funny.  While you never really saw Groove again and the duo never released another album after their 1990 debut, Daryl “Chill” Mitchell has had a pretty damn long acting career.  I love him from Sgt. Bilko and Galaxy Quest…plus his time on NBC’s show Ed.  The man is now stuck in a wheelchair after a motorcycle accident and he is still out there getting acting gigs.  I’m glad to see life didn’t keep him down. 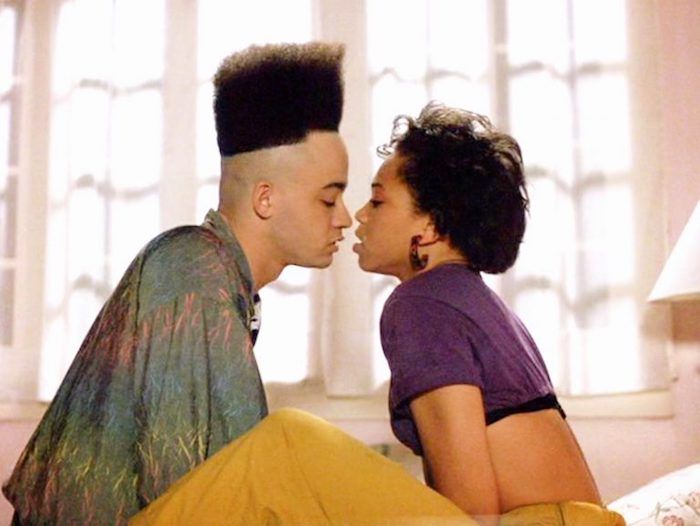 So Full Force show up to kick Kid’s ass but finally with some boys at his back they are driven away.  Kid tries to kick it with Sharane and when that doesn’t work he tries to kick it with Sidney.  That actually DOES work and the dude almost get some (if it wasn’t for his old ass jimmy-hat he just might have).  After barely escaping Sidney’s parents Kid gets locked up against Full Force and then literally locked up in jail.  This is also a quite humorous part as Kid tries his damnedest to rap his way out of getting ass raped in jail. 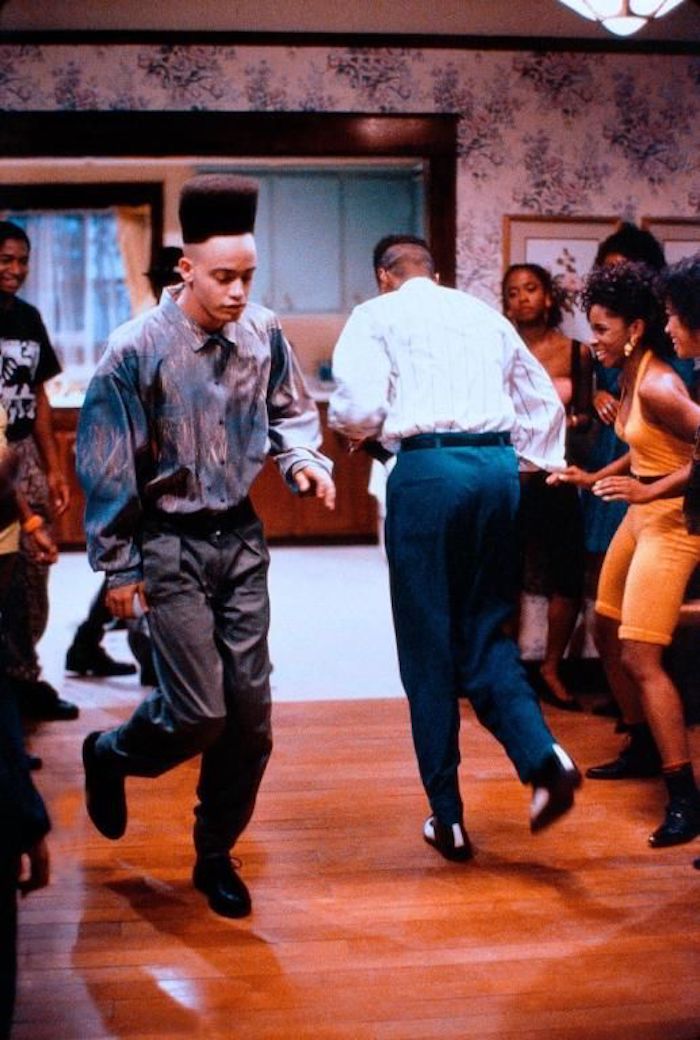 There’s so many great things about this movie.  Absolutely #1 is both Kid and Play.  They are amazing on screen.  If you look back at the films of this time you come up with Krush Groove, Wild Style, Disorderlies, and Tougher Than Leather…all decent films but you learn quickly that, other than Run from Run-DMC, they really aren’t actors.  Kid ‘n Play might be rappers but they are quite amazing actors.  They sell the hell out of themselves on the big screen and they are damn fun to watch.  They would release an album at the same time House Party came out (perfect timing) and see a big hit with their song Funhouse.  They would star in 2 more House Party movies, another film Class Act, a kids cartoon, and a Marvel comic book. 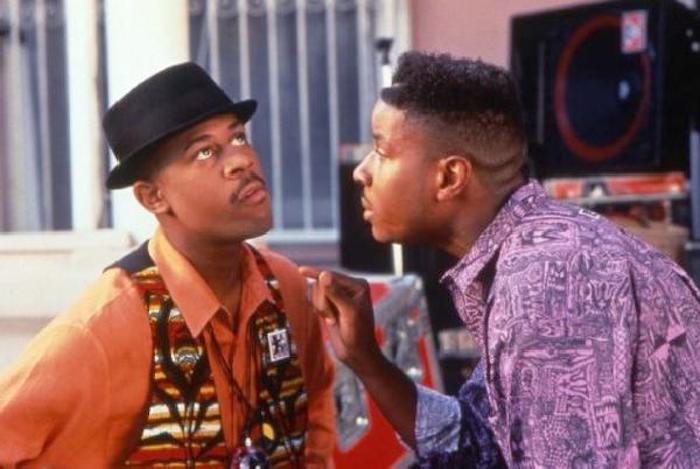 It didn’t take long for Martin Lawrence to break out huge.  He would reteam with Kid and Play for House Party 2 and reteam with Hudlin for Boomerang.  His show Martin would be a MASSIVE success for him (where he would team up with House Party’s Tisha Campbell…though things didn’t end well for that duo) and Bad Boys would launch Martin (and Will Smith) to the stratosphere. 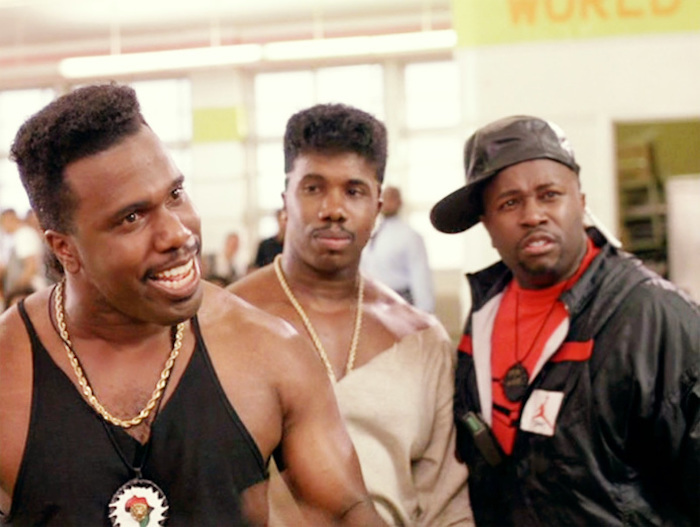 I always find it funny to see Full Force in these movies.  It was about six years prior that Paul Anthony and B-Fine were playing toughs in Krush Groove and suddenly they were back playing HIGH SCHOOL STUDENTS.  Dudes were like forty.  Bowlegged Lou was always my favorite of the three as he has a bit of humor to him…but I enjoyed his performance in Who’s the Man just a bit more. 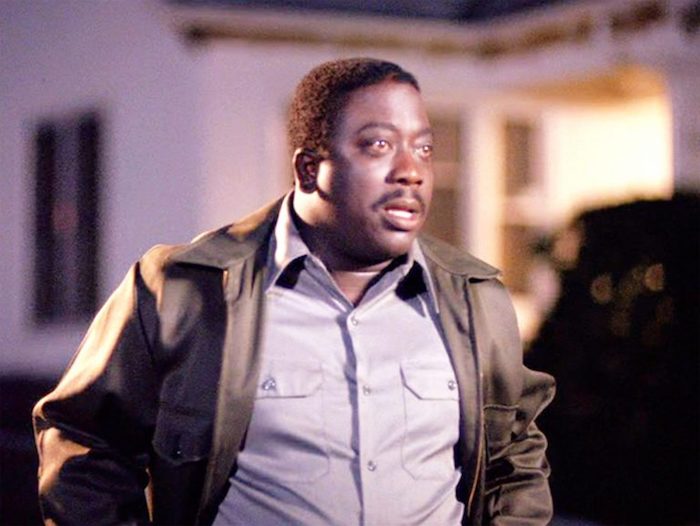 Robin Harris. Man…Robin Harris. Dude was funny. I watched a shit ton of HBO back in these days and there was NOTHING funnier than Robin Harris’ comedy act. Listening to him talk about Bebe’s Kids was just the funniest shit. He didn’t get to do too many movies – he’s probably most well known for House Party and Do the Right Thing…though I always find it funny he pops up as the bartender in I’m Gonna Git You Sucka. He died way too young. Dude was 36 when he died. 36 YEARS OLD. I am older than Robin Harris was when he did House Party and that shit blows my mind. I find his legacy a bit tarnished by the horrible Bebe’s Kids cartoon movie they did…but if Robin Harris is remembered for anything these days it is probably that damn cartoon (Jamika was a honey though). Watch some Robert Townsend Partners in Crime and tell me Harris isn’t the funniest man EVER.

While the sequels certainly didn’t reach anywhere near the level of the first House Party – this film is still one classic cult film. It’s funny that out of all the films in hip hop history this film series is the one that became a franchise (with three theatrical films and two direct-to-DVD films). There are a ton more hip hop movies to review and I think I will tackle the entire House Party series. Part 4 didn’t feature Kid or Play at all (the film starred IMX aka Immature who appeared in the third film) and while part 5 did feature cameos from Kid and Play the film did not revolve around them again. I’ve never seen the last two films so I guess I’ll be looking forward to tackling them for the first time. But next on the plate will be the pajama jammy-jam.