Yes, any kid can wear a Black Panther costume, say creators who helped shape the character 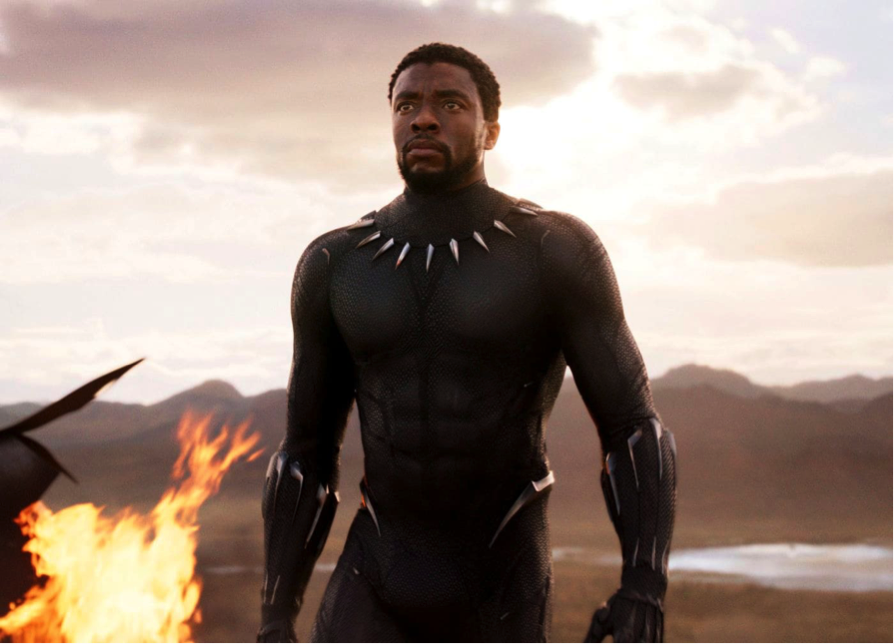 SINCE FEBRUARY, when Disney/Marvel’s smash “Black Panther” first captured not only audience attention but also the cultural zeitgeist, reporters have been asking the question: Which kids are permitted to don the superhero costume from the fictional African nation of Wakanda?

Or as Joshua David Stein wondered in a column at the time for Fatherly: “Should I allow my white son to dress as a black superhero?”

Jen Juneau wrote on People.com this month: “Parents of white children may want to think twice before purchasing a Black Panther Halloween costume this year.” And Steph Montgomery, writing this month for the online publication Romper, said: “I don’t think it’s appropriate for my white children to dress up as main characters T’Challa and Shuri, or the members of Dora Milaje — the badass women special forces of Wakanda.

“Because we’re a white family I know that ‘Black Panther’ does not exist for us,” she wrote. “Instead, I believe it exists for black kids who deserve to have heroes who look like them; something white people have long enjoyed and have taken for granted.”

As superhero diversity has increased in recent years, films such as “Black Panther” — not unlike such recent animated movies as “Coco” and “Moana” — can start conversations about issues of cultural appropriation, and who is allowed to dress as a certain character. Megyn Kelly’s comments defending the wearing of blackface on Halloween further stoked debate about how race is represented in costumes. But in interviews with The Washington Post, several creators who have helped shape the Black Panther character, along with other prominent authors who have written characters of color, are adamant: Any kid can dress as Black Panther.

“The idea that only black kids would wear Black Panther costumes is insane to me,” said Reg Hudlin, the Oscar-nominated filmmaker who has worked on Wakanda-set projects for both the page and screen, including the animated TV miniseries “Black Panther.” “Why would anyone say that?”

The top two films of the year, “Avengers: Infinity War” and “Black Panther” ($3.4 billion combined globally), both spotlight Wakanda — and Hudlin celebrates the omnipresence of its shiny-as-Vibranium costumes.

“I love that all kids want to be Black Panther or Shuri or the Dora Milaje,” Hudlin said of the royal-court characters, including T’Challa’s teen-genius sister Princess Shuri, created during Hudlin’s run on the comic. “These are the small steps that make the world a better place.” 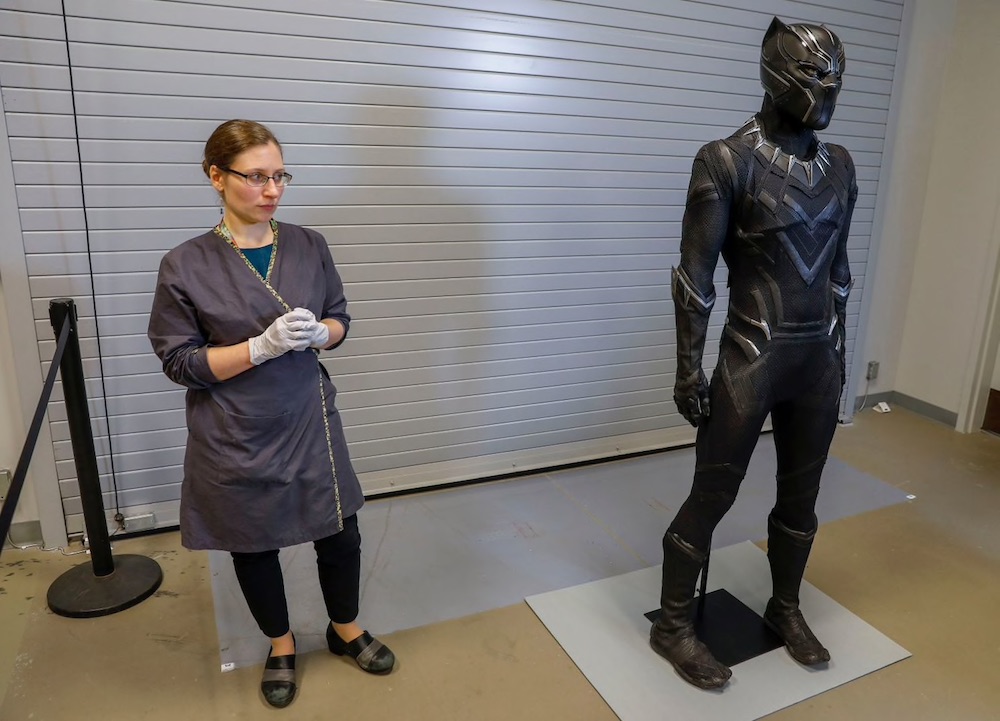 Photo by ERIK S LESSER/EPA-EFE/REX Textile conservator Emma Schmitt keeps close watch over the recently acquired Black Panther costume at the Smithsonian National Museum of African American History and Culture in Washington. The suit, worn by Chadwick Boseman in the 2018 film, is made of flexible 3-D printed materials and was donated to the museum by Marvel Studios and the Walt Disney Company.

When Hudlin was writing Black Panther comics, in fact, “one of the things I loved,” he recalled, was the diversity of its fandom.

“Every type of person showed up for a book signing: black, white, Asian, Latino — men and women, young and old,” he said. “It feels good to write something culturally specific that plugs into a universally relatable experience.”

She says the point in creating such Afrofuturistic art is to build not barriers but, rather, cultural bridges — and so fans should embrace that the world of Black Panther is “taking its royal place in the vast Comic-Con and cosplayer universe.”

So why are people posing this question over T’Challa now, Carter says rhetorically.

“The only reason we’re asking that question now is because the Black Panther is a black man. And I think that’s what’s wrong with people — that’s what’s wrong with parents,” Carter said. “Because I see kids far and wide embracing the concept of a superhero. I believe they see him as someone who is majestic and powerful and doing good, and has a kingdom and a legacy and is pretty cool. I don’t think they see a black guy — I think they see the image of a superhero,” she added, and “it happens to be the Black Panther just as it happens to be Superman.”

Carter said it is the grown-ups who create an issue where children have none.
Parents, she said, “get so hung up on the wrong thing that kids aren’t even focused on — but they make the kids focus on it.”

And given the popularity of the Black Panther — a character created by Stan Lee and Jack Kirby in the 1960s — Marvel Comics “grabbed a whole [black] demographic that was not really represented and brought them in, and just opened the door to everyone. It didn’t mean that now it’s a segregated world — it means that it’s an inclusionary one,” said Carter, reflecting the film’s theme of whether Wakanda should stay isolated or connect with the rest of the globe.

“If we don’t embrace other cultures and let other ethnicities embrace ours,” Carter said, “then we’re hypocrites.” 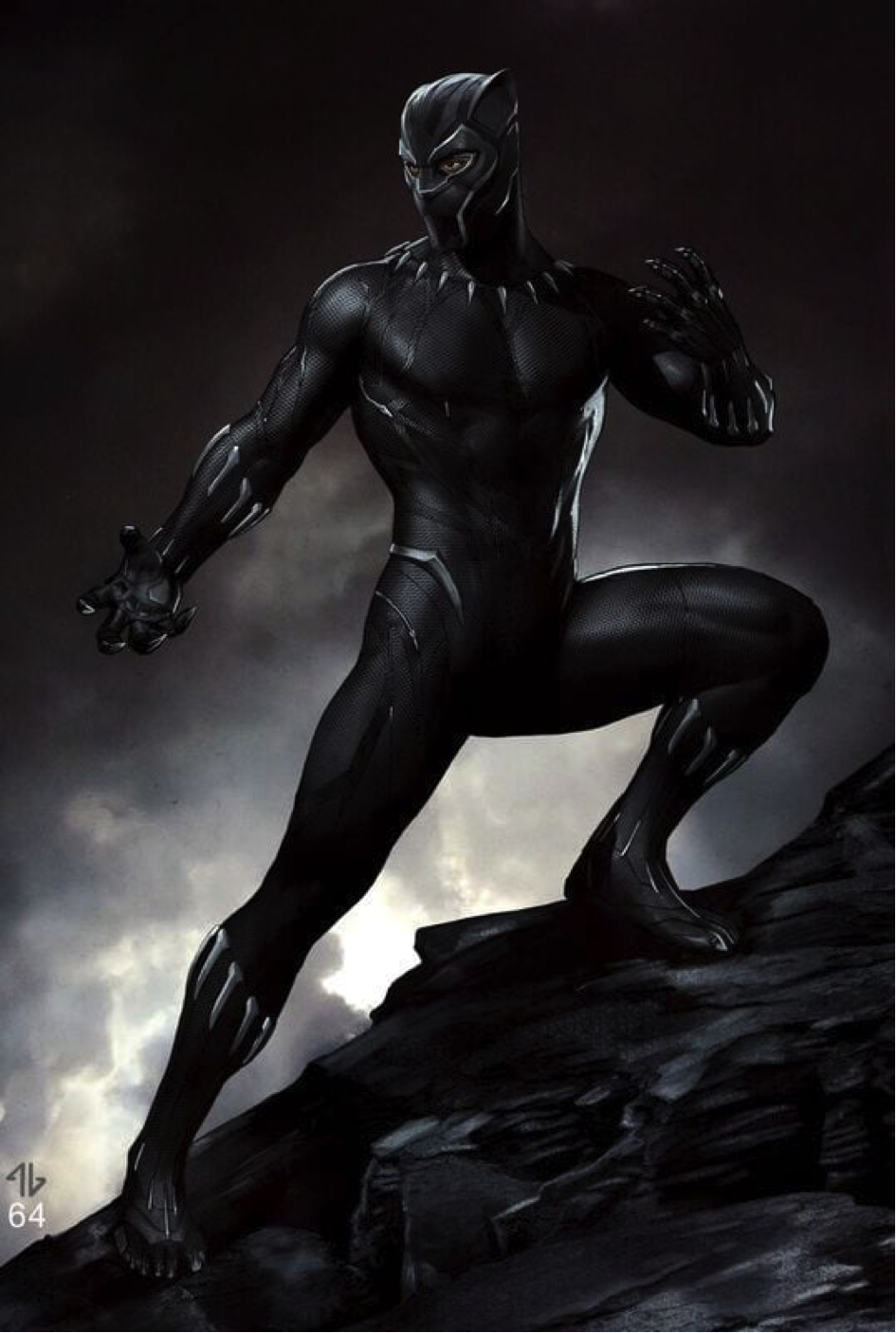 Shawn Martinbrough, a Washington-based illustrator (“Thief of Thieves”) who worked on the comic-book story arc “Black Panther: The Man Without Fear,” appreciates the creative interplay between the Kirby and Lee costumes of the ‘60s comics and Carter’s cinematic masterpieces — and believes that young cosplayers should feel free to wear any era’s look.

“I’m happy that kids across the spectrum feel so connected to the characters of Wakanda,” he said. “The more comfortable people are experiencing and embracing the beauty in other cultures makes them less likely to indulge in stereotypes.”

Gene Luen Yang, a Bay Area-based graphic novelist (“American Born Chinese,” “Boxers and Saints”) and past national ambassador for Young People’s Literature, loves to write about issues of identity — including through his recent co-creation of the DC Comics character Kong Kenan, a.k.a. the “Superman of China.” And he draws a distinction about costuming based on the intention of the wearer.

“It seems to me that when little kids dress up as fictional heroes for Halloween, they almost always do it from a place of admiration,” said Yang. His children “admire Superman or Black Panther or Rey from ‘Star Wars,’ so they want to try on their clothes for a day. Maybe deep down, they hope their heroes’ courage will bleed into them.

“Admiration obviously crosses lines of culture and gender — my kids admire plenty of people who do not look or live like them — so I think the same should be true for their Halloween costumes.”

When it comes to adults, however, sometimes “Halloween can be cover for certain individuals to express contempt for certain people and groups, all in the name of fun and irony,” said Yang, underscoring how the anonymity of a costume can provide cover for baser instincts.

“That said, I do believe in giving people the benefit of the doubt. I do not believe in policing the Halloween costumes of adults,” Yang said. “But I also believe in honest, blunt discussion when folks might have crossed the line.”

Keith Knight, creator of the strips “The K Chronicles” and “Knight Life,” appreciates a great costume, having been a Michael Jackson impersonator in his teen years. He said of the Black Panther issue, “Was that ever a question when dressing up as Batman or Superman? It’s a costume!”

“And, please, stop with the blackface,” he added. “You can dress as a black character without donning dark makeup.”

Lalo Alcaraz, the “La Cucaracha” comic-strip creator who was a cultural adviser on Disney/Pixar’s Oscar-winning “Coco,” believes that when it comes to costuming, the “Coco” characters now “belong to the world’s pop culture.”

“The success of ‘Coco,’ besides authenticity, was the universality of the film’s characters,” Alcaraz said. “Of course anybody can dress as the movie’s characters.”

“If my kids wanted to dress up as Wakandans, I would be so happy,” he said. “Of course, they would never consider darkening their skin to portray these African-inspired comic-book and movie characters.

“If they did, I would go send them to live with Megyn Kelly as punishment.”