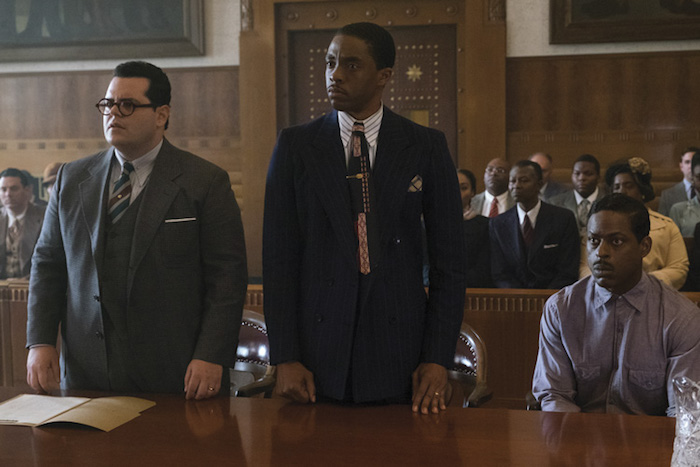 I don’t think my wife likes to watch “lawyer movies” with me at the theater. I don’t blame her opposition, actually. She has to hear about the practice of law every day of her life. Why would she want to think about jury trials under the guise of “entertainment”?

To be fair, she’d go without question if I asked. She’d have a quick look on her face—the one I see for a split-second when she’s a little frustrated—but it would pass, and she’d agree. I’ve learned over time to save those slightly frustrated looks for the other movies I enjoy. Like the ones based on comic books.

Consequently, I didn’t go watch Marshall when it was first released on the big screen. I waited to rent it online. It’s worth a rent.

The film begins in Hugo, Oklahoma. As a born-and-bred Oklahoman, the scene immediately caught my attention. I’ve heard of the Billy Lyons case. To be honest, though, I’d never read too much into it. Up until this film, I had no idea Thurgood Marshall handled the trial.

The film serves as an origin story of sorts for the future Justice Marshall. Marshall is a one-man legal army for the NAACP. He travels across the country trying cases for the accused. As the opening minutes unfold, he is sent to Connecticut to defend a black man accused of raping a white woman.

Once Marshall meets his new client, he begins their relationship by peppering him with questions. He wants to know if his client raped the complaining victim. He starts to interrogate him. He dispenses with pleasantries and icebreakers. He informs his new client that the NAACP will “only represent innocent people.” The client, Joseph Spell, informs Marshall that he is, in fact, innocent.

In that regard, there are two types of criminal defense trial attorneys: Those who want to know whether their clients are guilty, and those who don’t. I fall on the side of those who’d rather not know.

The sad reality of the profession is that 80 to 90 percent of my clients are lying to me about one thing or another 80 to 90 percent of the time. That’s a rough estimation. Maybe it’s a little cynical, but ultimately, it’s true. For whatever reason, even within the security of confidentiality, criminal clients aren’t typically totally truthful.

Can I ask my clients if they committed the crime? Of course. But I usually don’t. They will either tell me they did, or they’ll tell me they didn’t. There will always be an issue of culpability, and someone accused of a crime will usually voice their opinion about the accusation.

Marshall’s NAACP couldn’t represent guilty people, but I can. I’m bound by the facts, and that’s good enough for me. The guilty need attorneys too, and their attorneys need to be zealous advocates, free from bias and emotion.

Now, I can tell when clients are lying—most of the time. I’m no human lie detector, though. With that in mind, I feel like I perform my best when I take a universal approach to each and every case: It doesn’t matter whether the client is innocent; all that matters is whether the prosecution can prove to a jury beyond a reasonable doubt that the defendant is guilty. That’s why fair jurors are so important. 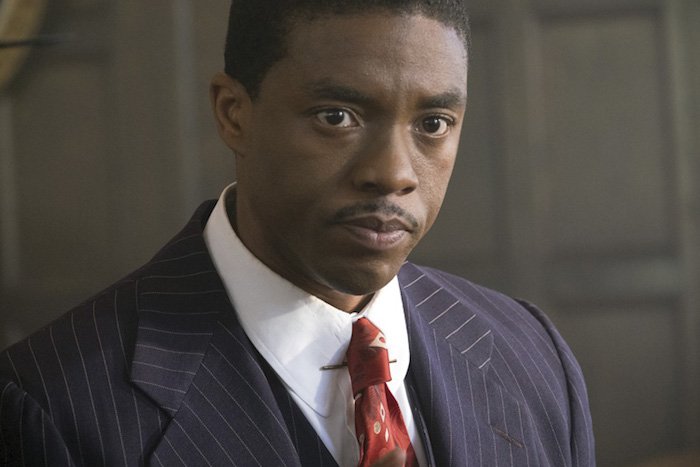 But it’s not just clients who will lie to you, though. Jurors will lie as well. Transparency isn’t easy to come by. It’s not most people’s default setting.

In the film, Thurgood Marshall and his co-counsel go through a voir dire sequence. All of the individuals they speak with are remarkably candid. In a time fraught with racism and ignorance, these potential jurors have no qualms. They don’t worry about potential backlash or criticism when they explain and justify their insecurities and hatred.

Today though, one can’t vomit the same hate-speech allowed in the 1940s and get away with it. Even among those with racist tendencies, most have societal restrictions and restraints that keep them from airing their actual thoughts and feelings on race, religion, and other perceived division lines. It makes it increasingly difficult for the attorneys tasked with weeding out the bad apples.

The fact that bigotry is not as widely accepted as it was in the past does not mean it ceases to exist. There are still plenty of potential jurors, in every prospect pool, with deep-seeded demons. Some are wicked enough to actively hide them just to get on a jury.

It’s hard to uproot those prejudices through public questioning, but you have to try. At the end of the day, the goal is to get individuals who will agree to the burden and follow the law. People interpret those issues through different prisms, though, based on their feelings about the defendant’s specific characteristics. You have to understand how people view your client.

Mr. Marshall’s client, Joseph Spell, is far from a perfect man. He was dishonorably discharged from the army. He was fired from his last job for stealing. He left behind his wife and two kids in Louisiana. “But none of that makes him guilty.”

Many of the defendants we defend have baggage. If no criminal ever committed another crime, there’d be a lot more room in prison and a lot less attorneys at the courthouse. But the reality of criminal law is that individuals often face the system more than once.

Sometimes, the baggage they carry isn’t even a prior conviction. Sometimes it’s just a “prior bad act” the prosecution offers to show motive, opportunity, intent, preparation, plan, knowledge, identity, absence of mistake, or lack of accident.

How do you handle the potential impeachment and negative character evidence? According to Marshall, “the jury needs to hear him deny it. And you bring out all the bad stuff yourself.”

I agree with this for the most part. I generally believe the jury wants to hear someone say: “I didn’t do it.” For me, that’s not a hard-and-fast rule, though. There are plenty of situations where I wouldn’t put a client on the stand unless he or she demanded it. Sometimes the potential benefit is outweighed by the potential detriment.

Others live and die by the mantra that the “client must speak.” Early in my career I had a boss who wanted every defendant to take the stand. He firmly believed that it was next to necessary that the accused testify under oath. Yet, sometimes it’s better for the defendant not to speak. Maybe there’s a ton of baggage. Maybe the prosecution’s case is so weak there’s no need for the defendant to testify.

The movie is spot-on though: if your client is going to testify, take the air out of the prosecution.

In the film, the prosecution makes various plea offers throughout the trial. This is one of the most difficult aspects of criminal defense trial practice. I’ve had prosecutors make new plea offers during trial. This is almost always an indication things aren’t going quite the way they planned.

Maybe a witness didn’t come off as well as expected. Maybe skillful cross-examination exposed a problem the prosecution can’t patch. There will be times during trial when a deal too good to pass up gets placed on your platter. What do you do?

The easy (and sometimes smart) option is to urge your client to take the definite deal as opposed to risking an unknown verdict. There is nothing more difficult than a client questioning whether he or she should take a sweetheart plea offer during trial.

It’s tough to tell someone they shouldn’t take a misdemeanor conviction and probation when he or she is staring down the barrel of a felony that carries decades in prison. A definite resolution is a beautiful thing. There is security in knowing the outcome. Waiting out twelve strangers is a lonely experience.

But to fight for an entire trial just to settle? That is a tough pill to swallow. Usually, by that time, the hard work is over with. Still, it’s the client’s decision to accept or decline a plea offer. Nevertheless, they will usually ask for your opinion.

Again, the movie is pretty spot on: Don’t admit to it if you didn’t do it.

Overall, Marshall was a pretty solid viewing experience. It had some nice comedic undertones, the “legalese” wasn’t underdone or overblown, and I kept thinking Black Pantherwas going to burst on to the screen and take out some of the racist townsfolk. Apparently Chadwick Boseman is a great actor, regardless of what kind of suit he is wearing.