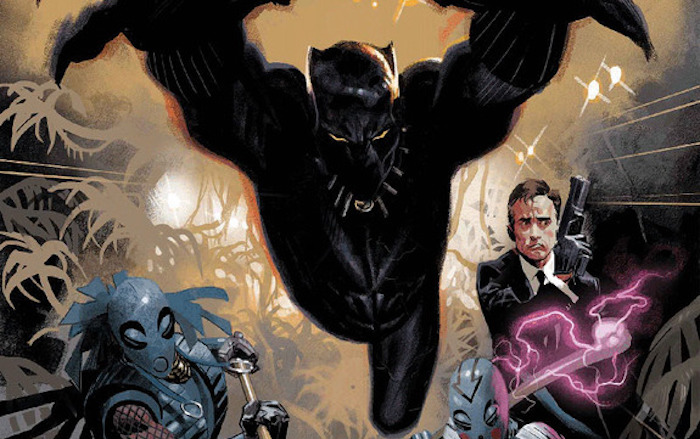 Four of Black Panther’s most iconic creators are reuniting with the character for a new Black Panther Annual #1 coming out this February. Don McGregor, Christopher Priest, Reggie Hudlin, and Ken Lashley are working on stories for the anthology – along with Daniel Acuna and several more artists to be named later.

“I had wanted to do this opening sequence for years, but hadn’t determined how to pull it off,” McGregor told Newsarama of his new story. “But I figured out a way to do it, and do something that focuses emotionally on T’Challa and the people around him – some of them being characters readers liked back when I was writing Black Panther regularly. This turned into what I’m calling ‘Panther’s Heart,’ with Wakanda’s heart-shaped herb being one of the meanings for the title of the story. But for the story itself, I go into more detail about the heart-shaped herbs and how they’re used.”

Here is the solicitation for that issue – and look for Marvel’s full February 2018 solicits later this month at Newsarama.

BLACK PANTHER ANNUAL #1
DON McGREGOR, CHRISTOPHER PRIEST & REGGIE HUDLIN (W)
DANIEL ACUNA, KEN LASHLEY & MORE (A)
Cover by DANIEL ACUNA
Variant Cover by BRIAN STELFREEZE
LEGENDARY PANTHER WRITERS RETURN!
Three legendary BLACK PANTHER writers return to Wakanda! Don McGregor’s famous storyline “The Panther’s Rage” has become one of the most well-respected runs in comic book history. Now, the author who redefined Wakanda for a generation is back to expand the mythos! Bearing the heart-shaped herb that defines the Panther legacy, King T’Challa leaves his beloved country for a heart-wrenching mission in the streets of New York. Then: For half a decade, comics legend Christopher Priest made his mark on the Panther. The acclaimed writer returns with an all-new story – and with it, of course, U.S. State Department employee Everett K. Ross! And finally, no Panther history would be complete without Reggie Hudlin, author of more than 50 Black Panther stories, including the famed “Who Is The Black Panther?” Don’t miss the sequel to his “Black to the Future” story, featuring original artist Ken Lashley!