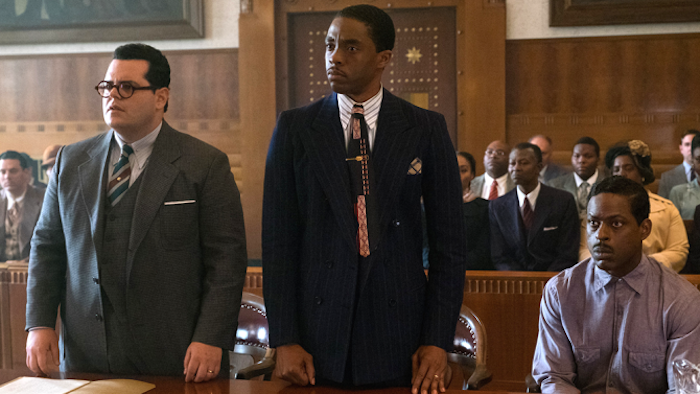 Having already played Jackie Robinson and James Brown, Chadwick Boseman is taking on another real-life icon in a courtroom thriller about Thurgood Marshall.

Under the direction of Reginald Hudlin, Boseman stars as the legendary attorney in “Marshall,” a film that focuses on a case early in the career of the Supreme Court justice.

Via the press announcement: “As the nation teeters on the brink of WWII, a nearly bankrupt NAACP sends Marshall to conservative Connecticut to defend a black chauffeur against his wealthy socialite employer in a sexual assault and attempted murder trial that quickly became tabloid fodder. In need of a high profile victory but muzzled by a segregationist court, Marshall is partnered with Samuel Friedman, a young Jewish lawyer who has never tried a case. Marshall and Friedman struggle against a hostile storm of fear and prejudice, driven to discover the truth in the sensationalized trial which helped set the groundwork for the Civil Rights Movement to come.”

Joining Boseman in front of the camera are Sterling K. Brown as Joseph Spell, the defendant at the center of the above case; Keesha Sharp plays Buster Marshall, Thurgood’s wife; and Josh Gad is Samuel Friedman, the young Jewish lawyer who partners with Marshall on the case.

Kate Hudson, Dan Stevens and James Cromwell round out the starring cast.

Paula Wagner is producing through her Chestnut Ridge Productions banner along with Jonathan Sanger and Hudlin.

Open Road has set an October 13 release date for “Marshall,” it was announced today – just in time for awards season.

“I can’t wait for the world to see this movie,” Hudlin said. “It’s a thriller, not a biopic, about an early case of one of the greatest lawyers in American history. In a time when we need heroes who fight for justice, ‘Marshall’ is an inspirational movie that brings people together.”

The film is being produced with the full cooperation of the Thurgood Marshall and Samuel Friedman estates.