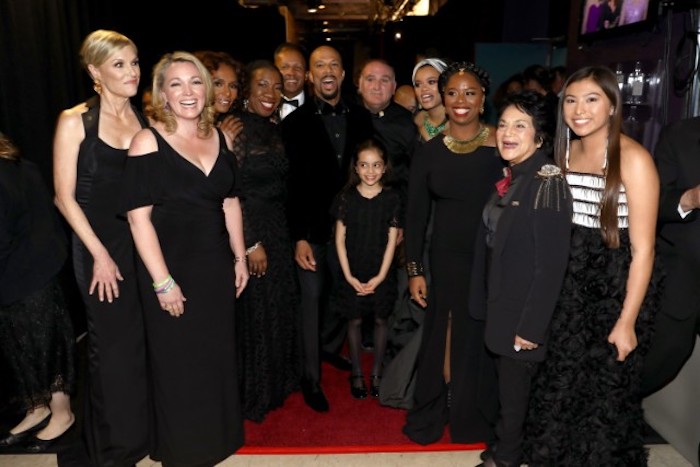 Much like many nominees and winners at the annual Academy Awards, rapper Common and singer Andra Day used the live televised broadcast as an opportunity to shed light on important issues through a song performances. At the 2018 Oscars, the duo did just that and spotlighted 10 unsung heroes and activists of today who have made a difference in society and beyond.

Andra and Common shared their thoughts on their decision to celebrate those in the trenches of activism and politics, fighting to make a difference in the lives of others.

“I am truly honored to share the stage with such powerful people. People who work, sacrifice and have fought through their personal pain to make the world a better place,” shared Andra in a statement. “Everyone’s contribution is important, but Common and I wanted to show people who are working everyday in the trenches to transform perceptions, circumstances, legislation, social and political landscapes, and bring hope to the hopeless.”

Much Love to all the heroes that joined Andra Day + I on stage. pic.twitter.com/k9RIVNhMe5

Common pointed out how many of the activists who stood on stage with them took action because of “their own personal experiences” and because of the injustices they saw “going on in the world.”

“We wanted to take our gratitude and connect it to a movement that is bigger than us,” shared the Chicago native.  “We started thinking of ways we could highlight activists and acknowledge those who are on the frontline and on the ground every day doing the work to change the world.”

“If it’s one thing I learned from being a part of Selma it is that an activist is someone who lives their life for what they believe in and works for that cause every day.  The activists we asked to join us on stage are people who have dedicated their lives to making the world better,” the actor continued.

To keep the focus on the honored and “unsung heroes,” here is a list of who they are as well as what they stand for. Scroll down and get familiar.

Mini Bio: Alice Otter, 14, has been a powerful voice of the Standing Rock youth spearheading the #NoDAPL movement. In the summer of 2016, at age 12, she ran 1,519 miles from Standing Rock Sioux Reservation in North Dakota to the front steps of the Army Corp of Engineers office in Washington, D.C., to protest the construction of the Dakota Access Pipeline. Alice strives to remain a positive role model for Native youth through several youth organizations like Woihanble (Dream) and the Standing Rock Youth Council. She is dedicated to keeping the Lakota language and culture alive by living Lakota values and teachings.

Alice Brown Otter has been a powerful voice of the Standing Rock youth spearheading the #NoDAPL movement. #StandUpForSomething https://t.co/BbPW7f5Xob pic.twitter.com/ZPLvgfbqs7

Mini Bio: Bana Alabed, 8, is a Syrian refugee from Aleppo, known worldwide for her tweets during the siege of the city in 2016 and for her subsequent calls for peace and an end to all global conflict. Her tweets have earned her legions of admirers around the world by giving a remarkable insight into the daily horrors of life in the city, including airstrikes, hunger, and the prospect of her family’s death. Her book, DEAR WORLD: A Syrian Girl’s Story of War and Plea for Peace (released October 2017) is not just a gripping account of a family endangered by war—it also offers a uniquely intimate, child’s-eye perspective on one of the biggest humanitarian crises in history. J.K. Rowling aptly describes it as “a story of love and courage amid brutality and terror.”

.@AlabedBana is a Syrian refugee from Aleppo, known worldwide for her tweets during the siege of the city in 2016 and for her subsequent calls for peace and an end to all global conflict. #StandUpForSomething https://t.co/BbPW7f5Xob pic.twitter.com/DFYmpu2n6o

Mini Bio: Bryan Stevenson, 58, is the director of the Equal Justice Initiative and the author of Just Mercy. Mr. Stevenson and EJI have won relief for scores of people who were wrongly convicted or unfairly sentenced. EJI is committed to ending mass incarceration and excessive punishment in the United States, to challenging racial and economic injustice, and to protecting basic human rights for the most vulnerable people in American society. On April 26, 2018 EJI will open the National Memorial for Peace and Justice and The Legacy Museum: From Enslavement to Mass Incarceration.

.@eji_org is the director of the Equal Justice Initiative and the author of Just Mercy. Mr. Stevenson and EJI have won relief for scores of people who were wrongly convicted or unfairly sentenced. #StandUpForSomething https://t.co/BbPW7f5Xob pic.twitter.com/cuyPOswtua

Mini Bio: Cecile Richards, 60, has been a lifelong activist for women’s rights and social justice, including more than a decade as president of Planned Parenthood Federation of America and Planned Parenthood Action Fund. She is standing up for the right of every woman – regardless of race, income, sexual orientation, or immigration status – to get the health care she needs, including reproductive health care; access affordable childcare and paid family leave; earn a living wage; live and work without facing harassment or abuse; raise families in safe communities with excellent public schools; make her voice heard in the voting booth; and more.

.@CecileRichards has been a lifelong activist for women’s rights and social justice, including more than a decade as president of Planned Parenthood Federation of America and Planned Parenthood Action Fund. #StandUpForSomething https://t.co/BbPW7f5Xob pic.twitter.com/P8tTO0wLGK

Mini Bio: Dolores Huerta, 87, is the president and founder of the Dolores Huerta Foundation (DHF) since 2003 and co-founded the United Farm Workers of America with Cesar Chavez in 1962. DHF is connecting groundbreaking community-based organizing to state and national movements to register and educate voters; advocate for education reform; bring about infrastructure improvements in low-income communities; advocate for greater equality for the LGBT community; and create strong leadership development. She has received numerous awards: among them The Eleanor Roosevelt Humans Rights Award in l998 and The Presidential Medal of Freedom in 2012. DOLORES, the acclaimed documentary about the life and work of Dolores Huerta, premieres on INDEPENDENT LENS on PBS March 27th.

Mini Bio: Janet Mock is the NY Times bestselling author of two memoirs, Redefining Realness and Surpassing Certainty, which broke ground by centering her journey as a young trans woman. Mock spoke at the Women’s March on Washington and founded #GirlsLikeUs, a project that empowers trans women. Mock has been named one of Variety’s “Power of Women,” included on Ebony’s Power 100 List, honored at the 2017 Literary Awards by the PEN Center USA, and called one of “12 new faces of black leadership” in TIME, and is currently making TV history as the first trans woman of color to write & produce for television with Ryan Murphy’s FX series Pose.

Mini Bio: José Andrés, 48, is named one of Time’s “100 Most Influential People”, “Outstanding Chef” and “Humanitarian of the Year” by the James Beard Foundation. He is an internationally-recognized culinary innovator, author, educator, television personality, humanitarian and chef/owner of ThinkFoodGroup. As a naturalized citizen, originally from Spain, he’s been a tireless advocate for immigration reform as well. Together with World Central Kitchen and #ChefsforPuertoRico, Andrés served over 3.3 million meals in Puerto Rico following the devastation of Hurricane Maria in 2017, reaching communities in need across all 78 municipalities through 23 kitchens. Andrés’ work has earned numerous awards including the 2015 National Humanities Medal, one of 12 distinguished recipients of the award from the National Endowment for the Humanities.

Mini Bio: Nicole Hockley, mother of Dylan Hockley who was tragically killed in the Sandy Hook Shooting, is the Founder and Managing Director for Sandy Hook Promise (SHP)- the national non-profit organization founded and led by several family members who lost loved ones at Sandy Hook Elementary School in 2012. Hockley has worked to enable social change and promote gun violence prevention. She has lead SHP to educate and train over 3 million youths, teens, and adults in all 50 states through the organization’s four proven “Know the Signs” programs. Hockley was named one of PEOPLE’s 25 Women Changing the World by PEOPLE Magazine in 2016, received The Common Good American Spirit Award for Citizen Activism in 2013 and most recently nominated for the 2018 People’s Choice Award for Change Makers, by the Child Mind Institute.

Mini Bio: Tarana Burke, 45, is an American civil rights activist who works at the intersection of racial justice and sexual violence. Fueled by commitments to interrupt sexual violence and other systemic inequalities disproportionately impacting marginalized people, particularly black women and girls, Burke has created and led various campaigns focused on increasing access to resources and support for impacted communities. She is the founder of the “Me Too” movement, which raises awareness of sexual violence, predominantly young women of color from low wealth communities, find pathways to healing.

.@TaranaBurke is an American civil rights activist who works at the intersection of racial justice and sexual violence. She is the founder of the #MeToo movement. #StandUpForSomething https://t.co/BbPW7f5Xob pic.twitter.com/5QTW92sYVI

Watch all the activists in Andra Day and Common’s Oscars performance of “Stand Up For Something” from Marshall here.