‘Marshall’ depicts a fight for truth, justice and the American way 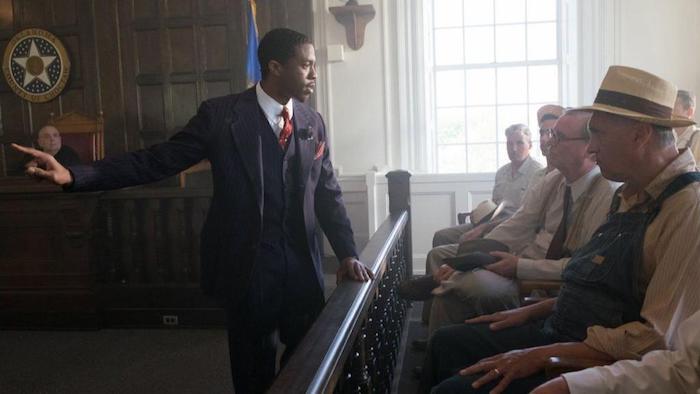 Forget Luke Cage, Black Panther and Nick Fury. The real black superhero carries a briefcase filled with law books and a copy of the U.S. Constitution in his jacket pocket.

His name is Thurgood Marshall.

The strong-willed civil rights activist and Supreme Court justice is nothing if not heroic in the October release “Marshall.” With Chadwick Boseman in the title role, director Reginald Hudlin’s movie is the true story of an early case in Marshall’s career when, as the founder and only lawyer working for the NAACP Legal Defense Fund, he defended a black chauffeur (played by Sterling K. Brown) accused of raping his white employer (Kate Hudson). 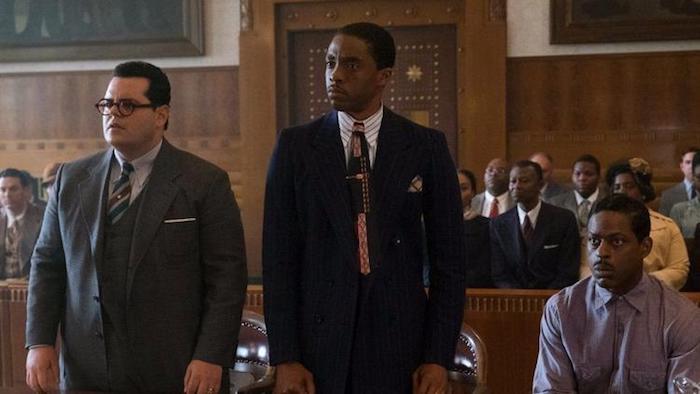 Marshall “was fighting insurmountable odds” at the time, says Boseman, “dealing with limitations of space and time” as he bounced around the country taking on racially charged cases that were dangerous and seemed unwinnable. “The idea he could walk into those spaces in Alabama, Mississippi, Tennessee, go up against crowds of people who don’t want him to be there and try cases — and walk in with audacity — you could say that’s super.”

Connecticut in 1941, where the legal action in “Marshall” takes place, was not the Deep South, but racism was still pervasive. The judge in the case (James Cromwell) refused to let Marshall speak in court, so he had to seek out white counsel to do his talking. The only person who would help him, reluctantly, was a young Jewish insurance defense lawyer named Sam Friedman (played by Josh Gad), who had no background in criminal law. This meant Marshall had to school him in the intricacies of trial procedure, and it also means that the film not only shows how Marshall trained lawyers to follow in his footsteps, but highlights the often close relationship between blacks and Jews in the early days of the civil rights struggle.

“The modern civil rights movement began not as a movement of large groups of people, but one man traveling around bringing lawsuits,” says Michael Koskoff, a Connecticut attorney who wrote the “Marshall” screenplay with his son Jacob. “Marshall believed they needed an army of lawyers, and if lawyers were not trained, the black community would not get their rights. Before there was a movement of civil disobedience, there was a movement harnessing the power of the law.”

Boseman notes that when it comes to the black-Jewish relationship, “there is a kinship in terms of oppression. The Jews know what it’s like to not be a part of the larger society. Even in this film there’s an inner circle in Bridgeport that Josh Gad’s character cannot get into, and that’s part of the story. Also in this film, it’s 1941, prior to the U.S. entering World War II, and that war was a clear case where white supremacy was a part of the war, and Josh Gad has to decide what he is going to do in terms of white supremacy at home.”

At the end of the film, Marshall is called away from Connecticut and sent to Mississippi to litigate yet another troubling case. He’s like a legal Superman, fighting for “truth, justice and the American way” — yet it’s not the America that is, but the one he wants it to be.

Or as Boseman puts it: “He made America live up to its dream, that all men are created equal. How do you do that? You challenge the laws. You are not accepting them; you are making them.”