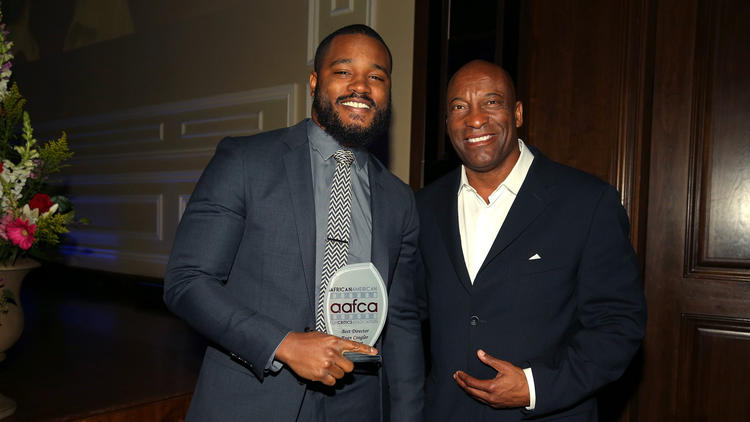 “I am an endangered species, but I sing no victim’s song. I am a woman. I am an artist and I know where my voice belongs.”

These words, borrowed from jazz singer Dianne Reeves’ “Endangered Species,” rang out in Hollywood’s Taglyan Complex on Wednesday night as actress Sheryl Lee Ralph belted them from the stage. Quite fittingly, they embody the purpose of the African American Film Critics Assn. which, for the seventh year, hosted an awards dinner to honor its selection of the year’s best films and television shows. And with a broader conversation about diversity unfolding in the entertainment industry, the organization’s importance was placed front and center.

“For all of us here who are filmmakers, creators, [we know that] black product is always devalued,” said Reginald Hudlin, producer of this year’s Oscars ceremony. “It’s always seen as a piece of business, not a piece of art. So the importance of [black] film critics, of us being able to critique and respect our own work is really crucial.”

Hosted by Terrence J and Nischelle Turner, the night attracted some of the most influential names in black Hollywood. What seems like a reincarnation of the Black Oscars, the gathering honored a diverse lot of 10 films the association believed to be the best of the last year. Those films included “Straight Outta Compton,” which took home the top prize; “Creed” and “Beasts of No Nation” along with “The Danish Girl,” “Carol” and “The Martian.” Shows including “Survivor’s Remorse,” “black-ish” and “How to Get Away with Murder” were also recognized. “Creed’s” Ryan Coogler was named best director.

Individual honors were presented to Hudlin, famed director John Singleton and Jeff Clanagan of Codeblack Films. Clanagan’s words, while accepting the Ashley Boone award for his work in marketing and distribution, received much applause for its direct approach to addressing ways black Hollywood can respond to the broader industry’s lack of diversity. “We should be doing for ourselves versus always chasing the studios when they’re saying no,” he said. “Don’t take no for an answer. Our culture transcends and travels worldwide.”

Clanagan suggested content creators make use of the Internet and social media as platforms to get their productions out to the world.

“This notion [that] our movies don’t travel overseas is [expletive],” he said. “There are audiences over there and they want to see us, [so much so that] they get it on bootleg.”

As for what studios can do, HBO Films’ president Len Amato had an idea during his acceptance speech for the Cinema Vanguard Award.

“Diverse initiatives and programming are no longer altruistic endeavors,” he said. “The country is changing and the industry must change with it. It makes good business sense.”

Terrence J perhaps summed up the evening the best, which can be applied to why awards shows that celebrate people of color and their cultural productions are important.

“Someone wanted me to say something about the Oscars…,” he began. “It’s on Feb. 28. Please watch the show. It’s going to be fantastic.”