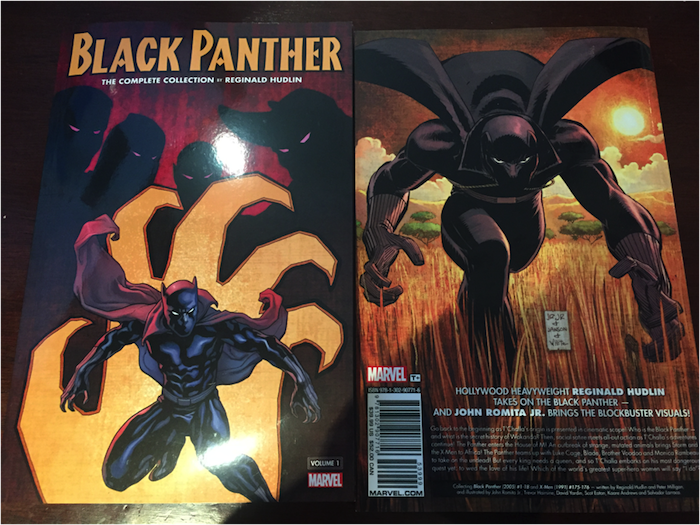 While Christopher Priest’s run on Black Panther is often touted as the definitive run on the character, Reginald Hudlin’s take is equally important due to the prominence he brought to Black Panther. Of course, prominence doesn’t always translate to quality, and this run hasn’t always been held in high regard. The question remains: is it good?

Black Panther by Reginald Hudlin: The Complete Collection Vol. 1 opens with the “Who is the Black Panther?” arc that serves as a fantastic introduction to the character and the mythos. The arc was initially part of the Marvel Knights banner and outside of the regular continuity before being retroactively folded in, and so while there are some basic changes (eg, Everett K. Ross no longer serves as an ally to T’Challa, T’Chaka’s death at the hands of Klaw is reworked from the original story by Jack Kirby and Stan Lee), this opening arc gets at the heart of Hudlin’s take on the character. The story is quickly paced, and draws on a number of characters from Marvel’s pantheon (something that remains true for the rest of the book) and shows just why the Black Panther is cool.

John Romita Jr.’s artwork is fantastic, providing stunning visuals of both ancient and modern Wakanda and some awesome fight sequences (including a two page spread covering Captain America’s WWII encounter with Wakanda). His T’Challa is handsome and intellectual, creating a visually interesting lead for the reader to follow. 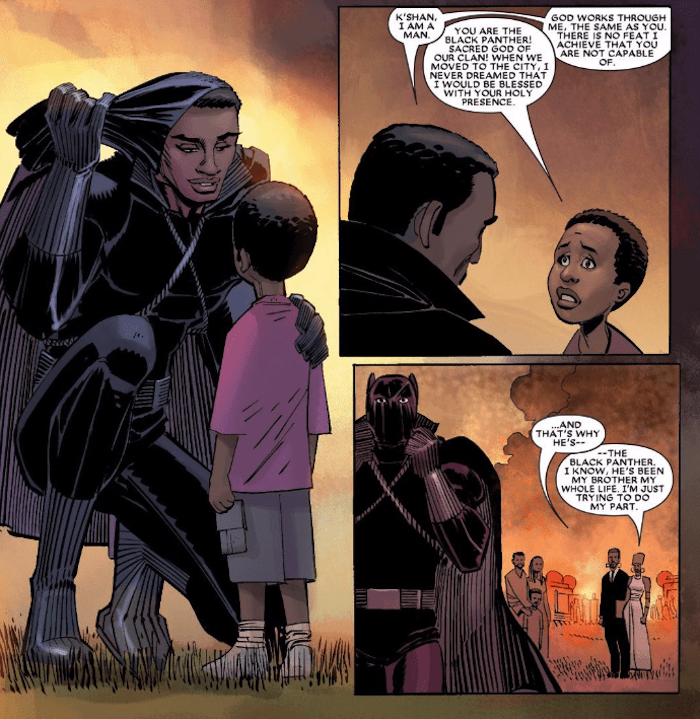 Reginald Hudlin is great at balancing the emotionally powerful with the humorous, never falling into the pitfall of self-seriousness. The writing has a bit of self awareness to go along with its swagger.

Beyond this opening arc though, the collection takes a minute to find its groove. The crossover with X-Men (written by Peter Milligan with art by Salvador Larroca) and House of M are entertaining distractions, but they feel like interruptions before the book gets back on course with the “Two the Hard Way” arc.

Here, Hudlin begins to really shine, using Luke Cage’s experienced point of view to shine a greater light onto Black Panther. When one superhero admires and learns from another, it causes greater admiration for both heroes in the eye of the reader and Hudlin understands and utilizes that fact with great aplomb.

The climax of this collection, and indeed, its running throughline, is built around Black Panther finding a bride. And while marketing during the time may have led to a mystery around who that bride would be, Hudlin never hides the fact that Black Panther’s true love is Storm. This puts the X-Men crossover in context, while Black Panther and Storm had been connected to one another romantically as far back as Chris Claremont’s Marvel Team-Up #100, the relationship had only seen flashes of daylight since, such as in Priest’s Black Panther. To help the marriage seem “valid” in the eyes of fans, bringing Storm into the book earlier makes sense.

Hudlin also adds an unexpected layer of depth, highlighting that for T’Challa this isn’t only a romantic pursuit. It can’t be. He is a king and a king needs legitimate heirs to the throne. Hudlin does a fantastic job fleshing out both T’Challa and Storm (and what it means for a mutant to potentially be the Queen of a nation with as much political weight as Wakanda) and their relationship, and it gives the last third of the book a romance-adventure tone that isn’t often seen in superhero comics.

This lighter tone may not be to everyone’s liking, especially if you’re coming directly off of Priest’s take on the character, which was grittier and had more intricate storytelling. Hudlin’s run tonally feels similar to the older James Bond films, focusing on T’Challa from within his own head, as opposed to the use of a proxy. The politics aren’t absent in this volume, but they are more direct, unafraid of offending with their straightforwardness. United States officials refer to the Wakandans as “jungle bunnies” and the comic doesn’t flinch from the racial factors as to why the rest of the world continually underestimates Wakanda.

While John Romita Jr. and Salvador Larroca carry the front half of the book, the second half is largely handled by artist Scot Eaton. Eaton’s linework is incredibly detailed, and the thicker line weights he uses give inker Klaus Janson a lot to work with. The end result is a book that can change its look depending on the situation. Vampires in the Louisiana Bayou? Thick shadows, and rougher figures. A royal wedding? Beautiful detailing and smooth lines that make everything immaculate. Aiding in all of this is colorist Dean White who provides a visual consistency throughout the book. White uses warmer hues that give the book a heroic feeling, and uses deep blues and purples for sultry night scenes. In the final issue, Kaare Andrews makes a guest appearance for a supernatural sequence, and that transition between the styles of Eaton and Andrews really sells the other-worldliness.

The collection itself is printed well, and the dark blue of the volume serves as a distinctive visual indicator that this is different from the Priest run, so if you find yourself reaching for it on the shelf you can easily pick it out. For supplemental materials, the collection includes an article by Reginald Hudlin that was originally printed in the Who is the Black Panther? trade paperback, an article about the design of Storm’s wedding dress from The Bride as well as images of some of the cover sketches. 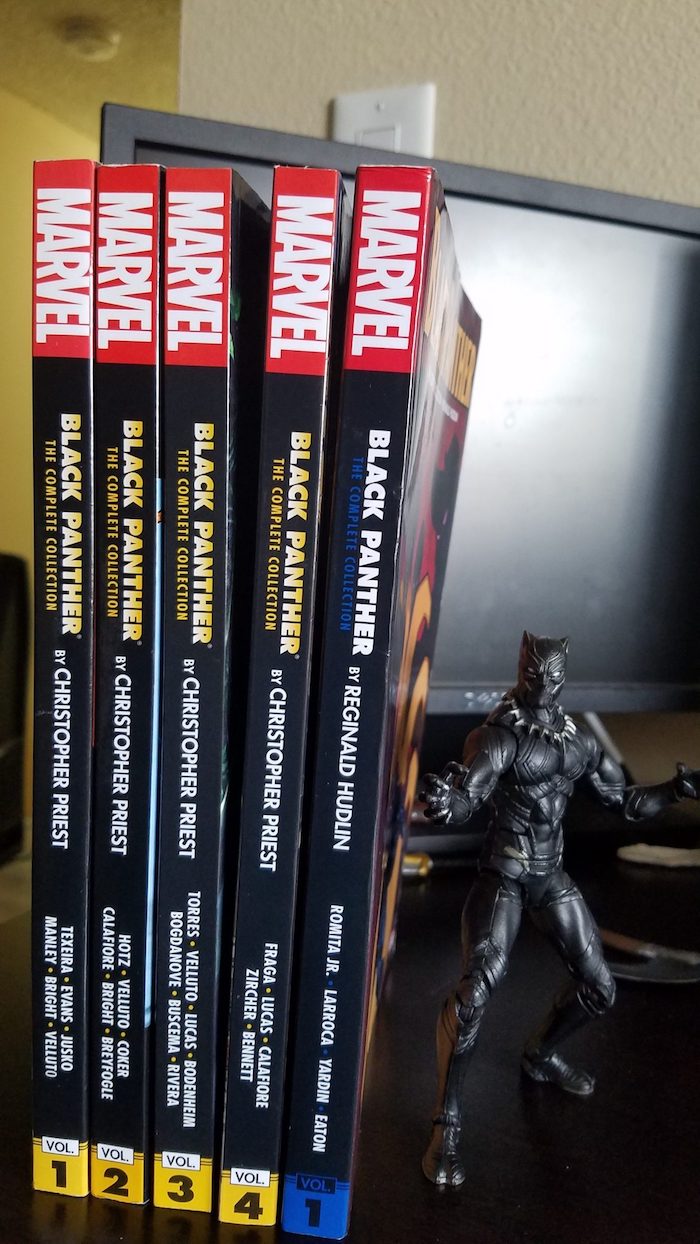 More Sean Connery than Daniel Craig, Black Panther by Reginald Hudlin: The Complete Collection Vol. 1 is swaggering swashbuckling at its finest. Unapologetically black, it presents its titular hero and his kingdom of Wakanda at their highest point, blending afrofuturism, political intrigue, and adventure. There are some hiccups, and the lighter tone may not fit everyone’s tastes, but this is a solid collection that does its titular character proud.

Rating: 8.5 GREAT
Black Panther by Reginald Hudlin: The Complete Collection Vol. 1 is out now at comic shops and will be available at major retailers including Amazon on November 14th.