THE WASHINGTON POST ON THE BLACK PANTHER AND REGGIE WEIGHS IN 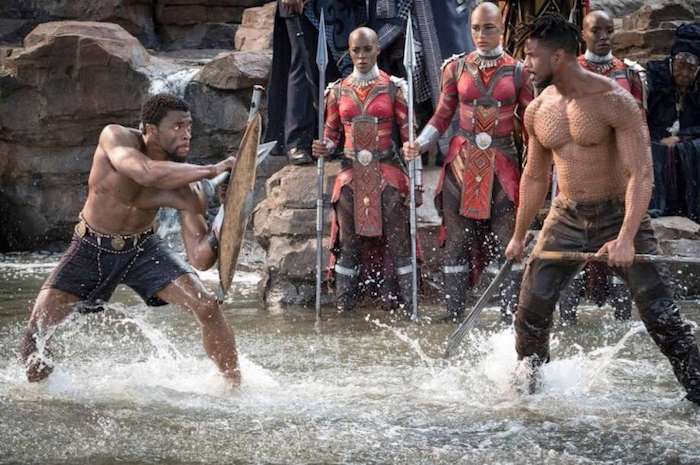 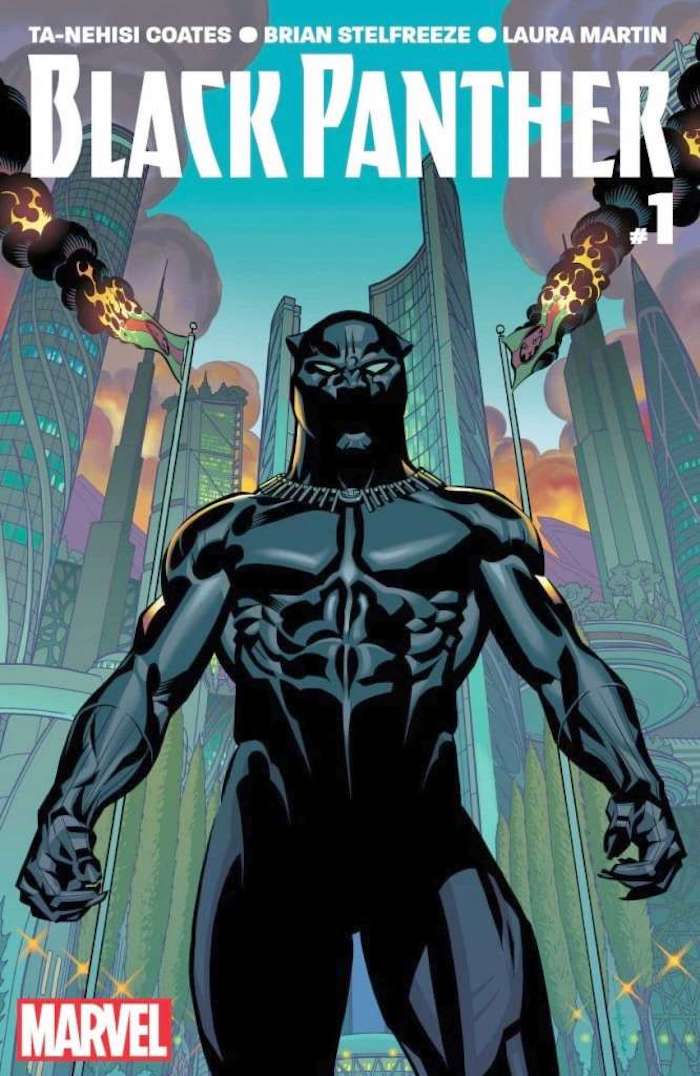 The cover to Black Panther # 1 by Ta-Nehisi Coates and Brian Stelfreeze. MUST CREDIT: Marvel

The crown for the world’s greatest black superhero has always been worn by the Black Panther.

He was also the world’s first. And for more than 50 years, Marvel Comics’ African legend has been hurling a black-gloved fist to the stereotypical notion that superheroesof coloronly work as side characters.

T’Challa, the man under the mask, is a king who rules an African nation that has never been invaded, one that’s the most technologically advanced society in the Marvel universe. He’s been an Avenger, married and divorced a member of the X-Men, and helped fend off aliens. Few Marvel characters come close to matching his intelligence, and he’s traded punches with some of the greatest heroes and villains around and stood tall in the end. Heck, even his grandfather punched Captain America once.

Speaking of the Captain, that indestructible star-spangled shield? It’s made of vibranium, a metal mined only in T’Challa’s Wakanda.

The Black Panther has allowed comic book fans of color to look past the medium’s lack of diversity and take solace in an undeniable fact: He’s simply one of the coolest superheroes around. The rest of the world will probably catch up Feb. 16, when Marvel Studios releases the hotly anticipated, ecstatically reviewed “Black Panther” movie, which is expected to make at least $120 million over its opening four-day weekend.

In 1966, Stan Lee and Jack Kirby created the character to correct the lack of superhero representation – just months before the founding of the Black Panther Party. (To avoid controversy, Marvel briefly changed the name to Black Leopard but later realized that just didn’t have the same oomph.)

The pair – both white – had brought an awareness of civil rights to their work before. In 1963, they created X-Men, who, while drawn as white, faced discrimination for being mutants. Professor Xavier was seen as a Martin Luther King figure, while his friend-turned-enemy Magneto took a by-any-means-necessary, Malcolm X-like approach to prejudice.

In Black Panther’s first appearance, he defeated the Fantastic Four in their own comic. In the years since, fan-favorite runs of three black writers have come to define the character. Christopher Priest in the 1990s made him a no-nonsense hero with an elite all-female bodyguard squad, the Dora Milaje. Hudlin established Wakanda as an unrivaled kingdom in 2005. Ta-Nehisi Coates, author of “Between the World and Me,” took over in 2016 by having the character confront a revolution that questions the legitimacy of Wakanda’s monarchy.

Many of the black superheroes who followed Black Panther beat him to the screen. Robert Townsend directed and starred in “Meteor Man,” a comedic superhero take in 1993. In 1998,the three-film “Blade” franchise, starring Wesley Snipes as a half-human/half-vampire, was perhaps the movie that helped Hollywood realize the box office possibilities for a Marvel character. Eartha Kitt took on the role of the villain Catwoman on the “Batman” TV show in 1967. Catwoman got her own dreadfully reviewed movie starring Halle Berry in 2004.

In recent years, more black superheroes have populated Marvel and DC films, but all in secondary parts, including Cyborg (Ray Fisher) in “Justice League,” the Falcon (Anthony Mackie) in “Capain America: Civil War,” Storm (Berry) in the X-Men movies and Nick Fury (Samuel L. Jackson) in “The Avengers.” As TV has gotten more superhero shows with more diverse casts, Luke Cage and Black Lightning have gotten self-titled series on Netflix and the CW, respectively.

Black Panther’s path to the screen has been rocky. There were rumors of a John Singleton- directed version starring Snipes in the ‘90s, but it stalled because of Marvel’s bankruptcy issues, its horrible box-office track record at the time, executives unable to separate the hero from the same-name political movement and a lack of modern CGI.

At one point,Hudlin – director of “Marshall” and producer of “Django Unchained” – envisioned making the film. He even read a stack of scripts. One had T’Challa growing up in the projects in America, unaware that he was African royalty.

“They were all awful,” Hudlin said. “I just read (them) and said, ‘God, this is everything the movie should not be.’ “

But after Marvel Studios cinematic universe started a decade ago and launched successful series such as “Iron Man” and “The Avengers” – while casting a bunch of white blond guys named Chris – fans knew it was bound to use its rights to the top black superhero.

Chadwick Boseman was cast in 2014, and the character made his first cinematic appearance in 2016’s “Captain America: Civil War.” Ava DuVernay (“Selma”) was in talks to direct his first solo film, but she and the studio had differences of opinion on the story. Marvel hired Ryan Coogler, acclaimed director of “Fruitvale Station” and “Creed,” and cast the star of those films, Michael B. Jordan, as the villain, Erik Killmonger.

Hudlin said he met Boseman shortly after the actor was cast, at an awards event in Los Angeles. The two caught each other’s eye, smiled, and Boseman said, “I know you want to talk about it.” Hudlin walked away from that conversation so impressed that he cast Boseman as Thurgood Marshall in his biopic.

If it is indeed successful, one reason will be that the Black Panther’s ethos goes beyond superheroics and offers a deeper meaning. Salim Akil, co-creator of the”Black Lightning” TV show, said that the character gets at “the connection that a lot of African-Americans want to have with Africa. We lost that part of us, so it’s great to be able to see that in the context of a superhero.”

Evan Narcisse, a writer for Io9 who also co-writes “The Rise of the Black Panther” miniseries with Coates, said T’Challa and his homeland channel a lot of unspoken desire that black readers have for how they want their collective paths to be represented.

“Wakanda represents this unbroken chain of achievement of black excellence that never got interrupted by colonialism,” Narcisse said.

Narcisse, who’s Haitian-American, writes a Black Panther series that is “filtered through my own Haitian identity.”When writing about the Wakandans’ pride in their homeland, he’s able to bring in the pride Haitians feel about achieving independence from France.

“We’re in a political moment where the president of the United States calls people from Haiti and Africa, he calls those countries ‘s—holes,’ “ Narcisse said. “If you’re a young person hearing that … you need to see a superhero that’s smart, cunning and noble who also looks like you. Granted, it’s fiction, but superheroes have always had an aspirational aspect to them.”

Another writer, Roye Okupe, grew up in Lagos, Nigeria, and after graduating from George Washington University in 2009, he created YouNeek Studios, a self-published line of African superhero graphic novels, including “E.X.O.” and “Malika: Warrior Queen.” Okupe said “Black Panther” has an opportunity to show mainstream viewers that there are ways Africa can be portrayed aside from the usual war and corruption. He said he hopes that after its success, “people around the world writing stories like this about Afro-futurism, high- concept fantasy stories based on African culture and African mythology, can be given an opportunity to pitch to movie studios, pitch to TV networks.

“It’s not just about shoving African-ness into your face. It’s showing the different side of a culture that you don’t necessarily get to see all the time.”

As for hardcore fans on Black Twitter, they made the hashtag #blackpanthersolit trend before the movie was even in production. In recent months, many have tweeted GIFs and viewed trailers repeatedly, and watched as the cast – which also includes Angela Bassett, Sterling K. Brown, Lupita Nyong’o and Forest Whitaker – tweet images of their characters.

Marvel sees “the impact of Black Twitter, and they’re using that to their advantage by creating this mass marketing machine around it,” said Jamie Broadnax, founder of the geek culture site Black Girl Nerds.

“Black Panther” is on pace to sell more advance tickets than any superhero film in Fandango’s 18-year history. Actress Octavia Spencer is planning to buy out a theater in Mississippi for kids of color, and ESPN journalist Jemele Hill is organizing a screening for 200 students in Detroit.

Broadnax said the reason for the hype is simple.

“I truly believe that most people in this world want to see diversity in their entertainment,” she says. “I think there’s a large contingent of folks out there that actually want to see a different kind of superhero.”