The Black Movie Soundtrack II at the Hollywood Bowl – Spectacular! 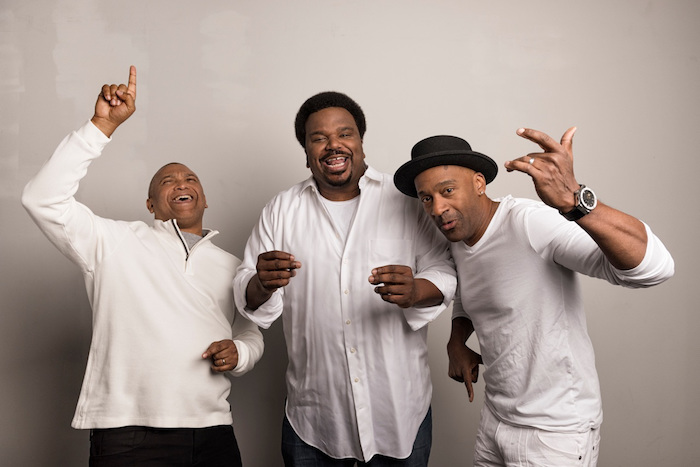 On Wednesday, August 31, 2016, at the famed Hollywood Bowl – Kenneth ‘Babyface’ Edmonds, Charlie Wilson, Marcus Miller, Gladys Knight, Common, Philip Bailey, Lalah Hathaway, Verdine White and Ralph Johnson to name a few shared the stage for an evening that host Craig Robinson called “a hug for your soul.” And that it was. The Black Movie Soundtrack II, a live event created and produced by filmmaker Reginald Hudlin, Grammy-winning bassist Marcus Miller, and the Los Angeles Philharmonic Association in association with the Academy of Motion Pictures Arts and Sciences (AMPAS) paired live performances with clips from some of the best and favorite Black movies from the 1940’s to 2014. Producer Reginald Hudlin more than delivered on his promise that this year’s show would be the “sickest show ever.”

The night began with a montage of movie scenes (edited by the very talented Laura Gibson) featuring Black actors that we know and love (Sidney Poitier, Lena Horne, Denzel Washington, Samuel Jackson, Halle Berry, Spike Lee, Angela Bassett) to the “Theme from Shaft,” the Oscar winning song that sounds as good (if not better) than it did when we first heard it in 1972. In a recent interview, producer Marcus Miller revealed that Isaac Hayes “once told me he was asked to shorten the track. He stuck to his guns, which absolutely contributes to the epic feeling of the tune.” The crowd roared in its affirmation that the song deserved every award it received.

You knew you were in for a night filled with surprises, when the crowd whooped it up after seeing the infamous scene from “Waiting to Exhale,” you know…the one when Angela Bassett as Bernadine Harris, calm cool, and collected as ever sets her soon to be ex-husband’s car on fire after finding out that he was unfaithful and wanted a divorce.

First up was the fantastic “Hellzapoppin”, a 1941 movie with a dance sequence like you’ve never seen before featuring Black dancers Slim Gaillard, Slam Stewart, and Whitey’s Lindy Hoppers doing the Lindy Hop. Host Craig Robinson explained that the dance scene was filmed as a self-contained sequence so that the dance scene could be cut out of the movie when it was shown to Southern audiences. To the delight of the audience, Robinson quipped that “Today, we call them Trump supporters.”

The next stop was the Black Exploitation period where Isaac Hayes’ “Theme from Shaft” was performed by none other than the energetic and ageless Charlie Wilson (Uncle Charlie), the wonderful Kenneth “Babyface” Edmonds, and the sultry songstress Lalah Hathaway (yes – Donnie’s daughter). Accompanied by the Hollywood Bowl Orchestra under the direction of Vince Mendoza, and the Marcus Miller combo, the music was simply heavenly when required and funky when necessary. Babyface would command the stage with his performance of “Super Fly,” from the 1972 film of the same name. His performance was followed by Lalah Hathaway’s performance of “Ghetto Boy, with both songs written by the late, prolific, and gifted songwriter Curtis Mayfield.

When scenes from the movie “Claudine” appeared on the screen, you knew it was time for the magnificent and lovely Gladys Knight, who performed three of the six songs written by Curtis Mayfield for “Claudine”: “Make Yours a Happy Home,” “The Makings of You,” and “On and On.” Did I mention that guitarist Marcus Miller, (the baddest bass player ever) accompanied Knight for this soulful walk down memory lane?

The magical night continued with a tribute to the visionary founder of Earth, Wind, and Fire – Maurice White, from Philip Bailey, Verdine White, and Ralph Johnson who performed a scrumptious medley accompanied by the outstanding guitar work of Paul Jackson Jr: “Got to Get You Into My Life,” “That’s the Way of the World,” and “September.”

After intermission, the show continued with Marcus Miller and the Hollywood Bowl Orchestra performing the 1986 tune “Under the Cherry Moon,” setting off a tribute that brought hundreds to their feet, lighting up the Bowl with their camera phones in a moving tribute to the artist we love and miss – Prince. Wilson and Hathaway performed “Take Me With You,” Chance Howard (a former Prince backup singer) movingly performed “When Doves Cry.” Alice Smith sang “If I Was Your Girlfriend,” Wilson returned to the stage performing “Baby, I’m a Star,” and Hathaway ended the tribute with a soul-stirring cover of “Purple Rain.”

Then it was truly party-time as the hip-hop group Full Force took the stage following scenes from the cult-classic, “House Party,” (a Reginald Hudlin film). Full Force got it poppin’ with “Ain’t My Type of Hype,” (among a medley of other songs– “Poison,” “Hold Up, Wait a Minute”) from the aforementioned movie with a special appearance by one of the stars of the movie, AJ Johnson (Sharane in House Party) whose dance moves proved that age is nothing but a number.

The show’s finale featured the Oscar winning artist Common and Alice Smith performing the Oscar and Grammy-winning song “Glory,” written by John Legend and Common from the movie “Selma.” As co-host Robinson said, “It didn’t get all the praise it deserved but the music reaches into our souls with honesty and truth.” It was a fitting ending to a phenomenal night. As Cheryl Boone Isaacs said, President of AMPAS said, “Black movie music matters.” The good news? Producer Hudlin said at the top of the show, “I’m already planning a third installment. I’ve still got 100 songs to go.” Oh…glory!